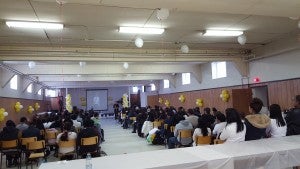 Friends attend a memorial for Jason Sibug who was a temporary worker in Canada. ROD CUNANAN  PHOTO

RED DEER, Alberta – “I will die honest and pure honest, and pure for what I love,” was Jason Sibug’s last entry on Twitter before the Royal Canadian Mounted Police (RCMP) found his lifeless body in his basement room on February 5.

The police department has not disclosed the official cause of death except to the victim’s next of kin in the Philippines.

The 29-year-old Filipino from Tolosa, Leyte arrived in Canada in 2013 as a temporary foreign worker for Canadian Tire in Athabasca, Alberta. He immigrated from Malaysia through employment agency Cornerstone Staffing Corporation.

A graduate of hotel and restaurant management in the Philippines, Jason was a breadwinner in his family of five siblings.

According to friend Rod Cunanan, Jason reported for work on February 5 and came home early at past 5 o’clock complaining that he felt ill. His housemate gave him pain medication, which he refused. They did not disturb him to let him rest for the evening.

At around 6 o’clock, Jason’s girlfriend, Maria “Gab” Pelagia, who works an hour away received a message from Jason saying that he was in distress. Because she couldn’t leave her job, Pelagia immediately informed a close friend who called Jason to comfort him.

After Jason calmed down, he told his friend that he felt better. Nonetheless, his friend called the RCMP detachment in Athabasca, but there was no answer.

Pelagia said Jason wanted to talk to her as usual, but she was tired from working until one in the morning that day. They talked briefly at around 4 o’clock as she was heading to work. The RCMP called her later that evening to obtain more details.

RCMP showed up at the residence around 9 o’clock. Cunanan said when the RCMP officers arrived, they did not allow Jason’s housemate into the room but instead proceeded to take his remains to their RCMP detachment in Edmonton for autopsy.

RCMP has been in contact with Jason’s employer at Canadian Tire, but has kept mum to his acquaintances about the details of his death said Cunanan.

Jason appeared withdrawn weeks before his death, according to Pelagia. He was also giving away some of his things and had been preparing to send a balikbayan box, she said.

“I did not have a clue that those were signs of his depression,” Pelagia said in an interview.

She and Jason had met at a sports festival in Athabasca, organized by Jason. She said of Jason’s character, “Mabait, maalaga, gentleman (Kind, caring). Masarap magluto (A good cook).” She said that his favorite dish to cook for her was the traditional pansit (noodle).

Other friends described Jason as outgoing, jolly and involved in organizing community activities such as basketball tournaments for the Filipino community in Athabasca.

Nympha Mondana, who acts as the group’s “elder sister,” had known Jason since he moved to Athabasca. She stayed at the staff house on the weekends where Jason lived. Because she also likes to cook, she said they were always a tandem during occasions with her cooking food and Jason making in cocktails.

She noticed some subtle changes in Jason’s behavior in the weeks leading up to the incident. “He had not been working out like he used to and was less frequently eating with us,” she said, noting that Jason had said he wanted to save money.

She described Jason as a talented and a hard worker.

Mondana, a resident of Athabasca for four years who started out as a live-in caregiver, said that Athabasca is a close-knit community and home to some 100 Filipinos.

Located 145 km north of Edmonton City, Athabasca only has one mental health specialist for its 3,000 residents, according to its website. Mental health services are offered through the community health center in town. A provincial crisis line for mental health help can also be used 24 hours daily.

But these services are not easily accessible to foreign workers due to the lack of awareness of their availability, said Cynthia Palmaria of Migrante Alberta. She added that although there are resources, they are not tailored according to the unique socio-cultural background that newcomers bring with them as immigrants.

In a statement, she said, “Jason’s plight as a temporary foreign worker here in Canada represents the struggles and hardships that most temporary workers in our community are experiencing.”

“To be uprooted from your family and friends in order to survive and support your family has become a harsh reality [as a result] of lack of decent opportunities in the Philippines,” added Palmaria.

She underscored the lack of resources for newcomers especially in rural areas where isolation could have a huge impact on their mental health.

Jason’s group of friends led by Rod Cunanan has started raising funds to support his family.

Cunanan said Jason’s family has decided to cremate his remains. “Jason’s mother originally wanted to see his body, but they have no means to pay for the repatriation of the remains. It would cost approximately  $12,000 as opposed to cremation and sending his ashes to his family in the Philippines at $3,000.

Serenity Funeral Homes has been tapped to provide the funeral services. A trust account in Jason’s name has also been set up.

Cunanan wrote to Honorary Consul Esmeralda Agbulos in Edmonton, asking for assistance in sending the remains. He is awaiting the official’s response as she is away on vacation.

Lenard Lesage, Canadian Tire Athabasca owner, also vowed to help. “Jason will be deeply missed. He was all you could ask for in an employee, he was punctual, friendly, always wanted to learn. We enjoyed working with him.”

Because of his work ethic, Jason became a store supervisor last fall and was in the process of applying for permanent residence, Lesage said.

A memorial service for Jason was held at the Church of St. Gabriel in Athabasca on February 15.

Read Next
WWII vets’ supporters try to untangle crossed lines
EDITORS' PICK
Would the military allow me to stay this long if I’m inutile? – Duterte
65% of Filipinos say Duterte’s health should be made public – SWS
Pre-order the new vivo Y20s [G] to get a free TWS earphone
In good spirits: SMDC helps farmers and residents through Kadiwa Market
Smart three-peats as country’s fastest mobile network – Ookla
DSWD chief admits ‘slow start’ in distribution of aid in ‘NCR Plus’
MOST READ
Vico Sotto frets getting photos of ‘butt vaccination’ from Pasig dwellers
Metro Manila to have shortened curfew hours from 8 p.m. to 5 a.m. under MECQ
San Miguel Corp. continues to invest heavily in the Philippines’ future
COVID-hit Roque slams ‘un-Christian’ query on how fast he secured hospital bed
Don't miss out on the latest news and information.