Call for a 5th UN Office in Korea

In the South, ruling party officials called for their government to development its own nuclear deterrent to address the growing nuclear threat from North. 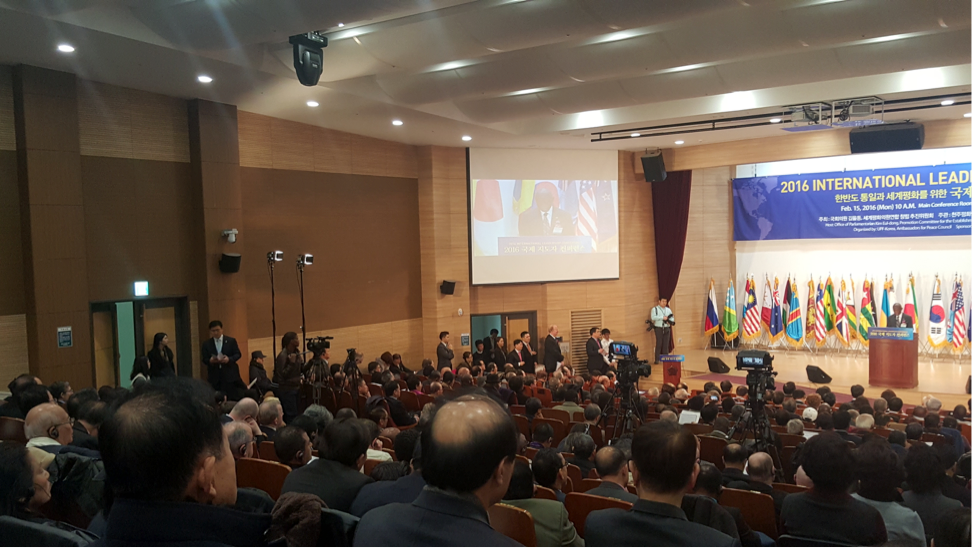 “We cannot borrow an umbrella from a neighbor every time it rains,” Hon. Won Yoo-Cheol of the ruling Saenuri Party said at the National Assembly today. “We need to have a raincoat and wear it ourselves,” Won said as quoted by the Yonhap news agency.

Against this background of strained ties escalating tensions between the two Koreas, the Universal Peace Federation (UPF) offered an alternative solution. To help ease tensions on the peninsula and reduce fears in northeast Asia parliamentarians from around the world joined with up to 20 Korean lawmakers scheduled to attend the session in support of establishing a 5th UN office in Korea.

From abroad as many as 150 members of parliament, including six cabinet ministers, from more than 40 nations attended a program today at the National Assembly Members’ Hall in chilly Seoul, the capital of South Korea. There were also over 40 international journalists in the audience.

The program was initially focused on the formation of the International Parliamentarians Peace Association. But against this backdrop of mounting pressures the event took on a sense of renewed political urgency.

Hon. Chung Ui-hwa, Speaker of the National Assembly of Korea, welcomed fellow lawmakers amidst renewed provocations on the peninsula. He said this kind of careless behavior from north Korea could be addressed effectively by demonstrating a united will and collaboration from parliamentarians all of over the world and thanked them for their support.

The keynote speech was given by Dr. Sun Jin Moon, the Chair of the Universal Peace Federation (UPF) International and the daughter of the UPF co-founders, the late Dr. Rev. Sun Myung Moon and his wife Mrs. Hak Ja Han Moon.

Dr. Moon spoke on behalf of her mother and also called for the UN to consider an Asian office. “Whereas, there are UN Headquarters Offices in New York, Geneva, Vienna and Nairobi, there is no such office in Asia, even though we are living increasingly in an Asia Pacific age. In many ways, the geopolitical, economic and social center of gravity of our world is shifting toward Asia.”

Earlier, Hon. Kim Eui-dong a national assembly-woman from Korea also called for the UN to establish a 5th office in Korea. She said the UPF program was a “very significant event” that could help bring about a unified Korean nation that has been divided for 70 years.

In a video message from US Congressman, Hon. Ed Royce he said he submitted a bill in Washington calling for more and stronger sanctions against north Korea. Other speakers included members of parliament from Liberia, Jordan the Czech Republic and Malaysia.

Rounding out the list of MPs from abroad who spoke on the occasion was Hon. Ek Nath Dhakal, the Minister of Peace and Reconstruction for the Government of Nepal. He said Nepal recently promulgated a new, democratic and inclusive Constitution and was now poised to move into a new era of socio-economic transformation. Then, deviating from his prepared speech, he said his government would also support the establishment of a 5th UN office in Korea and offered the best wishes from Nepal’s Prime Minister, H.E. K.P. Oli, to the audience.

The Universal Peace Federation is an NGO in Special Consultative Status with the Economic and Social Council of the United Nations. The Founders are Rev. Dr. Sun Myung Moon and his wife Dr. Hak Ja Han Moon from Korea; Dr. Sun Jin Moon is UPF’s International Chairman.