Bets will promise anything to get elected–Aquino 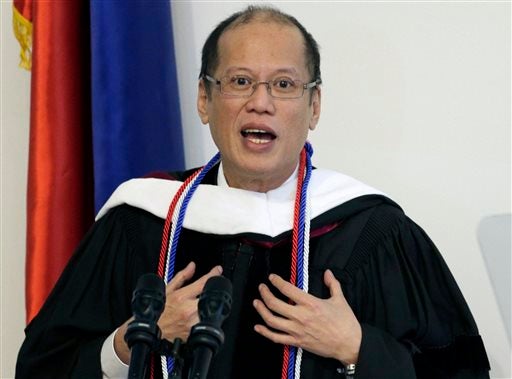 LOS ANGELES—Candidates will promise anything to look good before voters and get their support, President Aquino told Filipinos here, but there are only two whom he would vouch for as true leaders of the country.

These are the administration standard-bearer Mar Roxas and his running mate Leni Robredo, he told the members of  the Filipino community here on Wednesday (Thursday in Manila).

Addressing a crowd of 700 to 800 at the Hilton LAX hotel, Mr. Aquino reminded them of the approaching date of the elections in the Philippines.

He said he himself was excited about the polls because these would allow the continuation of his “straight path” governance and make permanent the change that the country has been enjoying.

But he warned that there were opponents with their own strategies to court voters.

“For example, there are those who want to raise SSS (Social Security System) pensions. The problem is, what they promised can’t be sustained,” said Mr. Aquino who earlier vetoed a bill that Congress had passed increasing the pensions of SSS retirees.

Candidates should not base their campaigns on just promises and photo opportunities, they must provide something useful, the President said.

“If you want to know those who just want to look good, just look at their campaign posters. Some of them look so different in pictures and in real life. They’re just starting to introduce themselves to you, and they’re already pretending,” he said.

He joked that since he has to face a lot of people in person, he would not have his hair photoshopped in pictures.

“The thinning of my hair is part of my job. I just go for what is true,” he said.

For Mr. Aquino, Roxas and Robredo represent something genuine.

“If we’re going to talk about who is the most sincere, I think it is important to ask: Who has made a sacrifice?” he said.

“When it comes to a leader, what people need is someone who helped carry the burden and who thinks of the country first before self,” he said.

“If you ask me, it is very clear to me who have been proven to have made a sacrifice: They are Mar Roxas and Leni Robredo,” he said.

Many in the audience applauded when the President pitched for Roxas and Robredo, but not all were for the President’s candidates.

LA-based Arturo Garcia leads a group that is campaigning for Sen. Grace Poe. Garcia said he believes in Poe’s sincerity and defended her from the criticism that she had taken US citizenship when she lived in the United States.

He said many here are angry at the criticism thrown at Poe, which he described as “Fil-Am bashing.”

He said Filipinos abroad are hailed when they send remittances back home and help the economy, but when election time comes, they are no longer considered Filipinos.

The President said Filipinos in the United States registered as absentee voters, or those who have sway over their relatives in the Philippines, can do their part by ensuring that the positive gains of the country would grow to benefit future generations.