70th anniversary of the infamous Rescission Act of 1946

This infamous bill was passed by the US Congress on February 18, 1946, 70 years ago this week. It was supposed to be a simple appropriations measure authorizing $200 million to the Commonwealth Army of the Philippines, which was desperately needed by a military decimated by three years of war with the Japanese. The bill got its name from the insidious legislative rider attached to it which provided that “service in the Commonwealth Army of the Philippines should not be deemed to have been service in the military or naval forces of the United States.”

The rider would effectively rescind the Executive Order signed by Pres. Franklin D. Roosevelt on July 26, 1941incorporating the Philippine Commonwealth Army into the United States Army Forces of the Far East (USAFFE) which promised full U.S. veterans’ benefits. After this Executive Order was issued, more than 100,000 Filipinos enlisted in the Philippine Commonwealth Army and were sworn in as members of the United States Armed Forces.

Towards the end of the war, Sen. Carl Hayden, the chair of the Senate Committee on Appropriations, sought information from the Veterans Administration about the Filipinos serving in the US Army and the potential cost of their veterans’ benefits.  In response to Sen. Hayden’s query, Gen. Omar Bradley, Secretary of the U.S. Veterans Administration, wrote that Filipinos who served in the Philippine Commonwealth Army and their dependents were entitled to receive about $3 billion in benefits. 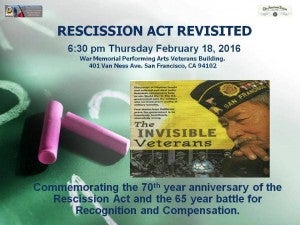 Sen. Hayden and his colleague, Sen. Richard Russel, the head of the conservative coalition that ruled the U.S. Congress, were determined to cut federal spending and focus the resources of the government on U.S. soldiers returning back to civilian life at the end of the war. In their view, the Filipino soldiers in the U.S. Army were expendable because the Philippine Commonwealth Government was to be granted independence on July 4, 1946 so they would no longer the problem of the U.S. government.

Hayden and Russell moved to substantially reduce U.S. military aid to the Philippines by passing the first Rescission Act in January 1946 but it was promptly vetoed by Pres. Harry Truman.

The veto was cheered by Philippine Commonwealth Pres. Sergio Osmena who wrote Philippine Resident Commissioner Carlos P. Romulo on February 12, 1946 to express his elation at the veto because it was “a blessing in disguise as far as the Philippines is concerned.”

If Truman had signed the bill into law, Osmena warned, “members of the Philippine Army will unjustly be deprived of the benefits of the following federal laws at present being enjoyed and made available to them by virtue of their service with the military and naval forces of the United States (including)… the G. I. Bill of Rights … educational aid or a refresher or retraining course not to exceed four years… the 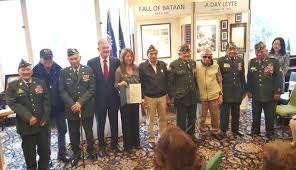 guarantee of loans for the purchase of homes, farms and business property; and readjustment allowances for veterans if unemployed within 2 years from his discharge. .. Automatic gratuitous insurance against death in line of duty in active service occurring on or after October 9 1940 and on or before April 12, 1942 … Pension for non-service connected disability…Medical and hospital treatment and domiciliary care of veterans suffering from injuries or diseases incurred or aggravated in line of duty including funeral and burial expenses… Vocational rehabilitation for disabled veterans… Civil service preference…Six months’ death gratuity to dependents of deceased personnel who died in line of duty.”

Osmena further explained to Romulo why Truman was right to veto the bill: “the amount of $200,000,000 appropriated is evidently inadequate for the payment of the benefits it intends to confer. It is at present estimated that approximately 70,000 members of the Philippine Army who were in the active service of the United States died during this war. Assuming that 20,000 of these deceased veterans applied for insurance at $10,000 each, the total amount due their dependents would be $200,000,000. The dependents of the remaining 50,000 with an average insurance of $5,000 each would be entitled to $250,000,000. Aside from these insurance benefits, the bill likewise provides for the payment of pensions for service-connected disability or death. Under the present federal laws, dependents of deceased veterans are entitled to pension or compensation ranging from $50 to $100 a month. Taking an average pension of $65 a month for each dependent of 70,000 deceased veterans, the government would be paying $4,500,000 a month or $49,000,000 a year. Assuming that the average number of years that a dependent is entitled to receive this pension is 15 years, the total amount due for death pension alone would be $735,000,000. As regards pensions for physical disability, it is estimated that out of the

members of the Philippine Army inducted into the service of the United States Army including recognized guerrillas, there are at least 5 per cent who are disabled or approximately 10,000 servicemen whose percentage of disability ranges from 10 to 100 per cent and would therefore be entitled to a monthly compensation of from $11.50 to $115 according to present rates, excluding additional pension for those who lose the use of hands, legs or eyes. With an average disability pension of $50 a month 10,000 soldiers should get $500,000 a month or $6,000,000 a year. Physical disabilities in most cases are permanent and the disabled veteran continues to receive the disability pension during his lifetime. Taking 15 years as the average life of a pensioner, the total sum of $90,000,000 would be due the disabled veterans. Summing up, the amount payable for insurance and pension benefits alone total $1,275,000,000 which is approximately seven times more than the amount appropriated.”

The U.S. Congress was not deterred by Truman’s veto and passed virtually the same Rescission Act on Feb. 18, 1946. This time, however, to Osmena’s chagrin, Pres. Harry S. Truman signed it into law on Feb. 20, 1946.

Before signing the bill into law, Pres. Truman took the opportunity to criticize it.

“In approving H.R. 5158, I wish to take exception to a legislative rider attached to the transfer of a $200,000,000 item for the pay of the Army of the Philippines. The effect of this rider is to bar Philippine Army veterans from all benefits under the G.I. Bill of Rights with the exception of disability and death benefits which are made payable on the basis of one peso for every dollar of eligible benefits. I realize, however, that certain practical difficulties exist in applying the G.I. Bill of Rights to the Philippines.

However, the passage and approval of this legislation do not release the United States from its moral obligation to provide for the heroic Philippine veterans who sacrificed so much for the common cause during the war.

Philippine Army veterans are nationals of the United States and will continue in that status until July 4, 1946. They fought, as American nationals, under the American flag, and under the direction of our military leaders. They fought with gallantry and courage under most difficult conditions during the recent conflict. Their officers were commissioned by us. Their official organization, the Army of the Philippine Commonwealth, was taken into the Armed forces of the United States by executive order of the President of the United States on July 26, 1941. That order has never been revoked or amended.

I consider it a moral obligation of the United States to look after the welfare of Philippine Army veterans.”

The Rescission Act of 1946 reduced the obligation of the U.S. government to take care of its war veterans who were Philippine citizens from a legal to a moral one, an obligation based on conscience rather than on law.

Some 62 years later, on April 24, 2008, Sen. Daniel K. Inouye criticized the anti-Filipino discriminatory intent of the Rescission Act enacted by Congress in 1946.

“Congress took this action in spite of the fact that Filipino veterans in our armed forces rendered services that were identical to that rendered by other, non-Filipino soldiers who were American nationals or who held United States citizenship. Thus, the Filipino veterans that fought in the service of the United States during World War II are precluded from receiving most veterans’ benefits which were available to them before 1946, and which are available to all other veterans of our armed forces regardless of race, national origin, or citizenship status,” Inouye said.

Instead of receiving what Pres. Osmena estimated to be $1.25 billion or what Gen. Bradley estimated to eventually be worth $3 billion, the Philippines was to receive only $200 million.

Three months after the Rescission Act became law, on May 22, 1946, Gen. Carlos P. Romulo, as Resident Commissioner of the Philippines, spoke on the floor of the US House of Representatives and denounced the US Congress for passing the Rescission Act calling it “an act of discrimination” against Filipinos and declaring that “the $200-M which were purportedly in lieu of benefits of which Filipino veterans were thus deprived, are actually not sufficient to cover the back-pay entitled by these veterans. The Philippine government has chosen NOT to accept the appropriation.” 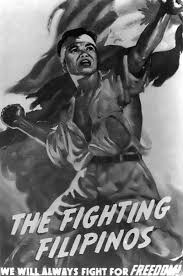 According to Gen. Delfin Lorenzana, Veterans Affairs Liaison of the Philippine Embassy in Washington DC, there is no record that the $200 million allocated to the Philippines by the Rescission Act of 1946 was ever given to the Philippine Army after Gen. Romulo rejected it.

But almost $200 million was eventually given to Filipino WW II veterans. It came almost 63 years later, on February 13, 2009, when Pres. Barack Obama signed into law the American Recovery and Reinvestment Act of 2009 which included, ironically enough, a legislative rider providing $198 million to Filipino WW II veterans in the form of a tax-free $15,000 for each of the Filipino veterans who are US citizens and $9,000 for each of them who are non-US citizens.

Though a mortal enemy of the United States during WW II, Japan received billions of dollars in US aid after to rehabilitate its infrastructure and restore it back as an industrial power. In contrast, a staunch ally of the US, the Philippines received a mere pittance in rehabilitation funds. Instead of $3 billion that should have gone to the Philippines, the post-war aid was reduced to $200 million, which was rejected by Gen. Romulo who famously quipped about his height: “I’d rather be a dime among nickels.”

The Philippines is rich in moral obligations.