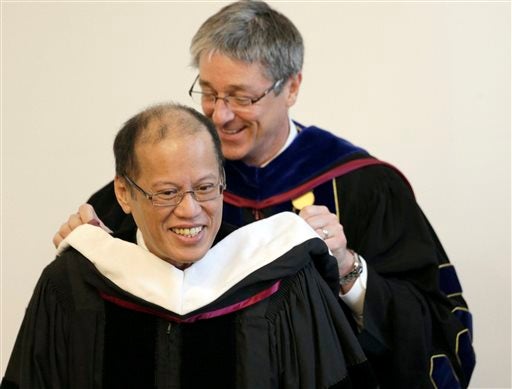 LOS ANGELES—With the Philippines’ arbitration case up for resolution by midyear, President Benigno Aquino III called on the international community, including China, to abide by the decision of the United Nations court on the maritime dispute in the South China Sea.

Mr. Aquino, stressing the primacy of the rule of law, spoke on Tuesday, the second day of the special summit between the United States and the Association of Southeast Asian Nations (Asean) in Rancho Mirage, California.

Discussion on Day 2 of the summit focused on protecting peace, prosperity and security in the Asia-Pacific region.

With rising tensions in the South China Sea, Asean members should act as one and lead the charge in getting all countries to respect the rule of law, Mr. Aquino said.

“In this regard, confronted with the common challenges in the South China Sea, it is crucial that Asean collectively and in a unified voice urge all countries to share with us full respect for the rule of law,” he said.

Everyone should respect the decision of the UN Permanent Court of Arbitration in The Hague on the maritime dispute, he said.

“For this purpose, it is especially important that we all commit to abide by the decision of the arbitral tribunal. In this manner, we will avoid chaos in our relations and ensure greater stability, predictability and security,” he said.

China has refused to take part in the proceedings, but the tribunal has heard the case and is expected to hand down a decision by April or May.

Aside from the Philippines, Vietnam, Malaysia and Brunei have also staked claims to parts of the South China Sea, nearly all of which is claimed by China.

The United States has challenged China’s sweeping claims, sending warships close to artificial islands that Beijing has built in the South China Sea to assert freedom of navigation.

On Wednesday, China was reported to have placed an advanced surface-to-air missile system on Woody Island, in the Paracel chain, claimed also by Vietnam and Taiwan.

The United States condemned China’s “militarization” in the South China Sea, saying the missile deployment was raising tensions in the region.

“If you deploy such armament, it means you intend to use it. That’s the one thing that it really impacts on the security of the region,” Lopez said.

The party-list group Bayan Muna on Thursday urged the Philippine government to strongly protest the missile deployment, saying China could use Woody Island as a base for an attack on the Philippines.

Rep. Neri Colmenares, the group’s senatorial candidate in the national elections in May, said China’s militarization in the Paracels chain was an “act of war” that would further aggravate rising tensions in the region.

“Even though the surface-to-air missile launchers they deployed are on Woody Island, which is part of the Paracels claimed by Vietnam, if left questions that China may deploy missiles [on] Philippine territory,” Colmenares said.

Former Akbayan Rep. Walden Bello, also a senatorial candidate, said China’s move was a reaction to the United States’ harnessing Asean for its own military and economic goals in the Asia-Pacific region.

“There is likely to be a US countermove. Reactive escalation is the name of the game now, and the Philippines made the foolish decision to take sides in a superpower conflict instead of maintaining neutrality,” Bello said.

“This sweeps us into the dynamics of a superpower conflict while marginalizing the resolution of the territorial issues in the West Philippine Sea,” he added, using the name by which the Philippine exclusive economic zone in the South China Sea is locally known.

With the resignation of Foreign Secretary Albert del Rosario, Bello said the Philippines should review its US and China policies and adopt a “more independent foreign policy, stressing the diplomatic track of getting its Asean partners to get China to live up to its 2012 commitment to negotiate a code of conduct [in the South China Sea] and the legal track employing the UN (Convention on the) Law of the Sea.”

Davao City Mayor Rodrigo Duterte, a presidential candidate, criticized the United States for its “late and lame” actions in trying to halt China’s expansionism in the South China Sea.

Duterte said the US 7th Fleet was in the region and Washington should have used it to make China understand that its activities in the South China Sea were a violation of international law.

“The US could have shown stronger support then. Now it seems late and lame. They should have immediately stopped China then and told them [that their construction of] man-made structures in the disputed areas [was a violation of international law,” he said.

“Why did it have to reach this far? Now [China] allegedly [has] missiles deployed in the area. Had the US [stopped China’s] bullying quickly, we will not be facing this kind of problem,” he said.

Sen. Antonio Trillanes IV, a candidate for Vice President, said the Philippines should denounce the missile deployment and commisserate with Vietnam and Taiwan.

China’s latest move in the South China Sea should make the Philippines more vigilant and focus on modernizing its military, Trillanes said.

Sen. Francis Escudero, also a candidate for Vice President, told Inquirer editors and reporters on Wednesday night that the government should be open to “exploring all peaceful avenues,” including bilateral talks and back-channel efforts, to resolve the Philippines’ territorial dispute with China.

Escudero also underscored the need for patience in resolving the dispute.

“For as long as the next President does not let go of the claim, does not sell out, it doesn’t have to be settled within the term of the next President. It can be a work in progress and an ongoing dialogue for as long as it doesn’t break out into war,” he said. With reports from Julie M. Aurelio, Gil C. Cabacungan, Nancy C. Carvajal, Jeannette I. Andrade and Nikko Dizon