Obama made the pitch after he personally welcomed the leaders of the 10-member Association of Southeast Asian Nations (Asean) as they arrived at the Sunnylands estate for the two-day summit between the United States and the regional bloc. It is their first meeting as strategic partners.

President Aquino is one of the Asean leaders who flew to the United States for the gathering.

Aside from maritime security and the simmering dispute over the South China Sea, the focus of the summit includes economic relations.

The promotion of an innovative, entrepreneurial Asean economic community is the first topic the leaders tackled at the summit.

The Asean is the United States’ fourth largest goods trading partner and Obama’s meeting with the regional leaders is expected to improve their trade relations.

“Together we can continue to increase the trade and economic partnerships that create jobs and opportunity for our people,” Obama said in his opening remarks.

Trade between the United States and the Asean improved by 55 percent since he took office, Obama noted. This includes US exports that support more than 500,000 American jobs.

The United States also provides the largest source of foreign direct investments in the region, which Obama credited for the growth in Southeast Asian countries’ gross domestic product.

US companies had more than doubled investments in the region since 2008, White House National Security Adviser Susan Rice told reporters.

Obama also congratulated Asean for its move to integrate its members’ economies in order to create a single market and production base in the region.

“Here at this summit, we can build on this progress and do more to encourage entrepreneurship and innovation so that growth and development is sustainable and inclusive and benefits all people,” he said.

The United States is courting most members of the 10-nation bloc to join the free trade deal among Pacific nations called Trans-Pacific Partnership (TPP).

“The US president announced the US-Asean trade workshop, a series of workshop which will work with countries in Asean to help them understand the provisions and requirements of the TPP,” US Secretary of Commerce Penny Pritzker said in a press briefing on the sidelines of the summit.

The TPP, one of the biggest multinational trade deals, was signed recently. In the United States, however, it still awaits ratification by Congress.

Among Asean countries, Brunei, Malaysia and Vietnam have joined the trade deal among 12 nations led by the United States and Japan. China, which has overtaken the United States as the world’s largest exporter, was left out of the deal.

Mr. Aquino earlier expressed Philippine interest in joining the TPP and even asked the United States to assist the country in becoming a member.

Ben Rhodes, a US deputy national security adviser, noted that the negotiation process for the TPP had been beneficial for the Asean members.

“You have countries like Vietnam that have agreed to new provisions that raise the standards of labor rights in their country. That’s an important step forward,” Rhodes said. 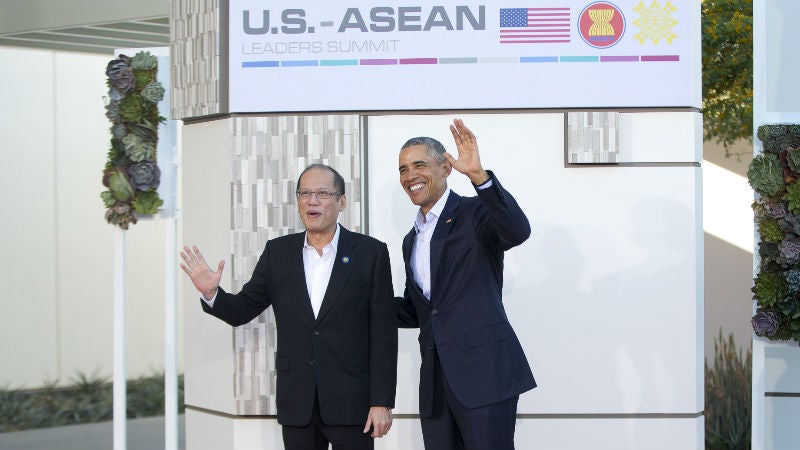 President Barack Obama, right, stands with Philippine President Benigno Aquino III, left, at a meeting of ASEAN, the 10-nation Association of Southeast Asian Nations, at the Annenberg Retreat at Sunnylands in Rancho Mirage, Calif., Monday, Feb. 15, 2016. Obama and the leaders of the Southeast Asian nations are gathering for two days of talks on economic and security issues and on forging deeper ties amid China’s assertive presence in the region. (AP Photo/Pablo Martinez Monsivais)

“We believe TPP sets that baseline standard that countries can begin to meet in order to receive the benefits of the deal,” he added.

A few kilometers from Sunnylands in Rancho Mirage, over a hundred protesters were gathered on the street carrying US flags and those of different Asean countries. Some aired their grievances over the TPP, which will cut tariffs on foreign goods.

Rick Macias, one of the protesters opposing the TPP, said thousands of Americans would lose their jobs if the TPP was put into effect.

Mr. Aquino arrived at the Sunnylands estate around 3:40 p.m. on Monday (Tuesday in Manila) where he was greeted by Obama at the entrance.

The two leaders exchanged smiles, shook hands and posed for a picture before the US leader escorted Mr. Aquino to the venue of the first round of talks.

Obama then returned to the entrance to welcome the next Asean leader to arrive.

Also at the summit, Laos President Choummaly Sayasone, the Asean chair for this year, promised to work closely with the United States and other regional bloc members to ensure that their strategic partnership will bear fruit.