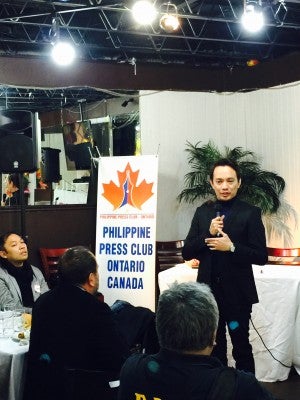 TORONTO, Ontario — Joseph Morong, 2015 winner of the Marshall McLuhan Fellowship Award for investigative journalism, traded insights with members and guests of the Philippine Press Club of Ontario, Canada on the evening of February 10.

A senior reporter with GMA Network Inc., Morong has over 15 years of journalism experience covering the justice and political beats for the network.  He is also an anchor, with Jessica Soho, of NewsTVLive, the network’s flagship newscast that discusses pressing current issues. 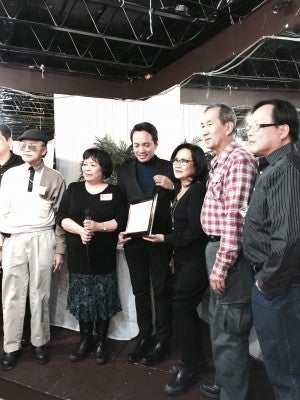 Morong received the prestigious award in August 2015, which the “Canadian Embassy in Manila, in partnership with the Center for Media Freedom and Responsibility (CMFR), gives every year to a Filipino journalist for outstanding work in the field of investigative reporting,” says member of the Canadian Senate Tobias Enverga Jr., who honored Morong with a certificate of recognition.

The fellowship is funded by the Marshall McLuhan Estate via the McLuhan program at the University of Toronto and administered by the Canadian Embassy in Manila.   The awardee’s travel expenses are sponsored by Sunlife Financial Inc.

The fellowship is named after Marshall McLuhan, the famous communication theorist-philosopher, and consists of a two-week familiarization and lecture tour of Canadian media and academic institutions.  Afterwards, the fellow holds a lecture tour of Philippine universities under Canadian Embassy auspices.

“The Government of Canada supports the initiatives being carried out by the Philippines, and has provided $800,000 in humanitarian aid through the International Organization on Migration, and over PhP128 million in security assistance in support of the Bangsamoro Peace Process,” adds Senator Enverga. 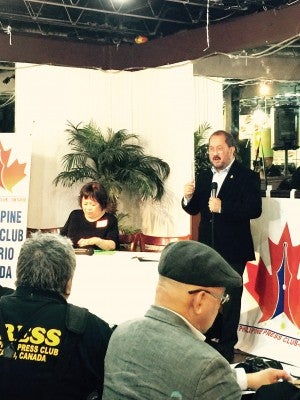 At the forum, he discussed “Communicating the message of the marginalized: Media coverage of the Bangsamoro Peace Process in Southern Philippines.”  This is in line with the Canadian government’s stance that a strong independent media are crucial to the workings of a true democracy.

The fellowship program was begun by the McLuhan Estate in 1997 and coordinated by the Manila-based CMFR, assisted by the Canadian Embassy.   Eighteen investigative journalists have been awarded the fellowship since its inception.

A very lively question and answer period, moderated by Hermie Garcia, publisher and editor of The Philippine Reporter and past PCCO president, followed.