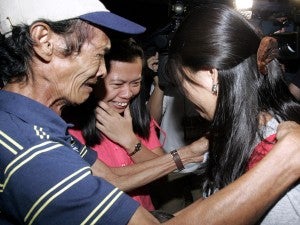 Jaime Rivera, left, cries upon seeing his daughter Diana, right, who works as a nanny in Libya, upon her arrival Saturday in Manila. AP

Two Filipinos employed as housemaids by a nephew of former Libyan leader Moammar Gadhafi and who were rescued by Philippine Embassy officials in Tripoli were all smiles when they arrived at the Ninoy Aquino International Airport Saturday afternoon.

Diana Jill Rivera and Mary Ann Ducos Almario, both in T-shirts and jeans, expressed their joy at being back to reporters who waited for them at the Naia arrival area.

“We’re so happy that we were able to return home. You’ll never know how happy we are,” said Rivera in Filipino.

She said they had nothing but the clothes on their back when they were fetched by Manila’s labor attaché to Libya, Nasser Labatt Mustafa, on Sept. 19.

“We were unable to take anything when we left the house. The clothes we are wearing were given to us by the embassy,” she said.

Mustafa, who arrived with the women, narrated how he managed to get the women out of a house in an area surrounded by soldiers loyal to Gadhafi.

He said that he got in touch with the women by mobile phone and that they said they wanted to go home.

“We communicated through the phone but at first we could not locate which house they were in,” Mustafa said.

He said he scoured the residential area, accompanied only by a Libyan national who acted as his interpreter, trying to figure out which house the Filipinos were in.

He said the women themselves did not know where they were and only provided a general direction and description of the house.

“On Sept. 3, when we sensed we were in the right area, I asked the girls to do something that I could see from the road,” he said. “Then Mary Ann went up to the roof and waved frantically.”

He said that after locating the house, embassy staff planned an escape route. He said 11 days passed before they decided “this will be the day.”

He said the “rescue ‘’ had to be carried out two days earlier than planned after the house of Gadhafi’s nephew was raided by Libyan rebels.

“They texted me that they had to leave that day because they feared that if they stayed longer and the raiders came back, they could be hurt,” he said.

In the end, Mustafa said, embassy officials were able to enlist the assistance of the rebels in rescuing the women.

He said the Filipinos were told to board the “getaway” car at around 6 a.m. on Sept. 19, and the vehicle sped away and did not stop until it reached the embassy.

Mustafa said that two Filipino housemaids of another Gadhafi relative had opted to stay in Libya. “We are in touch with them and they say they are safe,” he said.