US: We’ll use only PH bases under Edca 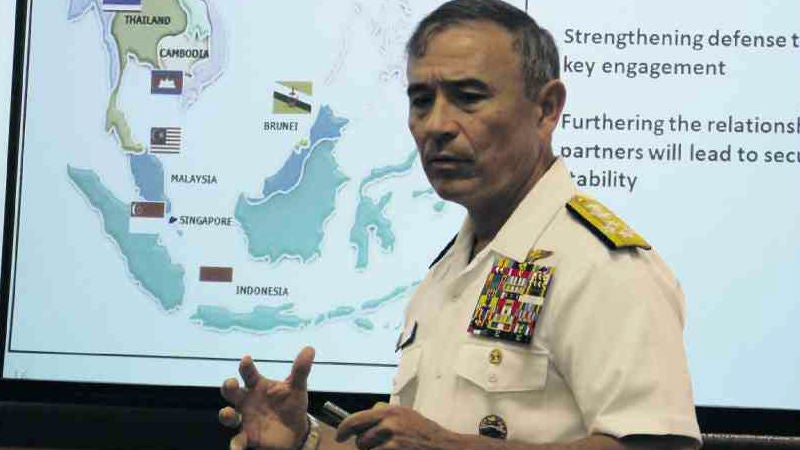 CAMP H.M. SMITH, Honolulu—The United States has no plans of building American military bases in the Philippines even with the Enhanced Defense Cooperation Agreement (Edca) between the two countries, according to the commander of US forces in the Pacific.

“[The Edca] is an agreement between the US and [the] Philippines [that] will allow us to use some Philippine bases and allow us to improve infrastructure at those bases. It is not about [establishing] new American bases, it is about using Philippine bases,” Adm. Harry Harris Jr., chief of the US Pacific Command (Pacom), told reporters at a recent briefing here.

Harris avoided the question whether the United States would step up the frequency of its South China Sea naval patrols now that it was getting access to Philippine military bases.

“[The Edca] was challenged in the Supreme Court. Now we have a green light. We are involved in the planning now,” Harris said without giving details.

The Philippine Supreme Court upheld the constitutionality of the Edca last month, ending more than a year of uncertainty caused by a challenge to its legality mounted by some lawmakers and left-leaning groups who feared the security deal would allow the United States to build new military bases in the Philippines.

Harris said Manila and Washington were working on the “prioritization of bases and the possible infrastructure improvement” the United States would provide.

“This will help the Armed Forces of the Philippines, but it will also help us. It is for our mutual benefit,” Harris said.

“Infrastructure improvements to Philippine bases would enhance support capabilities for a rotational presence of US forces and assets,” US Air Force Capt. Cody Chiles, spokesperson for Pacom, said when asked for details of the improvements plan.

In a presentation to journalists ahead of US President Barack Obama’s meeting with the leaders of the 10-member Association of Southeast Nations (Asean) at Rancho Mirage, in Sunnylands Estate in California, Harris explained why the South China Sea and Asean, including the Philippines, were important to the United States.

“Southeast Asia is at the heart of the Asia-Pacific region and is the central pillar to [the] US rebalance to the Pacific,” Harris said, referring to Obama’s strategy of shifting the US defense focus from the Middle East to Asia.

“The leadership of Asean as a whole is key to the rules-based international order in the whole region,” he said, explaining why the United States continues to strengthen its defense ties with Asia-Pacific countries, five of which—the Philippines, Japan, South Korea, Thailand and Australia—are already its treaty allies.

The United States carries out annual joint military maneuvers with those countries, exercises that Harris called “investments for a reason.”

The United States faces challenges in the region, Harris said.

“We see an assertive China, a resurging Russia. There is a thousand miles of Russian coastline in the Asia-Pacific region, which includes strategic nuclear and submarine bases,” he said.

“There is a proliferation of weapons of mass destruction, that is North Korea, although five countries in Asia-Pacific are nuclear-capable,” he added.

The United States is leading the global opposition to North Korea’s nuclear ambitions and it is championing freedom of navigation to counter China’s claim to almost all of the 3.5-million-square-kilometer South China Sea.

To bolster that claim, China has built artificial islands on seven reefs in the Spratly archipelago that could be used for military purposes, raising tensions with rival claimants to territory in the South China Sea—Brunei, Malaysia, the Philippines, Vietnam and Taiwan.

The seven artificial islands are within the exclusive economic zone of the Philippines, which has taken the dispute to the United Nations Permanent Court of Arbitration in The Hague for resolution. A decision is expected by June.

Analysts said a more constant and increased US military presence in the Philippines through the Edca would slow down China’s expansion in the South China Sea.

President Aquino may be expected to raise China’s expansionism at the Sunnylands summit, according to Presidential Communications Secretary Herminio Coloma Jr.

Mr. Aquino “has always represented the Philippines’ position on the importance of ensuring freedom of navigation and overflight” in the South China Sea, as well as adherence to international law in resolving disputes in the strategic waterway, Coloma said in Manila on Sunday.

The President leaves for the summit today, accompanied by Foreign Secretary Albert del Rosario and some Cabinet officials.

On Wednesday, Del Rosario disclosed a proposal for the rival claimants in the South China Sea to meet on the sidelines of the summit, but it was uncertain if the leaders’ schedules would allow for it.

Obama proposed the summit during the third US-Asean meeting in Kuala Lumpur in November last year, following the decision of the leaders to elevate their relations to the strategic-partner level.

In a statement issued in December last year, the US government said the summit aimed to provide leaders a forum to strengthen cooperation under the new US-Asean strategic partnership on political, economic and security issues.

Briefing reporters in Malacañang last week, Assistant Foreign Secretary Hellen Barber-de la Vega said it would be the first meeting between Asean and the United States as strategic partners.

The summit aims to “explore how Asean and the [United States], after elevating their relations to the strategic-partner level, can work more effectively together and especially now with the establishment of the Asean Community,” De la Vega said. With reports from Leila B. Salaverria and Jerry E. Esplanada in Manila