WB exec gives up career after finding love in PH 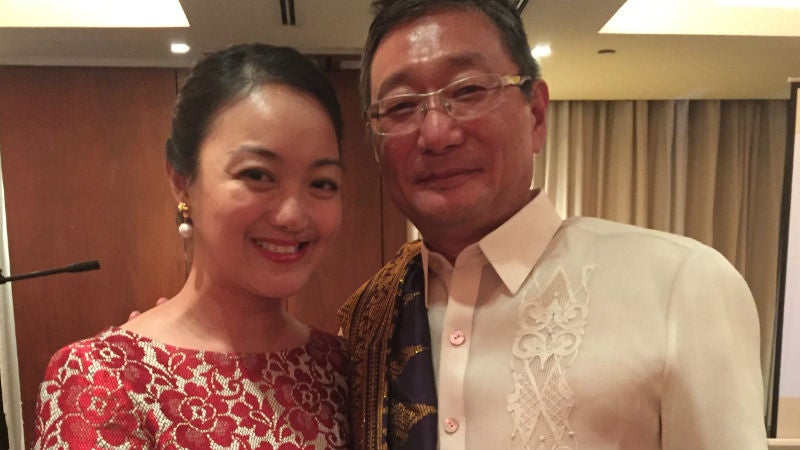 This World Bank executive spent the last 35 years of his life catalyzing programs to reduce poverty, develop infrastructure and promote inclusive growth across Asia and Africa.

But Japanese national Motoo Konishi—who always wanted to retire in a place where he could roam around in shorts and flip-flops—found an even more compelling reason to spend the rest of his life in the Philippines.

Living here in the last four years as World Bank’s country director was a life-changing experience for Konishi, who found sheer joy in helping the government implement social safety nets and other development programs.

To top it all, he fell in love with a Filipino who matches his lifetime passion for development work.

So when his term as country director ended last month, Konishi decided to leave the bank ahead of what would have been his mandatory retirement schedule in 2024. He also decided to retire in the Philippines.

Konishi publicly announced his commitment to Jorge, who is nearly two decades his junior, on Jan. 28 in a farewell party hosted by the World Bank at Taipan in Tower Club, thus making the big romantic gesture with top government officials, development partners and civil society leaders serving as witnesses.

“This is not something that I should be proud of but this is the first time I have made my personal decision over my commitment to the World Bank. And my commitment here is to Ching—that I’ve actually chosen her over my career,” Konishi said during that party.

Guests applauded and clinked their glasses, obliging Konishi to give his future bride a kiss.

“I think that that is something he has given a lot of thought to and finally for the first time in his life, after 35 years of being committed to the bank, he is finally choosing his own personal interests. I feel loved and flattered and it’s probably the best decision he has ever made in his life (laughter). But seriously, it goes both ways, I am as committed to him as he is to me,” Jorge told the Inquirer.

The couple met a few years back in an event hosted by the Australian embassy at the residence of then Ambassador Bill Tweddell.

Jorge was doing the usual rounds—making small chats and serendipitously ended up at the same cocktail table with the jovial Konishi.

Their initial meeting started with a nice, comfortable conversation until the questions from Konishi started coming in droves, leaving Jorge feeling like a student being quizzed on serious stuff such as education policy, budget reform and governance. But it only made the evening more interesting for both of them.

It was not exactly love at first sight but both knew from the start that they would be great friends.

Jorge was careful about getting into a new relationship, having been single for many years. She is a single mother to 11-year-old Lia, a talented artist and musician and a scholar at The King’s School Manila.

Konishi is a divorcee with two adult sons: Masaru, 27; and Shigeru, 24. One is working in the United States and the other is working on his PhD.

From Konishi’s reckoning, there was a strong intellectual attraction as soon as he met her at that diplomatic reception. He felt very comfortable and relaxed discussing different issues with her.

Although much younger, Jorge can hold her own fort when it comes to social discussions, especially those concerning the Philippines.

Apart from her work at Bato Balani, she is the founding chair and president of Young Public Servants, an organization that aims to harness a new generation of leaders who support and advocate democratic citizenship and good governance.

She also chairs the League of Corporate Foundations, the largest network of corporate foundations in the country and a former board member of the Association of Foundations.

She is also the managing trustee of the International Center for Innovation, Transformation and Excellence in Governance (INCITEGov), a Manila-based policy think-tank that aims to develop and operationalize a policy agenda that links democratic politics, good governance and development outcomes in critical reform areas.

She is also an Asia21 Fellow (Asia Society Young Leaders Program) and is lead convener of one of the country’s leading alliances for voter’s education and election reform—Youth Vote Philippines.

“From the time we met, we focused on the friendship, the intellectual exchange and the different things we shared in common, including our family relationships and values before it eventually blossomed into something more. I was surprised at the level of attraction that seemed to grow every time we would get to know each other. This was something that I had never expected, having been really focused on my daughter Lia, my work and volunteer activities,” Jorge said.

She was also impressed with the commitment and passion that Konishi had for his work and for his sincere desire to make life better for those who cannot help themselves.

Konishi considers his stint in the Philippines as the “greatest job” he’s had during his 35-year professional career. “In my four years here, I’ve seen the passion, the drive to make this country great,” he said.

As he now contemplates his life after World Bank, he indicated that he would continue to help this nation.

“I’m not sure what I can offer but I will be available,” Konishi told the guests during the farewell party.

Konishi received his Bachelor of Science degree in International Economics from the Clarement McKenna College (United States) and his M.A.L.D. in development economics, international law and international business from the Fletcher School of Law and Diplomacy (United States). He joined the World Bank in 1981 through the Young Professionals Program.

Early on in his career, he worked on transport projects and other sectors in Eastern and Southern African countries. As a transport economist, he led teams that formulated multi-year programs of institutional, policy reforms and investments to improve infrastructure and transport services.

In 1992, he was appointed World Bank’s resident representative for Tanzania where he served until 1995. As principal country officer for Kazakhstan from 1995-1997, he was directly involved in crafting the bank’s strategy of cooperation with Kazakhstan and played a lead role in the preparation and implementation of the Treasury Modernization Project in Central Asia and the Legal Reform Project in Kazakhstan.

Both of Konishi’s sons are very supportive of their father’s decision to retire in Manila. Also, Motoo’s brother Takeo is based in Manila working at the Asian Development Bank.

“He has been so dedicated to his life and work that it is truly exciting to see how much of that passion he wants to bring here to help in whatever way he can for our country. I’ve always believed that every little good thing we do amounts to bigger things in the future. I derive my inspiration and motivation from the work that I do on governance, education, the youth, with grassroots communities, with our volunteers and I am happy that he has that same motivation within him. I know that he can be not only a partner in life, with me and Lia but also a partner in doing what we can to share to contribute to nation building,” Jorge said.

Konishi said he was still searching for what he could do for the country and community. But he said it would be nice to do something that would give hope and opportunity to young people for a better life.

He was given the same opportunity as a Japanese going abroad with his parents, experiencing something many Japanese had never done after the war. He and his siblings were thus raised to become the “bridge between Japan and the US and the rest of the world.”

Now, he said this would be his chance to “pay back to the society for the opportunities that we were given.” He would like to do this with the help of big corporations as part of their corporate social responsibility.

He would also like to do something on early childhood development, to making sure that the first 1,000 days of all Filipino children will be taken care of with the three basic needs: immunization, proper nutrition as well as proper physical and mental interaction.

“Motoo is very excited about the process of reinventing himself and being able to contribute to society here in the Philippines. All his life he has been travelling and moving from place to place and finally he has a more permanent home and life,” Jorge said.