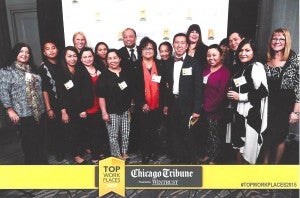 CHICAGO–You are forewarned this story of a Filipino American-owned home health care agency is NOT about fraud or someone sentenced to prison. Surprisingly, it actually brings good news.

The five-year-old MedPro ranked 7th among those in the first category. Considering the unfavorable and embarrassing news associated with home health care agencies owned by Filipino Americans, it is surprising to learn that MedPro is owned by not one but FOUR kababayans.

So what makes one a TOP Work Place? In a detailed survey sent out by the Tribune, questions were primarily aimed at knowing a company’s work policy and actual practice in creating a healthy environment for their employees to thrive happily in their work places.

MedPro President/CEO Riz Villaseñor told PINOY Newsmagazine, at the firm’s office in Tinley Park, a suburb in the southwest of Chicago, that his company has a “Growing Up Clinic,” which helps its employees and their children to improve their physical, emotional and intellectual potentials.

Psychologists, therapist and trainers are involved in their growth. “A day care center in MedPro’s HQ is also in the works,” added Villaseñor.

Further, he said, “MedPro also discovered the benefits of bringing parents and even grandparents to work, so they get a better appreciation and understanding of what their respective children do at their place of work.”

To achieve this, MedPro has started a “Take Your Parents To Work Day,” where parents come to watch and sit with their children after a short presentation on MedPro, its values and processes.

On a recent Monday morning, representatives from MassMutual Financial were giving free presentation about the need to start retirement funds in anticipation of supplementing future Social Security benefits. MedPro’s 401K plan will be available to qualified employees by February 15.

It was followed by a weekly report from Villaseñor about the state of the company. The attendance from the work force is impressively big. He started with a brief reminder about the MedPro culture, which is summed up in an acronym, EPIC, meaning Ethical, People-Driven, Innovative and Compassionate.

Villaseñor also enumerated the firm’s operating principles as Trust, Transparency and Accountability. The secret of their success, he this reporter earlier, is “there is no secret.” He proved this during the meeting by calling on his top-ranking staffers to report on where the company currently stood.

MedPro has 243 active employees and partners plus 372 independent contractors which include registered nurses, physical therapists, doctors and administrative personnel.

“Yes, we make patients well and we have a weekly discharge planning meeting,” according to Villaseñor. The past January broke a record of 231 admissions. In 2015, the company had 1,991 total admissions. It processes 2,000 clinical notes a week. Numbers that would elicit envy in the home health care industry.

MedPro serves not only Medicare beneficiaries, but also Medicaid and almost all managed care companies, where reimbursements are not as lucrative as Medicare patients.

“You have to be in this business for the right reasons; in MedPro we don’t ask how much reimbursements do we get from a patient, but we ask How much care does the patient needs?” Villaseñor added.

In the meeting four women marketers (curiously, no Filipina) reported their activities from their market area of 11 counties—all from the contiguous counties of Northeast Illinois. The referrals were mostly from physicians from major hospitals. No “hustling” in senior activity centers or the like.

Villaseñor confided that at one time someone wanted to refer a patient and asked on how much he would get in “referral fee,” actually a kickback. He was promptly shut off. The referrer was tactfully told that was not allowed by Medicare rules and regulation.

”We attract more business because of our ethical principles. We gain referring physicians’ trust because of our transparency and accountability,” he said. “Maximizing our use of the latest technology afforded us to open our books not only with doctors we work with but also among the partners in the company.”

He added that company accountants are under instruction to readily open the books in anticipation of any questions on finances. This is the secret why he and his three partners are still together. “Trust is invaluable,” he repeated all over again.

Riz Villasenor used to work for Ohio-based Cardinal Health, a $100-billion health care company listed on the New York Stock Exchange. He is thankful for the corporate lessons he learned from this huge health provider.

When he moved to the Chicago area in 2009, his cousin, Dr. Maria Rhodora Chan, introduced him to Philip Castillo (a medical technologist ), Tony Ocampo (a registered nurse) who were venturing into home health care.

After brainstorming about what they wanted to see in such kind of business, they decided to create the company that is “like no any other.” MedPro was founded in 2009.

Riz’s wife, Marilou, another registered nurse, would be made Director of Nursing; Philip’s wife, Ana, and Tony’s wife, Evelyn, are also RNs are also involved in the company.

Dr. Chan and her husband, Jaye Chan, have recently moved to the West Coast. Jaye retains his interest in the company and is also working remotely to help out in its Therapy Department. All partners get credit for their “sweat equity.”

In a manner of diversification, the three partners who are in Illinois and their spouses took over the struggling “Philippine Cuisine” in Crestwood, Illinois. They renovated and renamed it “Sandok n Palayok” and opened to favorable reviews from diners.

This venture is clearly a concession to Riz’s passion for cooking. He has a long list of concepts that he thinks will bring memorable dining experience. Philip takes care of the “karaoke” entertainment while Tony, the day to day operation. They look forward to expanding to a combination sari sari-restaurant operation to serve the growing Filipino community in the Chicago southwest suburbs.

Villaseñor is a natural leader and entrepreneur. An honor student from Boac, Marinduque, his brilliance was noticed by the then Local Government secretary in late 1970s. He became a leader of the Kabataang Barangay in Marinduque. He holds an MBA from Ateneo and a master’s in Public Administration from University of the Philippines.

He worked as a realtor in the Los Angeles area in the late 1980s, then moved to Ohio until he settled in llinois. He and his wife. Marilou, have two children, Rimar, 27, currently working in Wall Street, New York and a daughter, Mariz, 23, a graduate student in Speech Therapy.

Rizaldy (his full name) Villaseñor’s academic credentials, experience, sound business principles plus his ability to partner with the right people are the potent ingredients in achieving the success that MedPro Health Providers has achieved.

The recipe is no secret. Villaseñor and his associates want those who are in this business of providing crucial health care in the community to put the best interest of their patients as their top priority. Along with that is to give importance to the roles of their workers in achieving the mission of one’s company.

Villaseñor is never shy to share the message. Do things correctly and success follows. It’s for the common good. He truly wishes everyone in the industry well.