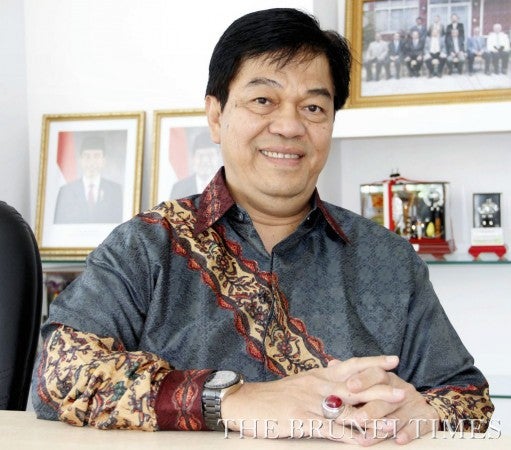 Indonesia is keen to develop cooperation with Brunei Darussalam in the tourism sector as it presents itself as an avenue to support economic diversification in the country.

Minister Counsellor for Economic Affairs at the Indonesian Embassy in Brunei Rudhito Widagdo said: “We are ready to promote tourism cooperation with Brunei such as through visits or by organizing discussions based around tourism.

He noted that tourism industry and investment can improve the trade balance of both countries.

The number of tourist arrivals from Indonesia to Brunei and vice versa has gradually decreased over the past few years pointing to tourist arrivals via air to Indonesia from Brunei for last year which stood at 12,992 compared to 13,307 and 18,109 in 2014 and 2013 respectively.

“We are so close geographically, we have cultural similarities and speak the same language (Malay), but the numbers of tourist arrivals from Indonesia to Brunei and from Brunei to Indonesia are relatively small,” he said.

As a comparison, he went to add, last year alone numbers of tourist arrivals to Indonesia from the Philippines was about 140,000, while from Cambodia and Vietnam was 110,000 and over 70,000, respectively.

Therefore, he said, there is a need for collaborative efforts between Indonesia and Brunei to improve tourism industry of both nations.

To attract foreign tourists in general, he underscored the importance of promoting interesting places, ensuring adequate human resources of the tour operators, providing good hospitality, services and transportation, including airplanes and public transportation.

To promote the country’s tourism, the embassy here is planning to organize a series of activities such as familiarization trip to Indonesia and a festival namely Wonderful Indonesia, which includes sales mission event and cultural performances in the programs.

It was previously reported that trade volume between Indonesia and Brunei stood at $863.5 million in 2013, up from $675.6 million the previous year.

Oil and gas contributed to the majority of Brunei exports, accounting for 85 per cent of total exports.

Proposed Bayanihan To Recover As One Act reaches House plenary