Anywhere but in gentrified San Francisco 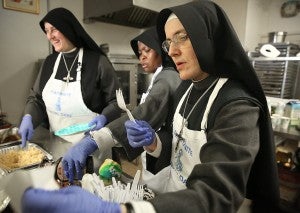 The nuns of Fraternité Notre Dame Mary of Nazareth face eviction from their soup kitchen for the homeless in gentrifying San Francisco. CHOWHOUND.COM

Every day, there’s a story that illustrates the severity of the wealth and income inequality that’s become a San Francisco trademark.

Just when you thought the crisis’ impact on its most vulnerable residents could not get any more cruel, we read about nuns in the city, who help the homeless, being evicted. The San Francisco Chronicle reports that the sisters of the Fraternité Notre Dame Mary of Nazareth, who run a soup kitchen in the Tenderloin, one of the city’s poorest neighborhoods, have had their rent increased dramatically.

The “building’s owner wants the nuns to pay the higher rent or leave,” the report said. The sisters could barely afford the previous rent of $3,465 and now it’s $5,500 a month.

We spoke to lawyers representing the landlord and the nuns, and it looks like negotiations (which have been going on for the past three years, according to Michael Heath, the landlord’s lawyer) could restart as early as next week, after his client arrives from India.

Filipino immigrants, their nuns and priests

This is the kind of story that would outrage Filipinos, who come from one of the most Catholic countries in the world, where the religious are treated with honor.

Here in the U.S., the religious play a significant role in the lives of many self-sacrificing immigrant Filipinos, who send big chunks of their money back to their families in the Philippines, and then donate some of what’s left of their paycheck to the church.That’s because we recognize that the religious are our allies as immigrants.

The religious help and provide sanctuary for undocumented Filipinos, come to the aid of our less privileged kababayan in need and inspire us to develop the fortitude to weather the indignities of immigrant life, like discrimination and racism.

For many of us, church is where we find and meet community and build a network of friends who become the families that we might not have in this new country.

The nuns who face eviction, Sisters Mary of the Angels, Mary Benedicte and Mary Valerie, serve as mothers to the homeless that they feed.

“Those sisters are kindness personified. The city should help make sure that there’s a place for them to continue their work that’s safe and clean,” said Supervisor Jane Kim, a leading voice in the city’s housing crisis, who serves in the district where the sisters run their soup kitchen. We’re hoping Mayor Ed Lee is listening and ready to help.

But Dan Fitzpatrick, lawyer for the nuns, says his clients are looking at the truth of the situation. They see that the people they serve will one day no longer be in the Tenderloin. “This is the reality of gentrification,” said Fitzpatrick.

We’re guessing that the negotiations could turn out this way: The rent may stay at the original level, or go up only very slightly. In exchange, the nuns would have to leave within a specific, limited period of time. They will have to act quickly to find a new location for their soup kitchen, a place where their services are most needed.

It’s highly likely that they will move out of San Francisco.

The story of the sisters could be a foreshadowing of the future of many nonprofits that help underserved populations in San Francisco. When the poor they serve are pushed out, then their reason for existence will cease. Their mission will have to be fulfilled elsewhere, wherever it is that the people who need their help move. Anywhere that’s not gentrified San Francisco. Rich people can take care of themselves.

Remember how nuns, armed with rosary beads and holding up statues of the Virgin Mary, faced down soldiers and stopped tanks during the EDSA People Power revolution that finally overthrew the Marcos dictatorship 30 years ago? We have a chance to return that favor now, EDSA’s anniversary month, by helping these sisters.

The nuns are having a fundraiser.

We Filipinos respect and love our nuns and priests for what they do for us. It’s time we did something for them.

Vivian Zalvidea Araullo is a multi-award winning journalist. She is also the executive director of West Bay Pilipino Center, a San Francisco nonprofit that helps underserved Filipino immigrant youth, families and seniors. The opinions reflected here are her own, and do not represent any organization she is associated with. Contact her at [email protected]