Stage reading of play ‘People Power’ to be held in Toronto 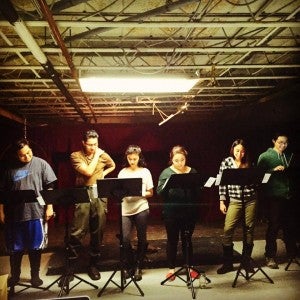 TORONTO, Ontario – A staged reading here of the play “People Power” will commemorate the 30th anniversary of the 1986 EDSA Revolution, which overthrew the dictatorship of Ferdinand Marcos.

Carlos Bulosan Theatre will present the play, “which follows the events of the revolution primarily from the perspective of regular citizens versus the iconic figures,” says CBT artistic producer Leon Aureus.

“The staged reading will be presented with multimedia components,” he adds. It will be held at Artscape Sandbox, a new arts center in downtown Toronto.

A panel discussion will follow, exploring how much has or hasn’t changed since those days of great hope and inspiration.

Written by Aureus, Rose Cortez, Nicco Lorenzo Garcia, Christine Mangosing and Nadine Villasin with poetry by Leonard Cervantes, the play was originally produced in Toronto in 2005 and restaged in Montreal in 2008.

The reading will be preceded the day before with “Tayo Na! New CBT Artists Showcase,” a cabaret-style show featuring a sneak preview of the company’s upcoming shows this year.

Aureus has been the artistic producer of CBT since 2013. He was born in the Philippines and moved to Canada with his family when he was five years old.

Aureus’ grandfather Leon Sa. Aureus founded and published the newspaper Bicol Mail. It was forced to shut down during Martial Law after a number of its reporters were imprisoned by the Marcos regime.

“CBT wants to continue to build a community of Filipino Canadian theater artists, audiences and supporters,” he says.

“We also want to convince Canadian arts funders that the Fil-Can community merits support because we are one of the fastest growing and already one of the largest ethnic communities in Canada. We represent a significant part of current and future Canadian society.”

CBT has other projects lined up for the year.

Aureus is working with young Fil-Can artists in devising a script as a group. “It’s a collective creation project that explores identity, sexuality and growing up in the Internet age, alongside the dynamics between newly arrived Filipino Canadians and those who grew up or were born in Canada,” he says.

“Tales From the Flipside,” a showcase of new plays, will start development in May and culminate with a show in August.

“The series is called ‘Tagsibol,’ which means spring in Tagalog, to foster renewal and rebirth,” he says.

“These artist-incubator workshops will offer Fil-Can participants the opportunity to learn specific skills. They also serve as a starting point in building the CBT artist network where possible ensembles and future projects can begin.”

CBT is working with community partners to develop workshops that include puppetry and indigenous culture/performance.