Asian nurses in LA illegally fired for union drive—labor board 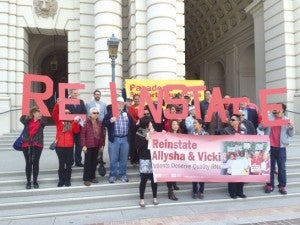 The nurses, Allysha Almada and Vicki Lin, were joined by city officials and community leaders to applaud the labor board’s decision at a press conference on Thursday, February 4.

“The first emotion I felt hearing about the NLRB ruling was a state of shock and then it easily turned into elation,” Almada, a 28-year-old Filipino American nurse told the Asian Journal.

“It’s an, us versus them, David versus Goliath, kind of situation,” she added. “Here we are, we’re going up against a large community hospital that has millions of dollars to essentially spend fighting us when that money should be going to patient care. We’ve seen them direct money and funds from patients into fighting organizing efforts. This definitely feels that yes, we were in the right.”

Almada and Lin, both of whom were working in the intensive care unit, were terminated in August of last year, after spearheading a union organizing drive under the California Nurses Association/National Nurses United (CNA/NNU) and publicly speaking about deteriorating conditions (i.e. short staffing and inadequate supplies) at the hospital.

Registered nurses at the hospital began organizing with CNA/NNU in May 2014, but many voted against representation the following year after they were allegedly intimidated by hospital officials.

“When this [firing] first happened, I felt very hopeless. I was very scared and I didn’t know what to do,” Lin said.

The union filed an unfair labor practice charge with the NLRB challenging the dismissal last year, which the labor board responded to on Friday, Jan. 29 by siding with the nurses.

Lin added, “What happened to me can happen to anyone and that’s why we need union representation to protect our rights along with our patients. Nurses need job protection. We need someone to advocate for us, so we can advocate for our patients.”

In a statement emailed to the Asian Journal, Huntington Hospital’s spokesman Derek Clark said the union’s flyers and statements have been filled “with patently false information.”

Responding to allegations that the nurses were fired for unionizing, the hospital asserted that it was because the pair violated employment policies.

“We stand by our decisions and course of actions – and believe they are in accordance with employment laws, our employment practices and in the best interests of maintaining patient safety and providing the highest quality of patient care,” Clark said, adding that the hospital looks “forward to a resolution in our favor from the NLRB.”

Each week, the union has also gathered signatures from members of the Pasadena community in support of the nurses’ reinstatement, and has attempted to deliver them to the hospital CEO.

“I am grateful and humble that so many people feel strongly about our cause and want to support us that they are willing to sign a petition or willing to come out to our delegation,” Almada said.

Since her firing, the Almada has continued to advocate for nurses’ rights and quality patient care. In October, she attended the White House Summit on Worker Voice, where she briefly met President Barack Obama. She also spoke at a press conference alongside Democratic presidential candidate Bernie Sanders and met with the.

Though Almada is currently working at another hospital in Los Angeles, she is fighting to get her job back at Huntington Hospital.

“It is definitely a point to be made in that…me coming back to the hospital could show nurses — not only at Huntington, but throughout the world — that when we stand together, when we organize [and] when we have a strong collective voice, we can accomplish a lot,” she said.

“I couldn’t believe what they did to these two nurses. They built a case just to instill fear in the nurses and they made [Allysha and Vicki] guinea pigs to show nurses not to vote for the union… I think Huntington leaders should respect the ruling of the NLRB. They did not find any merit on the case,” said Costales. “Delays would only mean a waste of resources.”

She also called on the local Fil-Am community to join in on any rallies and sign petitions on behalf of the nurses.

“Although this unfortunate event happened to us, our victory is so important to show that when you have the backing of thousands of nurses — behind you, standing up for you…[and] your federally protected rights — it is powerful and impactful. Together as a community, together as nurses, we will win this fight. We will win justice and we will make Huntington a better place and a better asset to the city of Pasadena,” Almada said.