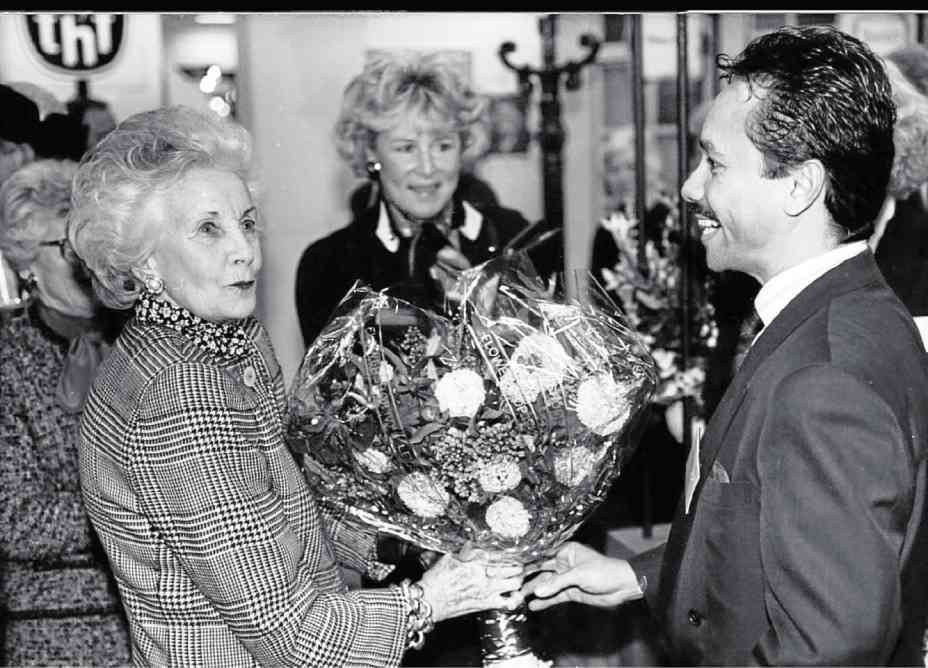 He is a true-blue Ilocano but has a Swedish name.

His name is Joel Magnhem—the only one who has this name “on earth,” he says.

Listen to these: “I socialized with Gianni Versace in South Beach, Florida, and spent some weekends with him. I was among the first notified about his death.

(Versace was a fashion designer who was shot dead by his Filipino friend a few years ago.)

“I hang out with Madonna and dined with her in Balthazar in Soho as well as in her restaurant at Delano Hotel in South Beach, Florida, where I used to stay and which I also held my corporate programs.

“I also hang out with Hugh Grant and Elizabeth Hurley in New York. I never ‘found them,’ they found me,” Joel says.

“And it was through this social life that I enjoyed the “golden key and access” and was able to complement my business incentive (programs) with a colorful social and “ladies program,” which enhanced the corporate MCI (Meetings, Conventions and Incentives) that was my business,” he says.

Joel Boza Hamoy is his Filipino name. But after high school he decided to look for greener pastures for college and chose Sweden.

After finishing school in Ateneo, he got a scholarship and in a few months could speak Swedish.

“I chose Sweden as there was that urge for me to venture to the (quite) unknown. I still enjoy challenges. The Scandinavian Airlines crew based in Manila lived in houses in San Lorenzo Village in Makati where one of my sisters resided and whom I would visit on weekends when I was on weekend leave from Ateneo. So I enjoyed a kind of familiarity with Scandinavia,” he says. 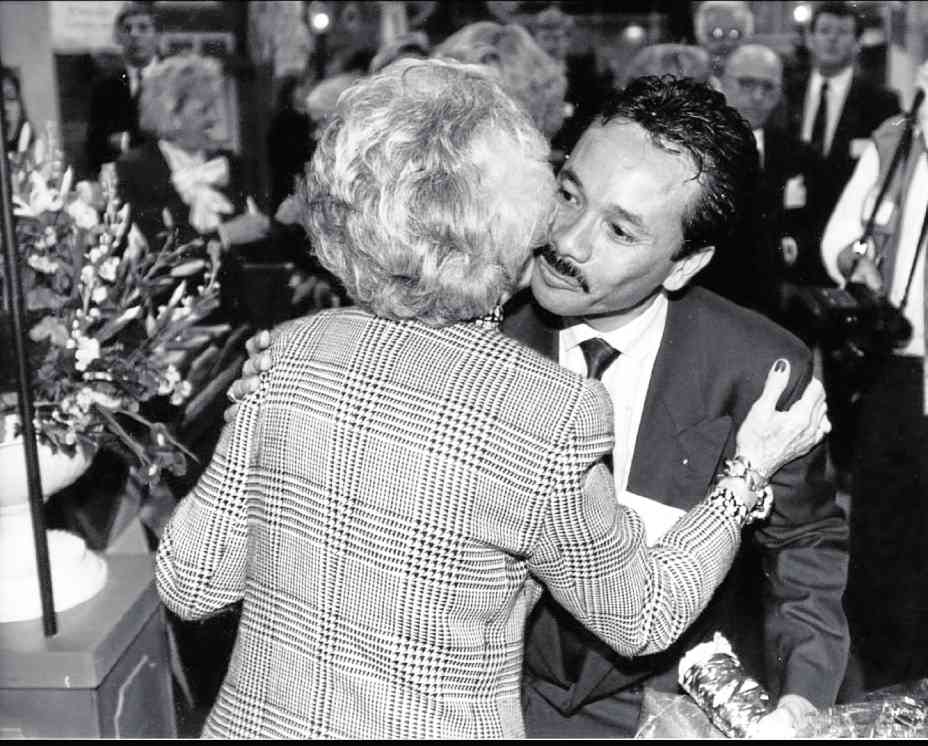 Maghnem breaks protocol and kisses the princess on the cheek.

He took a government study loan and worked part time—full time during the summer holidays to support his university studies.

“It was my introduction to the travel trade as I worked as ground host for Scandinavian Airlines at Stockholm-Arlanda International Airport. Quickly, I was promoted as VIP ground host, meeting VIP’s plane-side and assisting them through immigration and customs.”

Joel had a studio apartment in the upper class area of Stockholm where the who’s who lived.

“My friends from school were sons and daughters of the captains of the trade, diplomats and some nobility. We all lived very near each other and became best friends even beyond our university studies.

“Thus, my introduction to the Swedish Royal Family.”

He became friends with Countess Marianne Bernadotte, wife of the third in succession to the throne of the late Prince Sigvard, who denounced his succession (to the throne) in order to marry a commoner, Marianne. He then carried the title Count Sigvard until his death.

“One of my dearest friends was Her Royal Highness (HRH) Princess Lilian of Sweden, married to the then second in line to the throne, HRH Prince Bertil. Both have passed away.”

Joel was often invited by Swedish royalty and he would often invite them. Thus, the Swedish Royal Court had to give “guidelines to follow for my official and public life.”

Joel says he has been in love “many times.”

“But falling in love and more so, building a family, was not compatible with my work and my passion to produce corporate events in different continents.”

For many years, Joel had a full-time butler, Arthur. He was from the Philippines, first trained by his  family and then “became my perfect butler in Amsterdam.”

“He coordinated with my office on my travels and, if I would entertain in my residence, planned the menu, chose wines and guest seating, ensured that guests ‘come on time’ …  etc. and was always there for me when sometimes things went (privately) sad.

He was my butler and protector. He had contacts with my personal trainer to ensure that I ate very healthy. He too had his challenges keeping up with me and my “whirlwind-kind-of-life.”

When I shuttled between my residences in Amsterdam and in New York, he always traveled  with me. Me in first class and Arthur in business class. The crew always moved him to the last row in first to assist me just before the landings.

“Since I spent less and less time at home due to my corporate and social life, he felt ‘jobless’ and asked to be relieved from his duties. I recommended him for the position of head of housekeeping for the Meyer Family and Coster Diamonds in Amsterdam.” 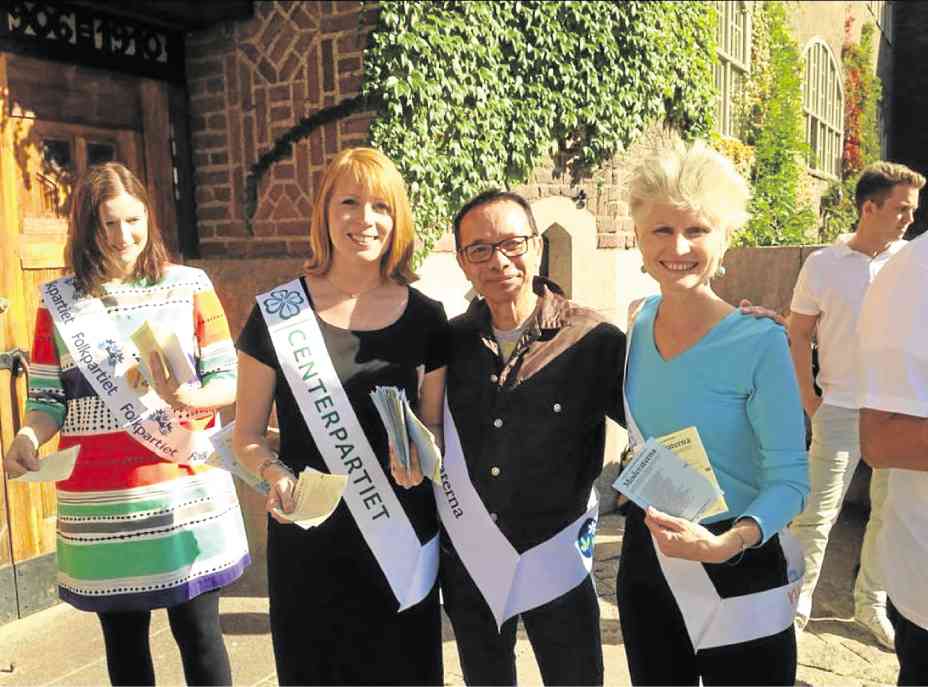 Joel talked about the food he ate and pointed at Arthur.

“I always enjoyed his healthy low-calorie, lots of protein cuisine my personal trainer had instructed him. Aside from that, I entertained outside and had a flair for savoire vivre, and chose the best restaurant any city could offer.

“I used this as well to create the social part of my corporate programs which my clients deeply appreciated. I never had a program with ‘touristy restaurants,’ rather chose the best of the best—fusion cuisine—Dutch, American, Italian, French, Thai, Vietnamese, etc.

“When I produced an incentive for Toyota, with their executive vice president as guest, celebrity chef Nobu Matsuhisa flew to New York from Los Angeles to personally prepare the final dinner that my guests enjoyed in Nobu, New York.”

After his whirlwind life, Joel is now trying out politics, “which was never in my agenda.”

He retired after a car accident in the US. He was disabled for two years.

“I had always voted for the Moderate Party because I felt that I belong to them, living in the upper class area of Stockholm and being an entrepreneur.

“When I finally retired and had time to think of other things than work, I started to flirt with the Christian Democrats whose ideology was based on Christian values. And since we are in an Alliance—four political parties—Moderates, Liberals, Green Center and Christian Democrats, I felt very sure.

“We vary in ideology but we always come up with a common platform during general elections and when our Alliance wins, we govern Sweden in a coalition. We lost the last elections in 2014 and are now in the opposition. We will surely win in the next general elections to be held in 2018.” 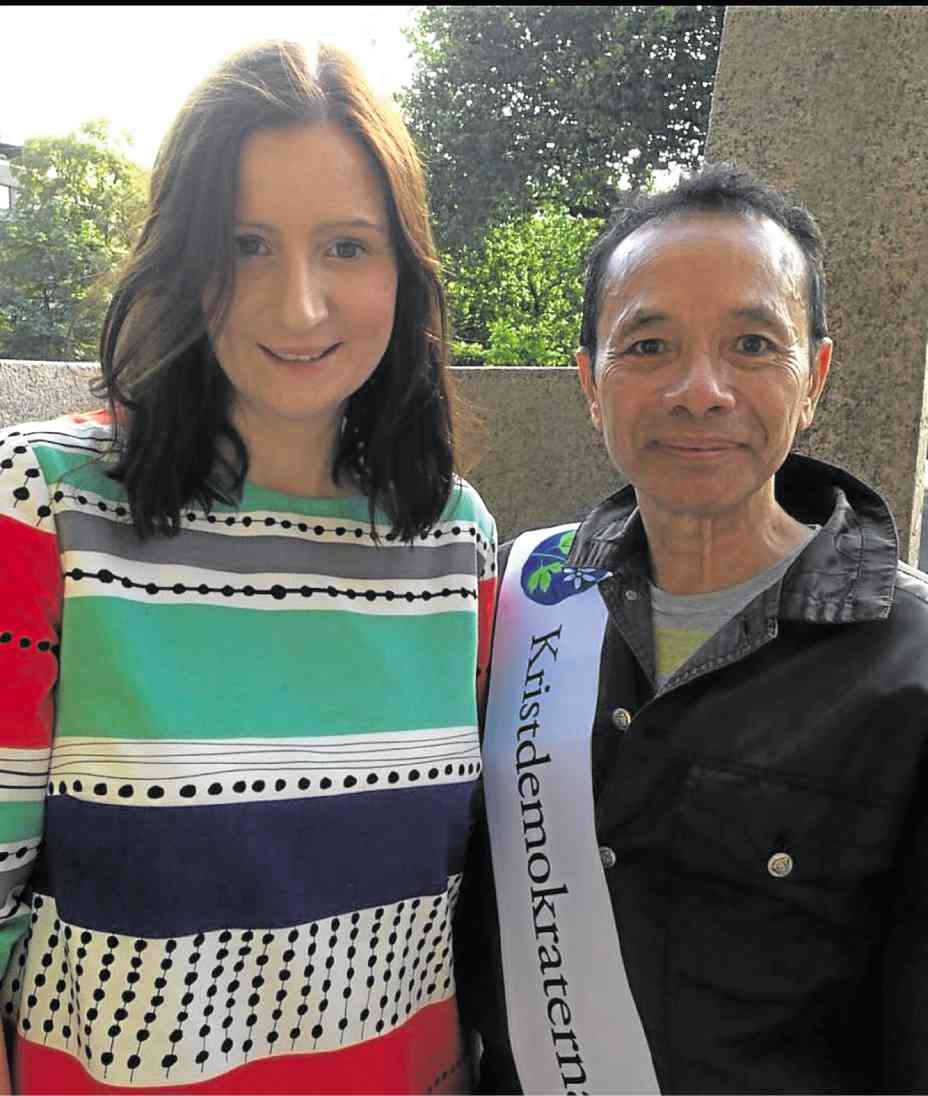 “I started as a regular member of the Christian Democrats and was active during the last European Parliament and the Swedish General Election. Shortly thereafter I became member of the board. Then in October 2015, I was asked to take over the position of district president of my city district of Stockholm Östermalm.

“I declined officially as I felt I lacked experience. So now I hold the title acting vice president. I was asked to be nominated as councilor for my city district November last year and after my hearing, I am now first on the nomination list.

“I had and have a unique and very interesting platform. I have until February to accept both nominations as district president and as councilor. I really need to think and evaluate what I want to do with my life in the future, now that I have reached this part of my (senior) life. Right now, I am perfectly contented and happy. I am hesitatant in making changes.”

Despite  his experiences Joel said he does not read a lot.

“But now, I do get a lot of materials to read from my political party—enhanced Christian ideology to suit modern politics, motions and bills I need to go through and vote in our district meetings.

“Right now, I am reading the autobiography of our former Prime Minister, Fredrik Reinfeldt which I personally received from him, signed and dedicated for Christmas.”

Joel explained Sweden is a constitutional monarchy with the king as head of state.