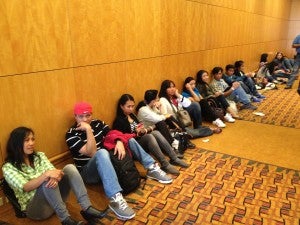 In a photo taken September 22, 2013 during a passport outreach mission conducted by the Vancouver Philippine Consul General in Red Deer, a mixture of those who are awaiting to be called and those who are “chance” applicants, clog up the hallway of a hotel. Passport missions, which require an online registration to grab a slot fill up quickly, forcing other Filipinos to come in case of vacated slots. PHOTOS BY JHONG DE LA CRUZ 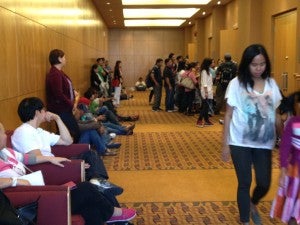 RED DEER, Alberta – After years of pleading, Filipinos in Alberta will finally see a new Philippine Consulate open in the province.

By end-February, the Department of Foreign Affairs will open the new consular office in Calgary to serve the more than 120,000 Filipinos in Alberta province.

DFA Assistant Secretary Julius Torres, who was appointed consul general, will arrive in Calgary on February 23.

Torres said the office will be fully operational by the beginning of March offering services including passport application and renewals, notarials, document authentication, among others.

In a telephone interview, Torres said Calgary was eyed because of the concentration of Filipinos in the area. The city is home to more than 40,000 Filipinos according to the 2011 census. The city was also chosen to bolster relations with commercial establishments, major industries and other diplomatic offices located in the area, he said.

Torres has 35 years in foreign service experience starting in 1981. He is currently serving as the DFA assistant secretary for Middle East and African Affairs, but has previously served several leadership roles in Philippine posts in Jordan, Hawaii, Romania, Brussels, Belgium, Palau, Saipan, Toronto and Australia.

In December, a team from DFA led by Torres visited Calgary to find a location for the new consul office. Centre 10 building on 10th avenue and 4th Street in southwest Calgary is being eyed for office location.

The new consular office will serve Filipinos in the provinces of Alberta and Saskatchewan, easing up workload in consulates in Vancouver and Toronto, respectively, said Torres.

The new consular office will be the fourth Philippine post in Canada. Until recently, government services were being rendered by the Philippine Embassy in Ottawa and the two consulates in Vancouver and Toronto.

For years, Filipinos in Alberta had been utilizing the B.C. consulate office for various services, mainly passport applications and renewals. Because of its distance, Filipinos had to travel, which meant losses in income and money spent on fare and accommodation.

Torres noted that the passport outreach services carried out by the Vancouver consulate in Alberta were not cost-effective. He said that despite the increase in the number of passport missions and a weekend office in B.C., many Filipinos remained eunderserved.

The increase in the Filipino population following an economic boost in 2009 in Alberta that saw the increase in Temporary Foreign Workers from the Philippines, spelled a busier operation and overcapacity at the Vancouver-based consular office.

Calls to open an Alberta-based Philippine consular office renewed in 2013 when Migrante Alberta led a petition signing that gathered 6,000 signatures. 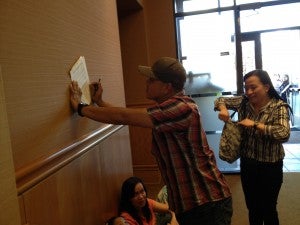 A Filipino immigrant completes a passport application form during a passport mission in Red Deer.

This was followed by the formation of Alberta Coalition for Consular Office in the city of Edmonton composed of private individuals, non-government organizations and Filipino cultural groups.

In March 2014, Consul General Neil Frank Ferrer met with members of the coalition and Filipino community in Calgary for consultation. In the meeting, he indicated a consular office would be set up in Calgary by 2015 if a budget approval passed in the Lower House of Congress during the annual budget deliberation for that year.

House Bill 4971 sponsored by Gabriela Partylist in September 2014 supported the call for the opening of the consular office in Alberta citing that a majority of the Filipinos living in the province were women working under the Live-in Caregiver Program.

Clarizze Truscotte, Coalition for Consular Office member said in an interview that although her group lauds the fruition of their campaign, she is hoping that the move is not geared towards gathering votes for the administration’s party in the upcoming election.

“We are glad the Philippine government is finally paying attention to our needs here but we hope this is not to garner votes from Filipino migrants,” she said. Truscotte said that her group would keep a close watch on the progress of the new consular office.

Torres said the new consular office’s role in the election would be to account for all the votes under its jurisdiction and submit the numbers to the Vancouver consulate.