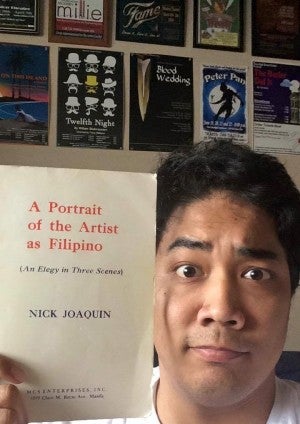 Timothy Cabal with a copy of “Portrait of the Artist as Filipino” published in the 1960s. CONTRIBUTED PHOTOS

OCEANSIDE, California–Timothy Cabal is busy rehearsing for this year’s Kennedy Center American College Theater Festival, because he is competing at the regional level at University of Hawaii from February 11 to 14 for a chance to attend the national festival in April.

This 24-year old theater major at MiraCosta College was nominated for the National Irene Ryan Acting Scholarship for his role as Aldolpho in his school’s production of “The Drowsy Chaperone.”

Cabal had been nominated twice before for the scholarship. Third time might be the charm this year.

“I am extremely grateful for the many opportunities that my school has given me to excel in theater,” he says. “Tracy Williams, one of my instructors, has been a great influence on me, as well as Lisa Berger and Andrew Layton.” 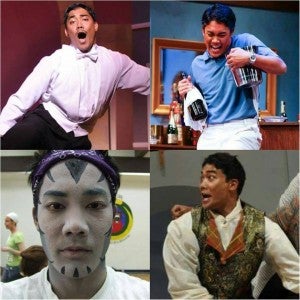 Cabal has been acting since high school

Cabal got interested in theater when the 2004 movie version of the musical “The Phantom of the Opera” came out.

“That was my favorite show for a long time,” he says. “A family friend was involved in community theater and I tried it out myself.”

He’s been acting ever since at school and community theater productions. Last year, he debuted professionally as Paul Bratter in Oceanside Theatre Company’s production of “Barefoot in the Park.”

He has previously won National Youth Theatre Awards for Outstanding Support Actor as Schlomo Metzembaum in “Fame” for Fallbrook Players in 2010 and Outstanding Lead Actor as Ichabod Crane in “The Legend of Sleepy Hollow” for Encore Youth Theatre in 2009.

“I’m a competitive person but it’s not about the competition. I’ve learned that you’ve got to make friends with what most people call ‘failure’ to become better at what you wish to pursue.

“It’s about the art and craft. I’m an open book hoping to learn and expand my knowledge of acting. I definitely learn a lot about the craft of acting from everyone who goes to festival. ”

Born and raised in San Diego, his mother and paternal grandfather hail from the Philippines.

“This year, I want to represent my culture a lot better,” Cabal says.

He plans on performing a monologue from Nick Joaquin’s “A Portrait of the Artist as Filipino.” Joaquin is a Philippine National Artist for Literature.

“I researched on Filipino plays because I wanted to learn about the dramatic arts in the Philippines, if there was anything out there.”

He discovered Joaquin’s play and ordered a copy from Amazon.com. He’s already chosen which part of the play he’ll be performing at the competition and even sought out the Joaquin estate to ask permission.