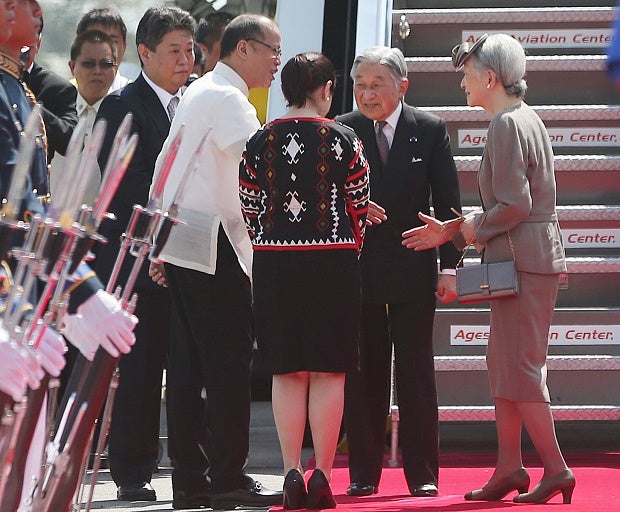 Japanese Emperor Akihito and his wife, Empress Michiko, left for home at noon yesterday, ending a five-day state visit to the Philippines that shone a light on the bitter lessons of World War II.

The imperial couple, who first visited the Philippines more than 50 years ago as crown prince and princess, walked side by side with the Aquino siblings, making a series of ceremonial bows before entering their aircraft.

At a final press briefing on the state visit late Friday, the emperor’s press secretary Hatsuhisa Takashima said the royal couple enjoyed  the hospitality of the Filipinos, particularly the President and his sister.

“They are relieved that the trip was successfully conducted and it has come to an end and they can go home,” he said.

Takashima said the memories of the war as they go back to Tokyo will be even “stronger.”

Akihito, the son of Emperor Hirohito in whose name Japan had waged war on the Philippines and other Asian countries 70 years ago, led memorial services for those killed during World War II on separate occasions in Manila and Laguna.

One of the highlights of the trip was a visit to Cavinti, Laguna, to an 11-hectare memorial park built to remember the Japanese war dead.

The Philippines, which was invaded and occupied by Japan from 1942 to 1945, is believed to have the most number of Japanese casualties outside Japan during the war.

Takashima said the couple recalled feeling “nervous” before visiting the Philippines back in 1962 because of the reported anti-Japanese sentiment among Filipinos barely two decades after the war.

The feeling vanished, however, as they were warmly welcomed by then President Diosdado Macapagal and his wife, he said.

Takashima said the main purpose of the trip was to keep the memory of the war alive, apart from celebrating the 60th anniversary of the reestablishment of diplomatic ties between the Philippines and Japan.

“The message would be stronger than ever. They will keep saying this to the Japanese when they go home. War should not occur again,” he said.

The emperor, however, did not issue any public statement expressing remorse or apology for the atrocities committed by the invading Japanese during the war.

Businessman Philip Sanvictores, president of the Philippine Federation of Japan Alumni Inc., an organization of 15,000 former students and graduates of Japanese universities, said Filipinos, instead of looking at the past, are more forward-looking when dealing with the Japanese.

“We are optimistic the visit will make our strategic partnership with Japan even stronger,” he said.

“Our parents and grandparents experienced suffering during the war years. They have the impression that the Japanese were aggressors. But now, we live in a happy time. They are now our partners,” Zuniega said.

Since the war ended, the relationship between the Philippines and Japan has dramatically improved.

Japan has been a strategic ally of the Philippines since 2011, a partnership enabling the two to enhance their defense ties in the face of China’s aggressive activities in the South China Sea.