Presented by East West Players (EWP), the play is about three of the most sought-after professional funeral criers in Monterey Park. They are eager to welcome Aurora’s 14-year-old daughter, Ligaya, from the Philippines into their somber trade.

However, they soon realize that she has the opposite effect on people, making them laugh instead of cry. As the play unfolds, it will tackle cultural identity, generational conflict and finding home in a new country.

Giovanni Ortega is the playwright. EWP approached Ortega in the summer of 2014 and asked him to submit different treatments for a play that dealt with the topic of people crying at funerals.

Ortega says he did not watch the 2003 movie “Crying Ladies,” starring Sharon Cuneta, which also features Filipina funeral criers, so as not to influence his writing for this play.

“But I understand the film is set in Manila and ours is set here in Los Angeles,” he says.

Instead, he researched the practice of professional mourners. He interviewed people and read up on the Chinese tradition of hiring criers for wakes and funerals.

“I’ve also discovered that crying at funerals is a tradition found in other cultures as well. There are Irish wailers and Sardinian mourners. Some Middle Eastern cultures practice it, too.” 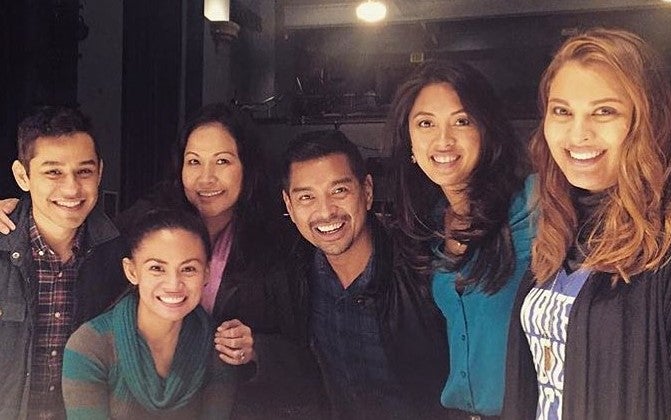 Born in Quezon City, Ortega moved to Chicago with his family when he was 12 years old. “I’ve always been interested in performance and writing. I was hooked when I did my first musical ‘The Wiz,’ in 8th grade.”

Ortega, currently artistic director of Mezçlao Productions, has been involved with EWP since 2005 when he was cast as Ferdinand Marcos in “Imelda, The Musical.”

He has directed staged readings for EWP’s David Henry Hwang Writer’s Institute, choreographed for “Tea, With Music” and was commissioned to write the play “Allos: The Story of Carlos Bulosan.”

His playwriting routine is to write in the wee hours of the morning. “I write as early as 4 a.m. and the best place for me to write is somewhere where there’s no distraction or sound,” he says.

He then works with the cast and director to tweak his script. “I’m currently editing, trimming and doing re-writes during the rehearsal process. It’s no longer my play once the director and the actors enter the process, it becomes ours.”

“It’s important that a playwright is willing to collaborate with others so that the power of the words are more impactful to society.”

Tickets to opening night on February 17 includes a 7 p.m. pre-show cocktail reception and a post-show reception with the cast and creative team.