Mexico’s la China Poblana may have been a Filipina 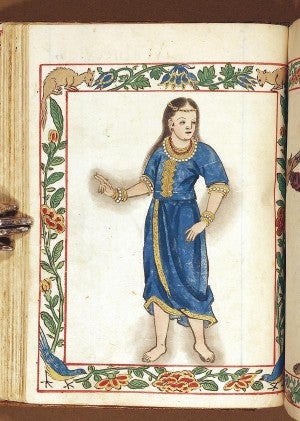 NEW YORK CITY—(Continued) The Mercado was a mere six blocks north from the cathedral and the heavily touristed zocalo but, except for us, foreign visitors didn’t seem to be much in evidence. Spanish speakers don’t use “palengke” to mean “market,” as we do in the Philippines. Were a Filipino to mention the word to Mexicans the latter would think of Palenque, the site of a vast and ancient Mayan temple complex in the state of Chiapas. One wonders how our peculiar use of it came to be, for the Spanish means “wooden stake fence.” A palisade, in short. Did fences surround our markets in precolonial days?

We walked in and around the market on a mission: to locate works by the Japanese American artist Isamu Noguchi and Marion Greenwood, his paramour at that time, in the mid-1930s, works unremarked on by the Lonely Planet guidebook but that a friend of my wife, Midori, had alerted her to. We did locate them on the dimly lit second floor, with no one about. Greenwood’s Social Realist murals covered the ceiling above the stairway and the wall at one end of the floor, while Noguchi’s work, a wall relief with an anti-Nazi theme occupied one corner. The Noguchi was a disappointment while Greenwood’s murals were vibrant, in their depiction of workers and peasants working together to thwart capitalist exploiters, echoing the great Mexican muralists.

There were other murals as well by other artist or artists (in the gloom, we couldn’t discern any signatures and no one of the vendors we asked knew who the creator or creators were), again with scenes of workers and peasants united in their class struggle. Just underneath them sat or sprawled a few living, breathing homeless individuals, mirroring the murals and the murals mirroring them.

In the nearby 16th-century city of Puebla de Los Angeles (its full name, though most people simply refer to the city as Puebla), as in Distrito Federal, we went everywhere by foot, easier to do since Puebla is so much smaller than Mexico City.

Aside from sampling the different moles Puebla has to offer—this is where this chocolate-based sauce reigns supreme—we were very much the non-accidental tourists and explored several neighborhoods and crafts markets, as well as those churches, of the vast number whose steeples one could see everywhere, that piqued our curiosity. One that I was keen to visit was La Iglesia de la Compania, an 18th-century Jesuit church, a stone’s throw from our hotel.

There, in a crypt beneath the main altar, a 17th-century religious recluse by the name of Catarina de San Juan is interred. Also referred to as La China Poblana, she was supposed to have been a Hindu princess by the name of Mirra who had been brought over by a Spanish captain from Manila, presumably on one of the galleons that plied the Manila-Acapulco trade route. Reportedly bought at a slave market in Manila, the girl was presented as a gift to a wealthy childless couple, members of Puebla’s haute bourgeoisie.

The story goes that she was an illiterate, was christened Catarina, and brought up by the couple, to whom Catarina was devoted. On the couple’s demise, Catarina entered a convent and her intense practice of Catholicism made her stand out. She was believed by Poblanos to be a prophetess, and so they turned to her as they would to an oracle. At her death, she was widely regarded as a saint, with her body laid to rest in the church.

We walked over one morning to see if we could perhaps visit her crypt. Unfortunately this was off limits, according to the church official we asked. But he confirmed that indeed Catarina de San Juan lay underneath the main altar.

In its section on Puebla, Lonely Planet states that La China Poblana “was supposedly responsible for the colorful china poblana costume—a shawl, frilled blouse, embroidered skirt, and gold and silver ornaments. This costume became a kind of peasant chic in the 19th century. But china also meant ‘maidservant,’ and the style may have evolved from Spanish peasant costumes.”

The equation between “China” and “maidservant” immediately brought to mind that between “Filipinos” and “servants” in Europe. And the label “China” also points to the widespread practice in Latin America of labeling almost anyone from Asia as “Chinese.” Peruvians, for example, call their disgraced former president, Alberto Fujimori, “El Chino” or the Chinaman, even though Fujimori is ethnically Japanese. (Incidentally, when we were in Lima many years ago, my wife who is Japanese—born and bred in Yokohama—was referred to as “China.” Clearly, a bit of Orientalist nomenclature.)

But if Catarina were a Hindu princess why then this misleading label? Why not “La India”? And how did a Hindu princess wind up in a Manila slave market? This didn’t ring true. Manila was never known to have slave markets. Certainly there were slaves in precolonial island society, but this had to do more with clan obligations and debt servitude. It never became a commercial enterprise. At any rate, with Spanish colonial rule, slavery was proscribed. It is possible that the woman in question was purchased in Malacca (where Magellan had bought his alipin, or slave, Enrique, in the early part of the 16th century), and then brought over to Manila, before the voyage across to Acapulco.

The China Poblana costume, described earlier, sounds suspiciously close to the female attire seen in images from the Boxer Codex, one of which is reproduced here. (The Codex is a manuscript in Spanish, circa 1590, bought in 1947 by Professor Charles Ralph Boxer, after whom the document is named, and now in the possession of the Lilly Library at Indiana University.) It shows an upper-class Tagalog maiden in native dress bedecked with ornaments that dovetail with the description of the China Poblana costume—and that one can see indigenous Mexican women still wearing. (The peasant-style dresses that Frida Kahlo favored could very well be described as China Poblana.)

It is quite possible then, and even probable, that the historical personage who came to be known as La China Poblana a/k/a Catarina de San Juan, was neither Hindu nor Chinese but was in fact a girl from Manila wise enough to make of her solitude her salvation.