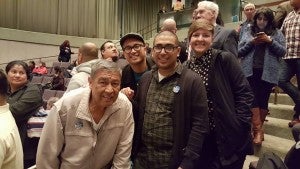 LONG BEACH, California—Before sunset and into the early hours of January 20 the council of the City of Long Beach, backed by community advocates, voted to gradually raise its minimum wage to $15 by 2021. This follows a July 2015 Los Angeles County Board of Supervisors vote for an increase to $15 in four years.

Long Beach is the second most populated city in Los Angeles County with a 2014 estimate at 473,577. Nearly 13 percent of residents are of Asian American descent, and over 20 percent are living below poverty level.

Filipino Americans were at the forefront of increasing the City of Long Beach minimum wage.

“We know working families are struggling right now. We were pushing for $15 as soon as possible. This victory is a critical step forward to addressing low wages in Long Beach, but we know strong wage enforcement is necessary,” stated community activist Nikole Cababa.

In a City where the average rent of a 1-bedroom apartment is more than $1,000 per month, the passage will gradually improve the welfare minimum-wage worker population.

Cababa added, “More of our youth are helping supplement the incomes of their families dealing with the high costs of housing, education, healthcare and transportation.”

“I support that it passed. I’m only concerned that once the minimum wage starts increasing, the prices in stores and various business will also increase,” states retired Long Beach resident, Oscar Dela Cruz.

“This is for everyone’s concern and is important for all sectors of this community. Everyone wants to benefit and many are going through financial hardship,” stated Long Beach Port worker Daniel Linares.

According to the survey, 96 percent of residents supported raising the minimum wage. One hundred percent supported the City of Long Beach passing a policy to address wage theft, and at least 41 percent have experienced at least one form of wage theft. The survey was presented to various Long Beach council members.

Advocates expressed the need to continue working with the City Council of Long Beach to address wage theft and hold employers accountable for any labor law violations.

“We also spearheaded the creation of the Coalition to End Wage Theft in Long Beach in partnership with several community organization, non-profits, churches, student clubs, and worker center,” said Concepcion.

The Filipino Migrant Center plans to continue offering Filipino workers support in filing wage claims and providing them with educational resources to understand their rights in the workplace regardless of their immigration status.