Do you know who Magdalena Estoista Leones is?

She was the only Filipina veteran of World War II awarded the Silver Star in 1945.

I learned about her in San Francisco when I attended the re-opening of the Filipino Veterans section in the Veterans Building in the San Francisco Civic Center. 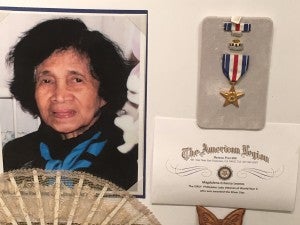 Magdalena Estoista Leones was the only Filipina veteran to be awarded the U.S. Silver Star medal in World War II. PHOTO BY EMIL GUILLERMO

Rudy Asercion, the intrepid community activist, veterans’ advocate and keeper of the archives at the Veterans building was there.

But as he cleaned up after the opening reception last Saturday, there was a sense of disappointment about the turnout.

“In 2004 this place would have been packed,” he said to me in a rare unguarded moment.

Just a handful, maybe 50 or so people, were at the ceremonial re-opening of the Filipino Veterans Education Center.

Maybe it was the long three-day weekend. Maybe it was the threat of rain. More than likely it could be the sense that the Filipino veterans have already won their battle.

When the vets were ignored by the government, there was heat in the community. “Equity” was the battle cry, and the Filipino vets had replaced Ferdinand Marcos as a hot button and galvanizing force in the American Filipino community.

What better rallying point but for the moral high ground represented by the Filipino Veterans, sent to war, promised pay, benefits and citizenship, only to have the promise rescinded by the U.S.?

And to have it all paced by a metronome of death that marked the passing of each veteran who died without being made whole.

Veterans got $15,000 if they lived in the U.S.; $9,000, if they still lived in the Philippines. It was a one-time lump sum benefit for all those who could prove their service.

But who knew there would be one more hill to climb.

Of the more than 250,000 Filipinos who served, only 18,000 have been officially recognized and deemed eligible for the lump sum payments.

The majority didn’t make it. They are dead.

But there are about 4,000 still appealing for a variety of reasons, mostly over bureaucratic snafus and lost documents.

They still have some life.

Like the goal line stand trying to push a hurtling fullback over a wall of bodies to score the winning touchdown, there’s a chance. But it doesn’t look good for most of the 4,000.

It certainly isn’t going to happen if the community and politicians think the job is done.

Ready for a final push?

If it’s going to happen, it will depend on how informed the public is, which is the reason why Asercion is hoping the new veterans education center would attract a new generation of American Filipinos who don’t know about the vets or the role Filipinos played in the so-called Pacific theatre of World War II.

“This is the only place for videos, audio recordings, artifacts, transcripts written accounts of what they did in the war, 1934 up to 2014 when all the claims were evaluated and denied,” Asercion said. “We have that in the research facility. But our main goal is to have it up on the Internet so people can do research on their Lolos and they can say, ‘ Oh the government, they screwed us.’ That could be good.”

Yeah, that could be good.

And let’s not forget the lolas, like Magdalena Leones.

You’ll see her Silver Star on display at the center.

But will all this be enough to once again galvanize a community to urge politicians to make a final push for the 4,000 still marching for a resolution?

Or is it too late?

Emil Guillermo is the author of “Amok: Essays from an Asian American Perspective,” which won an American Book Award. A journalist and commentator, he writes from Northern California. Contact: www.amok.com;