‘MANILA: Beyond the Envelope’ art show opens in San Francisco 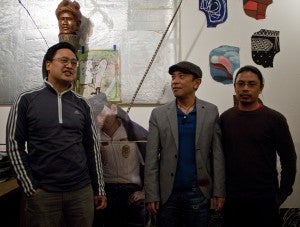 SAN FRANCISCO—A group art show that evokes and reflects Manila “as a postcolonial city that is a constantly evolving contradiction of contradictions” recently opened here.

It will be shown at the Office Gallery, Kearny Street Workshop, 1246 Folsom Street, Suite 100 in San Francisco.

An excerpt from the exhibition statement declares: “For those of us who have walked her streets, who grew up listening to her tales of tragedy and woe, who breathed in the smog and stench day after day, who have danced to her pulsating beat, we feel her bones, in the follicles of our hair, in the remnants in our guts, in the depths of our souls, like the indelible stain of mortal sin. Simply no place like Manila.” 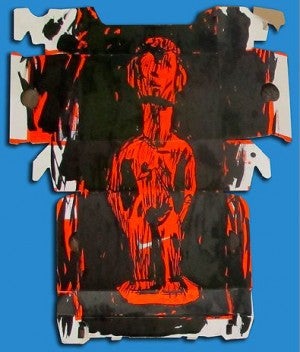 At a recent lecture at the Asian Art Museum here, Manuel Ocampo stated that his art is a mess because Manila, where he currently lives, with its incessant gridlock of people and traffic, is a mess.

At first glance, the works that make up the exhibit seem to be arbitrary, randomly curated and arranged within a small space–an-office cum-gallery–but a longer and deeper look reveals the intentional organized chaos the exhibit embodies as a reflection of the place and psyche that is Manila.

A native of Olongapo, a highly urbanized city in the province of Zambales, and former location of the U.S. Naval base in Subic Bay, Marcius Noceda was 15 when he was forced to live in the U.S. For various reasons, he felt it was to his disadvantage that he was a Filipino immigrant. It was in art that he realized his value as a Filipino for he was “born with a rich culture and an interesting history in art/art making,” which became the basis of his art and his life. 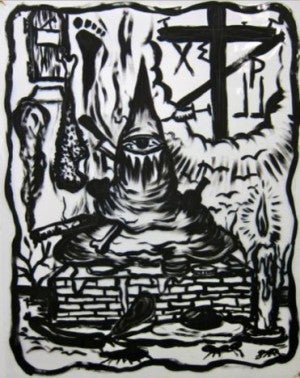 “My intention in my art is to create conversation between the viewers and the painting, for them to experience some sort of emotion and create their own story. I want the viewers to work their imagination through my paintings. I want my paintings to speak for themselves,” Noceda said.

In his works, Quezon City native Mel Vera Cruz includes Filipino icons “not only to honor my past but to give pride to my people who lost theirs. It also serves as homage to all the ancestors who came before us because Filipinos have the same fate as the Native Americans and all other indigenous people.”

Vera Cruz added, “Besides being instantly recognizable to us, these icons serve as a way for me to present myself not only with pride but with originality and attitude. It’s like unloading stuff inside my bayong that was taken for granted for so long. It is also a marriage between the past, present, and the future because it represents my past shown according to my perspective to open up doors for the future.”

He said his main intention in making art is “to heal myself and the collective.” It was through digging deeper into his self that he was able to see through the blinders imposed by colonization that is the cause of most of the dilemmas of Philippine society in particular, and that his art “serves as a beacon for people in distress, lost, confused, and in the dark.”

The awakening to his art’s intent can be traced back to Vera Cruz’s education in the Philippines: “Western art was taught to me in college by Filipino art teachers who studied in Europe and the U.S. There wasn’t even a discussion about Amorsolo or Botong Francisco. Why wouldn’t anyone want to talk about them when their styles are ‘European?’ It was all foggy, contradicting and confusing… a denial of our own culture. It felt like you’re forced to speak English even if it’s uncomfortable, or else you’ll be labeled inferior.”

Having immigrated to the San Francisco Bay Area at age 10, Quezon City native Carlo Ricafort attributes the significant change in his cultural background to the rich multicultural influences of the Bay Area that is also home to one of the largest Filipino-American communities in the U.S.

His family left Manila in 1985 at the height of the People Power Revolution. Thirteen years later he returned and “immediately felt the density of Manila, extreme poverty, hyper capitalization evidenced by gigantic malls and billboards.  As a young adult, I didn’t know how to process this and yet I was drawn to the dynamism of the megalopolis.” 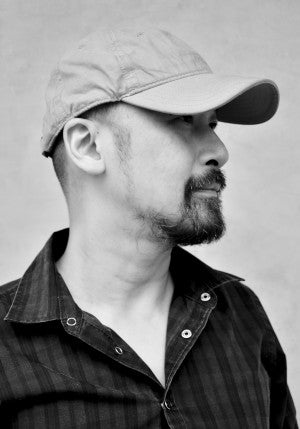 Ricafort’s work tends to be abstract and non-linear. What he is trying to convey may “sometimes be unclear to the viewer.” He said, “My art deals with exile, and similar to Blues music, it’s a personal language and may not necessarily have a narrative or cultural signifiers.”

Noceda laments that Manila “is still the same hell when I was there until now… the art scene is the only thing that’s promising to me.” According to Ricafort, Filipino art is as varied as the artists making them.

Manuel Ocampo said that he finds it hard to comment on the state of Filipino art “because the term ‘Filipino art’ does not interest me. I am an artist who lives in Manila but I am most active in Europe. When I am showing, my viewers there are not aware that I am Filipino. To me it doesn’t matter whether they see it as Filipino art or not as long as the work communicates to them. One thing is that having to identify oneself as a Filipino artist is very limiting. Sometimes artists of Filipino descent exploit this and sometimes they self-exoticize themselves through this.

“Should I be conscious of what I am doing as Filipino or not? Aesthetically my work is closest to being German if we are talking about ‘looks’ and unsurprisingly that is the region in Europe where I am most active. I have curated shows at home and abroad involving artists active in Manila. The artists I chose may not necessarily be Filipinos, some come from Australia or Germany. It is important to me that they participate and have made contributions in the local art scene. So I try to exploit that the art I curate comes from a certain region but I do not wish to designate it as ‘Filipino art’.

“I think artists should just make art. There are no criteria unless you want to package yourself a certain way. I don’t have any thoughts on Filipino art because, in my opinion, and this is a philosophical argument, there isn’t any.”

On the other hand, Ocampo offers a way of pushing art in the Philippines beyond the current envelope: by destroying the dictates of auction houses and to get the Philippine government to recognize and regulate the 5 percent resale royalty rights of Filipino artists.

“Imagine a work that a friend made in 2014 was shown in an art fair in Hong Kong in March 2015, and then was auctioned off in Manila in September of the same year, and the buyer who put it up for auction tripled his investment. The artist didn’t get a single cent. The problem is that the buyers think that they are doing artists a favor by buying their art pieces. There is no respect for artists there. That is why the artists don’t have dignity and Philippine culture has no integrity. I also want to point out that we are one of the few countries that has droite de suite law, and we should put it into effect. This will empower artists, move our culture forward and make speculators respect what artists are doing.”

MANILA: Beyond the Envelope is on exhibit until March 10, 2016 at the Office Gallery, Kearny Street Workshop, 1246 Folsom Street, Suite 100 in San Francisco.