Hagedorn’s ‘Dogeaters’ to open in San Francisco in February 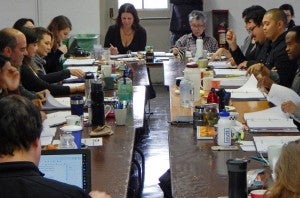 SAN FRANCISCO – Jessica Hagedorn’s “Dogeaters,” adapted by the writer from her own novel of the same title, will premiere here next month.

The play, which explores the Philippines through the eyes of a balikbayan, Rio Gonzaga, as the Marcos regime unravels, will be staged by Magic Theatre starting February 3 at Fort Mason Center for Arts and Culture.

It’s a world filled with “drag queens, beauty queens and movie stars alongside statesmen, activists and rebels” – characters that will be fleshed out by a 15-member cast, a majority of whom are Filipino Americans, with some playing double and even triple roles.

Ogie Zulueta first worked on the play in its very first workshop in 1997 while Rinabeth Apostol will be performing the material for the first time.

Both actors will be playing Filipino characters on stage once again after their turns (with fellow “Dogeaters” cast member Jomar Tagatac) last year in American Conservatory Theater’s “Monstress,” a twin bill of one-act plays based on Filipino American writer Lesley Tenorio’s short stories.

“In the 1997 workshop, I was asked to read for the role of Joey Sands, a street-wise hustler with an American G.I. father and Filipino mother. And luckily, I was hired,” says Zulueta, who was born in Manila and moved to San Francisco with his family when he was two years old.

For this 2016 production, he will be playing other roles. “It makes sense for me to mature into the older characters,” he says, laughing.

“My approach to this project will be the same as I approach any other play. I treat it as a new play and try and rediscover the material with the talent in the room, that way my approach stays fresh and immediate.

He appreciates that the playwright is involved in rehearsals: “Jessica plans to re-sculpt the play to make the stories deeper and richer. We get more detailed perspectives from her about the scenes and character backgrounds that inform our acting.”

To prepare for her role as Rio, Apostol has been researching the Martial Law years by interviewing her parents, both of whom were activists in the ‘80s. 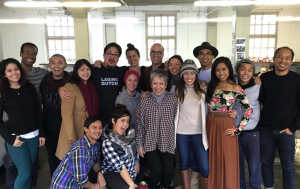 Born in San Francisco, Apostol is also mining her own perspectives as a balikbayan: “I use a lot of personal experiences from when I visited the Philippines; I find I can relate a lot to what the character of Rio observes.”

“We also have the luxury of having a great dramaturgy team who’ve shared a wealth of resources for the entire cast. Knowing the political history of the Philippines is particularly helpful.

“I’m feeling pretty euphoric about it all. ‘Dogeaters’ has never been produced in the Bay Area and it means so much to so many people. Almost everyone I know, from the theater, the academe or Filipino communities, is excited about the production for so many different reasons.”

Both actors say they admire Hagedorn’s novel. “I was blown away by the storytelling, language and power of the novel, especially that it’s an acclaimed novel about the Philippines,” says Zulueta.

Apostol says, “I’m a huge fan. I was so eager to revisit the book again, to provide insight and be reminded of details that aren’t necessarily written into the play version.”

Hagedorn relocated to the U.S. from the Philippines in her early teens. Aside from Dogeaters, her novels include Toxicology, Dream Jungle, and The Gangster of Love. She edited Manila Noir, a short story anthology.

Hagedorn’s playwriting credits include “Stairway to Heaven” and “Fe in the Desert” for Intersection for the Arts and Campo Santo theater company.

She wrote the book for the musical “Most Wanted,” for La Jolla Playhouse, loosely inspired by the life and crimes of Andrew Cunanan, the Fil-Am who killed fashion designer Gianni Versace.

“Dogeaters” premiered in 1998 at La Jolla Playhouse in San Diego and has been staged in New York and Los Angeles. In 2007, it was staged in Manila by Atlantis Productions (now Atlantis Theatrical Entertainment Group).