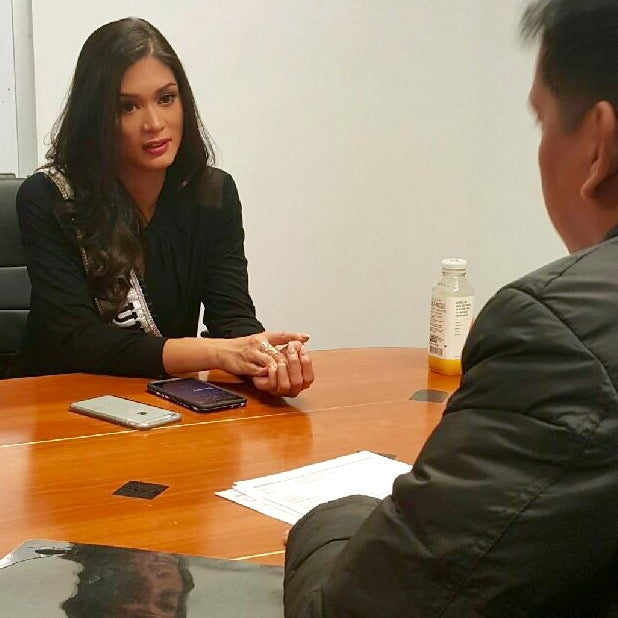 “They tried to calm me down and told me to relax because I overdo everything, I overanalyze, I overwork, that’s how serious I am. I was living and breathing Miss Universe,” tells INQUIRER.net U.S. Bureau correspondent Elton Lugay in New York. PHOTOS BY ELTON LUGAY

NEW YORK CITY—She may have looked a bit tired at times, but Miss Universe Pia Alonzo Wurtzbach never failed to convey her message: substance and sincerity in caring for others mark the true beauty queen.

In a recent one-on-one, the German-born Filipino actress exuded the passion that backed her quest to bring home the Miss Universe crown to the Philippines after 42 years. She lived and breathed Miss Universe for four years, and “everything paid off” during her chaotic win in Las Vegas last month.

“You can be blessed with a beautiful face, a beautiful body and have the confidence to match, but then what?” the 26-year-old, who confessed that she’s loving the arctic weather in New York, told INQUIRER.net in an exclusive interview January 13 at the Miss Universe headquarters in midtown Manhattan.

“There are many girls who are like that. But what about the substance—do you care about other people?” she said. “Because in Miss Universe, you have to be a spokesperson and you’re the image of the brand, what the organization is all about. You can’t fake that for a year! That’s exhausting.”

Apart from her known advocacies, Wurtzbach promised to work throughout her reign to inspire everybody to go for their dreams.

“[Let us] unite even if we don’t come from the same background. Maybe you’re not from the same country, maybe you don’t have the same religion. [Let us] embrace diversity. Let’s be selfless with our goals—because if you’re only thinking about yourself, you’re not going to have anybody to share your success with,” she said.

‘Magical’ is the word she picked when asked to describe her long pageant journey. “It was like magic, more than I expected actually.” But it took great patience and sacrifice. Perhaps the most serious contestant in the pageant, Wurtzbach wasted no time trying to win. 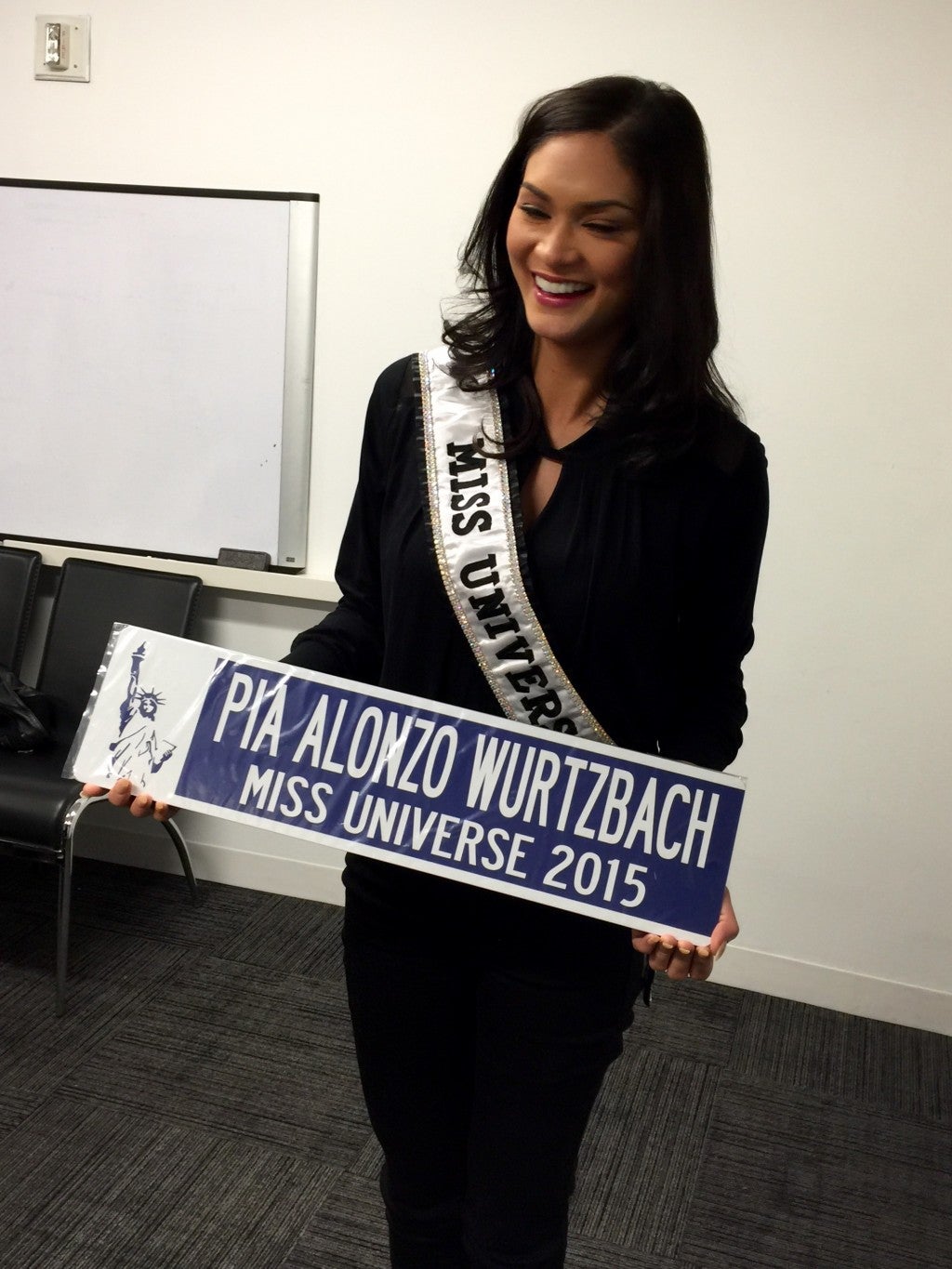 Miss Universe Pia Alonzo Wurtzbach happy to receive a souvenir license plate given by NYPD Officer Gavin Hormillosa, just one of her many fans in NYC.

“They tried to tell me to calm down and relax because I overdo everything, I overanalyze, I overwork, I study every day,” she said. “When I’m doing my makeup, I turn on the news so information is coming in. That’s how serious I am. I was living and breathing Miss Universe, so it paid off.”

The Visayan-speaking breadwinner revealed that a career in pageantry is tough and tedious. Those who are planning to join “must really want it.”

“My advice for the next Miss Philippines: fasten your seat belt, girl! It’s going to be tough. I’m not saying Miss Universe is tough, but the training in the Philippines is tough.

You’ve got to want it

As far as training is concerned, Wurtzbach said there were times when Binibining Pilipinas seemed harder to do than Miss Universe.

“In the Philippines, Binibini is two months preparation. In Miss Universe, it’s three weeks. So imagine all the activities done in three weeks. It’s so busy. Sometimes, there are three activities happening simultaneously every day. The hours of sleep are shorter. It’s really quite busy. But I would say it’s also a lot of fun,” she said.

“In some ways, it’s harder than Binibini but in some ways it’s easier because you don’t have people telling you how to be, because you’re far from home. So you don’t really have people coaching you or telling you how to act. So basically it’s on you, and I like that. I like being in control. I like to strategize on my own ‘cause I’ve done the training four years already,” she added.

Much harder to win

The pageant this year was also much harder to win.

“They added [to] the old format. We did the Q&A twice. We have the Global Fan Vote, which has never been done before. We have the contestants being the sixth judge. So it’s harder to win. There are so many twists and we only found out about the sixth judge the day before the pageant.”

This led Wurtzbach to apply a unique “attack” for each competition category.

It also helped that she loves to be in control.

“When I’m there, I’m alone. Binibini is not going to walk with me when I’m onstage. They’re not going tell me, ‘This pose, Pia’. Whatever I do there is my decision. I train with them for years but when I’m there, everything is up to me. I owe a lot to them because they trained me for a long time. They trusted me with this responsibility. I owe a lot to Binibining Pilipinas, but when you’re there, you’re alone.”

On January 23, Wurtzbach is set to travel to Manila for the first time since winning the crown in Las Vegas last month. She will be in the Philippines for less than a week.

“I’m excited to feel the humidity as I step out of the plane. I’m excited to experience the traffic on the way to the hotel. Just kidding. I’m excited to see everybody, my family, my friends. I’m excited to do the parade ‘cause I always did a lot of parades and motorcades back home when I was Miss Philippines. I hope now there’s going to be a lot more people.” 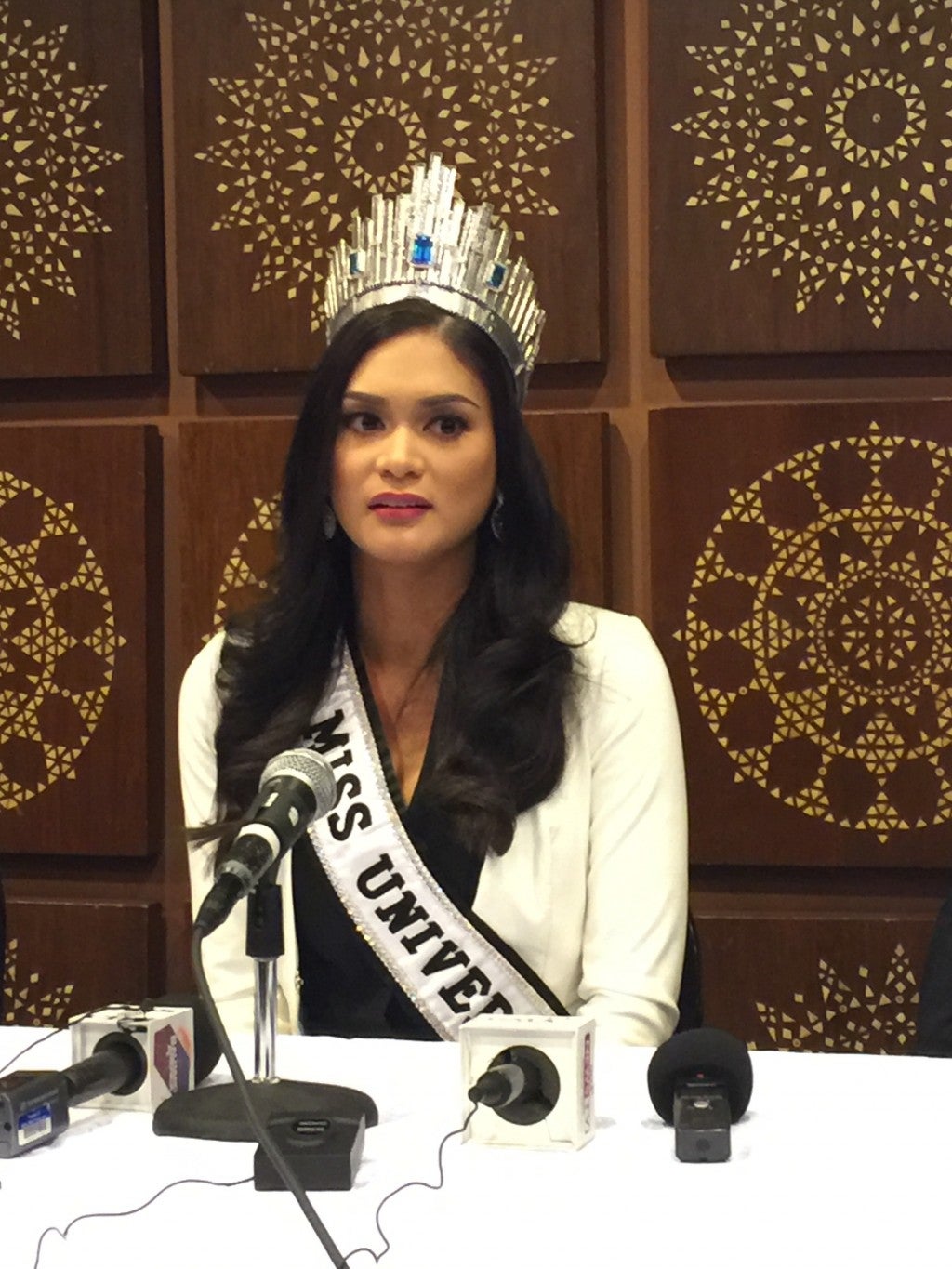 Much later after her reign, the third Filipino Miss Universe plans to continue on acting and hosting.

“If I get the chance to do it here, why not? And maybe I can have a talk show in the Philippines, who knows? Or a lifestyle show. I want to publish a book also. I’m already planning things in my head, so we’ll see.”

Does she get to keep her $300,000 Miss Universe crown after her reign?

“The crown is passed on. I’m the second Miss Universe to wear the crown. That was the same crown that Paulina [Vega] wore and now it’s with me. The crown is the actual crown that goes from titleholder to titleholder. But we get to keep a keepsake at the end of our reign,” Wurtzbach said.

“It happens to everybody not just celebrities, especially now that everyone has access to [the] Internet. It’s so easy to create an account and say whatever online. People don’t really understand how it makes the other person feel if they’re attacking the other person you know.

“With me, I know how to brush things off. I’m not affected by these things, but I can’t say the same for the younger people. And it’s something that happens to everybody. It’s something that’s relevant, something that I experienced myself growing up. So I want them to know that they’re not alone in this.”