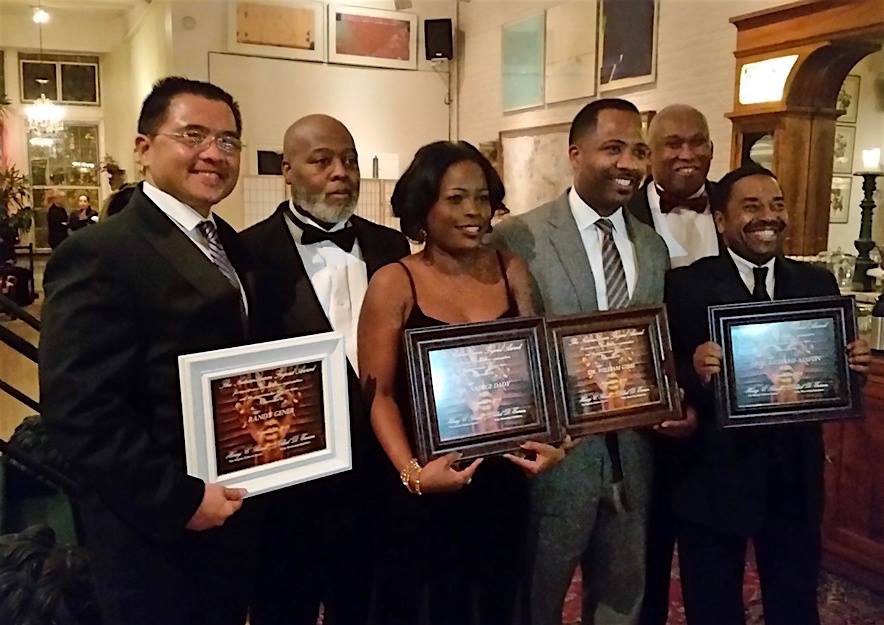 The award was presented to Gener (who has written for NPR, New York Times, Village Voice and American Theatre) and other honorees for “outstanding leadership and meritorious community service.”

Recipients of this unique award “exemplify unconditional sacrifice and service to the communities that they serve, and they stand as icons of stewardship to everyone,” stated Clark Everson, president of Unity Missionary Investors.

The Nubian Union is made up of two urban advocacy non-profit organizations focused on the alarming increase of brain injuries among minority youth:  Unity Missionary Investors, which aids economically challenged communities; and Nubian Cultural Center for Research & Development, a multigenerational program that promotes racial and ethnic harmony through cultural exchange and education.

“After reading about his story, Randy was one of our first picks,” Everson added. “He is deserving of our Legend Award.”

During the winter gala, Gener recounted his personal experience of being the unsuspecting target of a deadly assault in a bias-related hate crime and knockout game in the Broadway district.

On January 18, 2014, Gener was targeted and bloodily assaulted because of his identity as an Asian American and an openly gay man.  News of the violent attack landed in all major media in the U.S. and around the world.  Media coverage included the Wall Street Journal, New York Times, Huffington Post, New York Daily News, CBS, ABC and NBC, especially in France, Sweden, Asia, Czechoslovakia, Eastern Europe, where Gener has worked.

“What Jennings and his accomplice did was life-destructive and body crippling,” Gener said during the gala. “They were found guilty, but they are now free. On Facebook, Jennings remains unrepentant.”

A former Village Voice critic and until recently the senior editor of American Theatre magazine (published by TCG or Theatre Communications Group), Randy Gener is the most decorated arts and culture editor of his generation. He is now proprietor of In the Culture of One World (cultureofoneworld.org), a live event and media project.

Gener is TCG’s only American Theatre magazine staff editor — and the first and only Asian American — to earn the legendary George Jean Nathan Award for Dramatic Criticism. Judges for the Nathan Award are the English and theater departments of Yale, Princeton and Cornell Universities. Given annually since 1958, the Nathan Award is considered the Academy Award of U.S. theater criticism.

In 2013, the year before he was attacked, Gener played a major instrumental role in a nationwide social-media effort and petition campaign, signed by 2,700 people on change.org. The adventurous Cuban-born playwright and director María Irene Fornés, 82, who has Alzheimer’s disease, had been left abandoned in upstate New York.  The campaign successfully transferred Fornés to Amsterdam House nursing home, where she has gained better spirits.

Gener was the recipient of a Philippine Presidential Award in 2010, which officially designated him as a “Living Legacy of the Filipino Nation (Pamana ng Pilipinas).”  President Benigno Aquino III conferred the award on Gener at the Malacanang Presidential Palace. He was the first to be honored solely for an American theater career.

“These good people held vigils and protests,” Gener said. “They rallied for justice in the streets and via Facebook. They worked to fundraise in my behalf, since my former employer TCG had left me with no health insurance. I am lucky to be alive today.”

“The Will Smith film, ‘Concussion,’ ” said Gener, “is a rare Hollywood feature film which deals with the life-threatening dangers of playing football.  But it’s not just professional athletes who suffer concussions. They can occur anywhere. Most head injuries happen to regular people in living their lives.  Hate crimes and knockout games randomly happen in New York City.  Head injuries have destroyed normal lives.”

Gener will advocate for giving urgent support and access-to-resources to urban minority youth who have been violently head-injured and who have survived concussions and traumatic brain injuries.