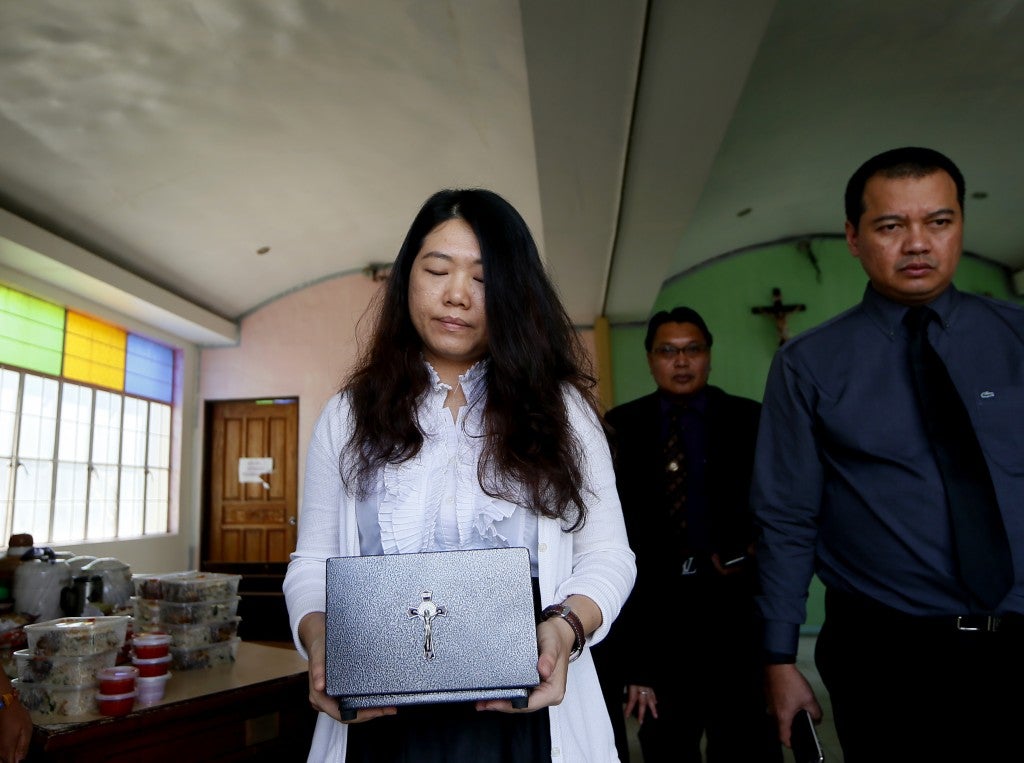 Chan Wai See, the widow of Malaysian hostage Bernard Then, carries the urn containing his ashes after cremation in Pasay City on Jan. 15. AP

The grieving wife and siblings of a Malaysian hostage who was beheaded by Abu Sayyaf extremists in the southern Philippines retrieved his remains in Manila on Friday, visibly stunned after seeing his body for the first time.

Bernard Then was kidnapped with a compatriot, Thien Nyuk Fun, in May in Malaysia’s Sabah state and taken by boat to the province of Sulu. Thien was freed in November reportedly after a huge ransom was paid, but Then was found beheaded.

“Today we see the closure of a very tragic episode that happened to one of our Malaysian citizen,” said Malaysian official Fatimah Abdullah, who consoled and accompanied Then’s family to Manila.

“It is very difficult for the family involved and for us as a nation,” she told The Associated Press after Then’s family had his remains cremated.

Then’s wife, sister and three brothers wept quietly and embraced each other when they saw him in a white coffin at a funeral parlor. A Roman Catholic priest celebrated Mass and apologized for the tragedy that befell them in the neighboring Southeast Asian nation. After cremation, Then’s wife took the ashes away in a dark urn emblazoned with a cross.

Malaysian Prime Minister Najib Razak asked Philippine authorities in November to punish the kidnappers who beheaded Then, an engineer from Malaysia’s Sarawak state, saying he and his people were “shocked and sickened” by the gruesome killing.

Abdullah said the public and communities must help their governments fight terrorism by rearing the young to respect laws and value life.

“The governments are making concerted efforts but we should not leave it to the governments alone,” she said. “The core values of a human being must be instilled.”

It remains unclear what prompted the militants to behead Then. A ransom negotiation was reportedly still underway when he was killed around the time Najib flew to Manila to attend the Asia-Pacific Economic Cooperation summit in November.

The Abu Sayyaf militants have been weakened but have survived more than a decade of US-backed offensives.

They are suspected of kidnapping two Canadians, a Norwegian and a Filipina from a marina in the south in September. Militants who identified themselves in an online video as belonging to the Abu Sayyaf have demanded more than $60 million for their release.