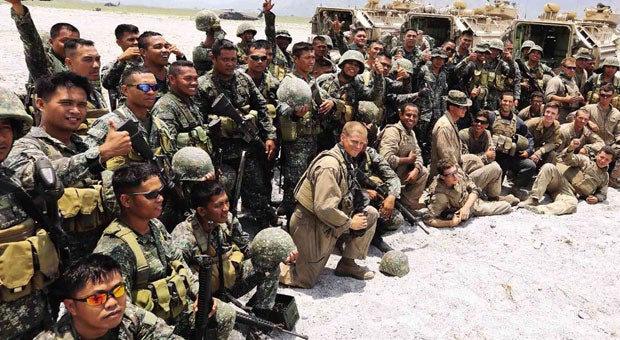 Philippine and US Marines, some of whom managed to smile, pose for a souvenir photo after their live fire RP-US Balikatan military exercises at Crow Valley in Capas, Tarlac province. INQUIRER FILE PHOTO

BEIJING—China harshly criticized the Philippine Supreme Court’s backing of a defense pact allowing American forces, warships and planes to be based temporarily in local military camps, with an editorial in state media on Wednesday calling the move “stupid” and warning of consequences.

The strongly worded editorial in the official Xinhua News Agency said the agreement would “only escalate tensions and undermine peace and stability in the region.”

The Philippines “appears to be now turning to Uncle Sam to back its ambition to counter China,” the article said, employing a phrase harking back to the Cold War.

The high court’s ruling declaring the pact constitutional bolsters US efforts to reassert its presence in Asia and dovetails with Philippine desires for American help in countering China’s maritime claims in the South China Sea.

The United States immediately welcomed the court’s decision, saying the defense pact will bolster both countries’ ability to respond to disasters and strengthen the Philippines’ military.

Xinhua dismissed such assertions as attempts to rationalize an ill-advised move. “Manila has to bear the negative consequences of its stupid move in the future,” it said.

China responded almost immediately by ramping up its presence in the South China Sea, including areas claimed by the Philippines. Vietnam, Taiwan, Malaysia and Brunei also have overlapping claims in the strategically vital sea through which around $5 trillion in world trade passes each year.

Recent years have seen Manila turn to Washington as it scrambles to strengthen its military, one of the worst equipped in Asia.

Tensions have been especially high since Beijing transformed seven disputed reefs into islands on which it is now constructing runways and facilities that rival claimants say can be used militarily.

Su Hao, an international relations expert at China Foreign Affairs University, said Washington was likely to have engineered the court’s decision to uphold the pact, a claim also made by Xinhua without offering evidence.

Su said China may feel compelled to respond by boosting its own military presence in the region, in which both its Navy and Coast Guard operate constantly.

“It may lead to the direct military confrontation in the South China Sea between China and the United States, therefore having a negative impact on the current situation of the region,” Su said. AP