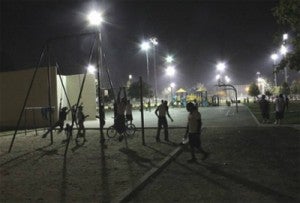 LOS ANGELES–Last year, for the first time in over a decade, all categories of crime rose across Los Angeles, according to data from the Los Angeles Police Department.

The data marked the second year in a row that violent crime rose, but the first time since 2003 that both violent and property crime rose, reported the Los Angeles Times.

The increases follow more than a decade of steep declines in overall crime, particularly in homicides. Police officials said that the recent upswings should be viewed in that larger context.

“We ask people to keep this in perspective,” said Assistant Chief Michel Moore, who oversees the Los Angeles Police Department’s crime-tracking unit. “The city is not on fire, the city is not falling into the ocean.”

Nonetheless, the increases in general crime have sparked concern in neighborhoods across the city, including areas in Southside that have seen more jumps in gang-related homicides, as well as more affluent areas where residents have complained about thefts and car break-ins.

In Venice, thieves have taken packages from doorsteps, pocketed smartphones from pedestrians and attempted to steal cars during the day, said resident George Francisco, co-chairman of the Venice Neighborhood Council’s public safety committee.

“I walked out of my apartment on Main Street and there was a dude just slim-jimming a car in full daylight,” Francisco said of an incident last summer. He called 911, and the suspect was apprehended before stealing the car.

Francisco said he routinely talks to officials at the LAPD’s Pacific Division and believes they are working hard to address the nearly 10 percent property crime increase in Venice Beach. But some residents are fed up.

“There is definitely frustration,” he added. “Once you are a victim of crime you look at things differently. I think people will learn and become aware when they hear more of these things happening.”

In South Los Angeles, troubling increases in violent crime were reported this year. In 2015, the region experienced its deadliest August since 2007, with 15 people killed in the last two weeks of the month.

“There is the knee-jerk reaction of sending in the cavalry to occupy the streets, and I think they resisted that instinct,” Harris-Dawson said. “I think their integration in the community makes it much easier for the community to work with the police rather than be concerned about what the police might do.”

Since the expansion of the Metro unit, which works with gang interventions, began in July, citywide violent crime figures dropped 1 percentage point, while the property crime rate did not change.

Police officials said they believe their strategies are overall a success. The Metro unit has taken 236 guns off the streets since July, nearly three times as many as in the first half of the year, Moore said. Felony arrests by Metro officers have also tripled.

Rapes in the city were up 8.6 percent, and robberies rose 12.3 percent. The biggest crime climb, however, was aggravated assault (27.5 percent).

Some portion of the increase in serious assaults was the result of improvements in how the department classifies those offenses, Moore said. LAPD officials quickly launched reforms, after a 2014 Los Angeles Times investigation found widespread errors in how assaults were classified.

All 21 LAPD divisions reported crime increases this year, particularly Central Division—which includes parts of downtown, Skid Row and Chinatown—which led the city in both violent and property crime increases. Although the violent crime rate dropped by 15 percentage points since the summer, property crime was up slightly in the second half of the year.

More in other cities

LAPD officials were quick to note that other large U.S. cities have also reported more homicides in the past year, including New York, Chicago, and Houston.

“Despite the increase in crime, the city remains safer than at any time since the 1950s,” said Vicki Curry, a spokeswoman for Garcetti.

“But that’s little comfort to those whose lives have been impacted by crime.”