SC allows more US forces to base in PH 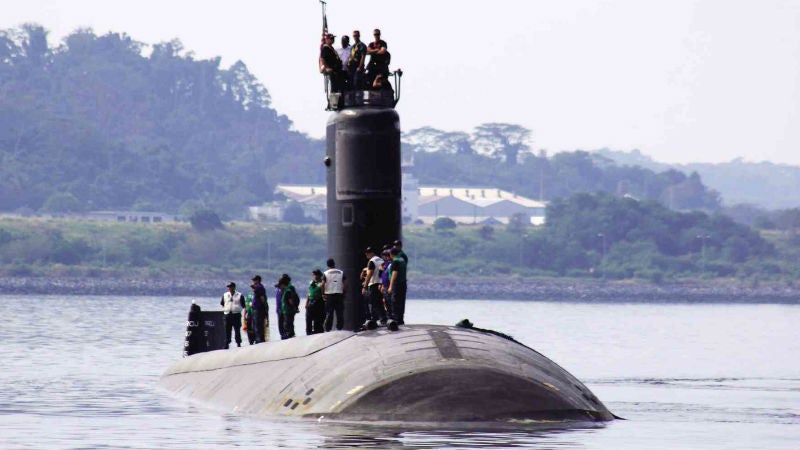 INCREASED US PRESENCE USS Topeka (SSN-754), a Los Angeles-class attack submarine, is docked at the Alava Pier of Subic port for a three-day port stop. The Supreme Court declaration that the Enhanced Defense Cooperation Agreement between the United States and the Philippines will allow US forces to use Philippine military facilities, including the former US Subic Naval Base in Zambales province and Clark Air Base in Pampanga province. ALLAN MACATUNO/INQUIRER NORTHERN LUZON

IN A RULING that allows the basing of more US military forces in the Philippines in the face of aggressive Chinese incursions in the South China Sea, the Supreme Court on Tuesday upheld the constitutionality of the Enhanced Defense Cooperation Agreement (Edca) between Manila and Washington.

In a 10-4 vote, the court removed the legal impediment that hung over the pact for nearly two years, junking two petitions questioning Edca’s constitutionality just as Philippine and US officials met in Washington to discuss China’s escalating military buildup in the region’s waters.

Coincidentally, just hours before Supreme Court spokesperson Theodore Te announced the ruling, a US attack submarine arrived at the former US naval base on Subic Bay.

Both the Philippines and the United States welcomed the court ruling.

“The Edca is a mutually beneficial agreement that will enhance our ability to provide rapid humanitarian assistance and help build capacity for the Armed Forces of the Philippines,” the US Embassy said.

President Aquino’s spokesperson, Herminio Coloma Jr., said Edca would introduce the AFP to “the most modern equipment and have a generational leap in our abilities.”

China’s continuing incursions and land reclamation in the resource-rich waters of the South China Sea have been a lingering security concern in the Asia-Pacific region, becoming a backdrop for the signing of the Edca as an executive agreement in April 2014 to allow greater rotational presence of American troops in Philippine military bases.

“As it is, the Edca is not constitutionally infirm. As an executive agreement, it remains consistent with existing laws and treaties that it purports to implement. Wherefore, we hereby dismiss the petitions,” the high court said in its ruling, a summary of which was released Tuesday.

The full decision has yet to be released. Those who dissented were Justices Teresita Leonardo-De Castro, Arturo Brion, Estela Perlas-Bernabe and Marvic Leonen. Associate Justice Francis Jardeleza had no part in the ruling, having handled the case during his time as Solicitor General.

One of the petitioners, Bagong Alyansang Makabayan (Bayan), said it would seek the court’s reconsideration of the case. The group decried the ruling as a “de facto reversal of the 1991 Senate vote to boot out US bases from the Philippines.” A separate plea was filed by former Senators Rene Saguisag and Wigberto Tañada, who were among 12 senators who had voted against the US bases.

The court’s majority decision held that as the government had argued, the Edca was an implementing agreement of the 1999 Visiting Forces Agreement (VFA) and the 1951 Mutual Defense Treaty (MDT), ruling that the treaties already provided for the rotational presence of US troops here.

The Edca falls under Article XVIII, Section 25, of the 1987 Constitution, the high tribunal said. This grants the President the power “to enter into an executive agreement on foreign military bases, troops or facilities if “it is not the instrument” that allows such military basing, and “merely aims to implement an existing law or treaty.”

Through the “ponencia” by Chief Justice Maria Lourdes Sereno, the court held that “the Edca is one such executive agreement,” as it is not the principal pact through which US military presence was allowed, Te said in a press briefing.

“The court ruled that the Edca is not the instrument that allows US ‘troops or facilities’ to enter as the VFA has already done that,” said Te.

“The Edca provides arrangements to implement existing treaties allowing entry of foreign military troops or facilities under the VFA and the MDT, and thus may be in the form of an executive agreement solely within the powers of the President and not requiring Senate concurrence,” he said.

“The executive agreement must not go beyond the parameters, limitations, and standards set by the law and/or treaty that the former purports to implement and must not unduly expand the international obligation expressly mentioned or necessarily implied in the law or treaty,” it said.

The court ruled that the President must be accorded wider discretion in making decisions regarding external affairs, limited only by the letter of the law. 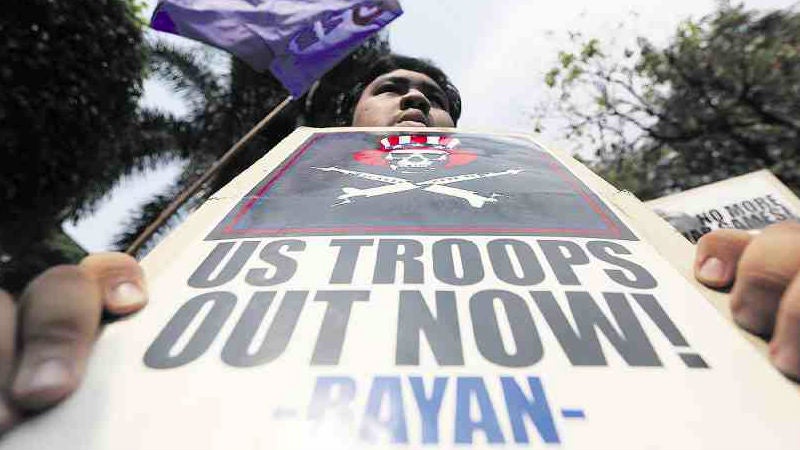 PROTEST AGAINST EDCA Militant groups picket in front of the Supreme Court building in Manila just before the high court’s announcement that the Enhanced Defense Cooperation Agreement (Edca) is constitutional. MARIANNE BERMUDEZ

“No court can tell the President to desist from choosing an executive agreement over a treaty to embody an international agreement, unless the case falls squarely within Article XVIII, Section 25,” Te said in summarizing the court’s ruling.

“In view of the vast constitutional powers and prerogatives granted to the President in the field of foreign affairs, the task of the court is to determine whether the international agreement is consistent with the applicable limitations,” he said.

The Edca provides for increased rotational presence of US troops in the Philippines, allowing more opportunities for the long-standing defense allies to undertake joint military exercises in the areas of mutual defense and disaster response.

Defense Secretary Voltaire Gazmin and US Ambassador to the Philippines Philip Goldberg signed the pact just before US President Barack Obama arrived in Manila for a state visit in April 2014.

The Supreme Court ruling came amid America’s continuing strategic pivot to the Asia-Pacific, and the Philippines’ attempts to strengthen its defense amid the disputes in the South China Sea.

Solicitor General Florin Hilbay, who defended the Edca on the government’s behalf, hailed the court decision, saying it “paves the way for an enhanced security arrangement that will respond to the current domestic and regional concerns.”

“It also breathes a practical spirit into one of the oldest defense alliances, creating a new platform for cooperation between the Philippines and the United States. It reaffirms the potency of the powers of the President as Chief Executive, Commander in Chief and chief architect of foreign affairs,” Hilbay said in a statement.