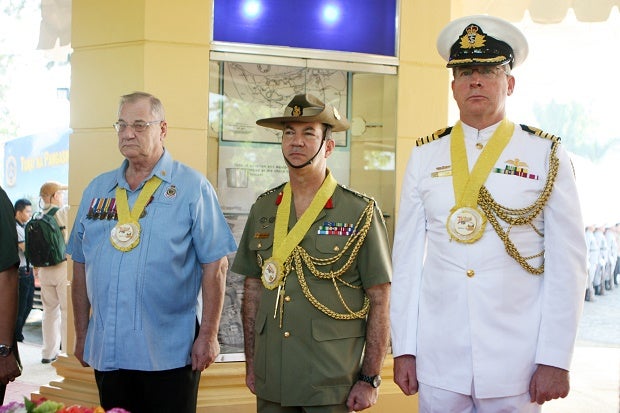 LINGAYEN, Pangasinan—James Curtis Smith was one of the World War II veterans who joined the annual commemoration of the Lingayen Gulf landings here on Saturday. But the people here soon realized who Smith was when he was introduced to lay a wreath to the fallen World War II soldiers.

He is none other than the father of movie and television actresses Anne Curtis and Jasmine Curtis Smith.

Smith, 72, a lawyer and former officer of the Royal Australian Navy, immediately became the star of the program. Sons and daughters of veterans and government employees lost no time in having their pictures taken with him.

He has been attending the Lingayen Gulf landings commemoration since 2008 as president of the Philippine branch of the Returned and Services League of Australia.

“Every year, we come here to honor the efforts of the veterans—all veterans, [whether] Filipino [or] American, but we also had Australians on the ships that brought the troops to that second landing.

“And so we make a point of honoring that memory,” said Smith.

He said 13 Australian ships were with the Allied Forces led by American Gen. Douglas MacArthur when they landed on the shores of Lingayen Gulf to free Luzon from the Japanese Army.

A memorial to fallen Australian soldiers has been erected at Veterans Park here.

Smith said he was no stranger to Pangasinan, having visited the province in 1973 while working with the Australian government.

“I love this place very much [that I] kept coming back and forth and married the mother of Anne in 1982… I’m very happy to be here,” said Smith, who lives in Angeles City.

His wife is Carmen Ojales, who is from Barangay Catuday in Bolinao town.

“Three live in Australia, one lives in Bahrain, three live in London. They’re all over the place. Five of them are in the Philippines,” he said.

Although Anne and Jasmine both live in Manila because of their work commitments, Smith said he was close to them.

“Some people recognize me because of my daughters. They know Anne and Jasmine and they like to have a picture with the father of the celebrities because that can be the closest they can get to my daughters.”

Ambeth Ocampo: History does not repeat itself, it is we who repeat it