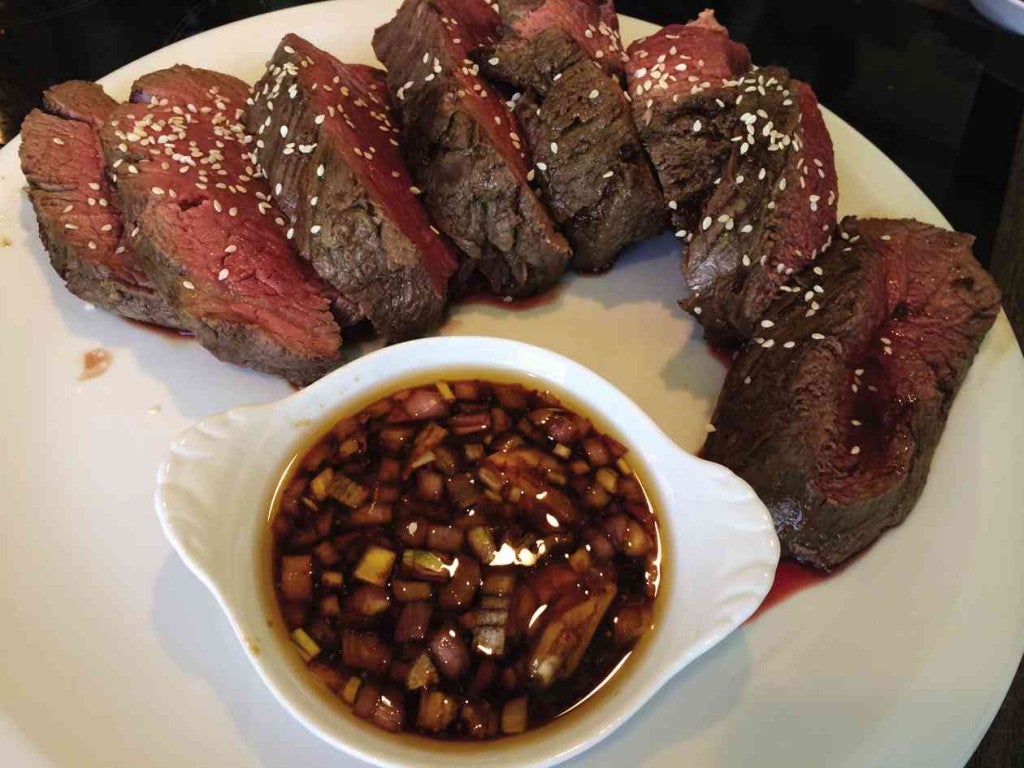 French steak with “toyo” (soy sauce) and onions as sauce

Adobo and pancit are not exotic food to the CEO of Security and Telesurveillance Co. in Paris, France.

In fact, the French had to develop their gustatory taste to traditional toyo (soy sauce) and patis (fish sauce).

“I do fusion cuisine. I practice French discipline and technique but I use Asian sauces on French cuisine which doesn’t usually use soy sauce, fish sauce and the likes.

“But in my kitchen it’s a mainstay and they are beginning to love it. But for adobo, I have to cook it differently. They always prefer it a little bloody in the inside,” says Cesar Molina, 42, the chef of the company.

Before coming to France, he worked at the marketing department of United Laboratories in Manila for 10 years.

But things did not get better as his family grew. Molina left the Philippines in 2008 with only a two-week tourist visa in France and did not come back to Manila for several years.

“It was a gamble. But I have to do it to give my children a better life,” he says. Aside from that, he wanted to acquire new knowledge and experience living in a First World country.

Presently, he has a temporary residence card after being an illegal immigrant for five years. The card allows him to work regularly and receive benefits.

Because of that he could freely travel and was able to visit his family after five years. Molina is now working on their documents so they could live together again.

Paris is one of the most expensive cities in the world. Yet, the opportunities abound for those who are not choosy when it comes to jobs.

“I did almost everything since I didn’t have legal papers for four years. I did housekeeping, babysitting, English language tutoring, caregiving and other odd jobs,” says Molina.

Keeping in touch with fellow Filipinos who had been there for a long time is important because they could refer someone to work or as a reliever in a household.

Even with a regular job now, Molina says that many Filipinos have double or even multiple jobs. Aside from being a chef, he does some sidelines like event management and hosting. He also has a sound system rentals business to augment his income.

Molina had to learn basic French. Until now, he is still learning through multimedia and talking to the people.

Cooking may not be his passion. But it was an opportunity for Molina to get a working permit.

“I did some short courses in Le Cordon Bleu and L’Atelier de Cuisine. It was an opportunity that came from nowhere since it was offered to me by a friend.  I had the courage to do it since it will be the chance to have a working permit,” he says.

When he finished his short course, he was able to apply to Security and Telesurveillance Co. He is a chef for the executive board and clients.

“I have less interactions with French chefs aside from hands-on training. They highly value  sanitation and they have very good techniques in preparing dishes,” he says.

Molina says that there is no discrimination in his kitchen.

“I don’t really feel the discrimination at work because maybe since I am preparing the food of the CEO, people treat me as part of the executive board.”

So far, Molina’s  most famous dishes are steaks and salads, with a Filipino twist. Wine is a regular in every dining. So he is an expert on which types of wine to partner with foods.

Molina also dreams of having his own restaurant in France when he gains more experience.

Being an overseas Filipino worker (OFW), he advises others to focus on the reasons why they left the country.

“We need to get educated with earning and spending our hard-earned money, which unfortunately ends up in unnecessary spending on high-tech gadgets, fashion, etc. It’s a two-way process though. We also need to educate our families back home to spend well the remittances we send to them.”

“We, OFWs, have a big role in transforming the Philippines to a highly competitive country if we bring in the various technologies, discipline and knowledge we learned from our host countries in the event we go home and stay for good,” he says.