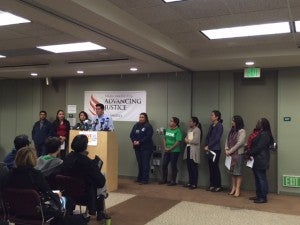 LOS ANGELES – Immigrant rights advocates say that a year after the passage of AB 60–the Safe and Responsible Driver Act–more than 595,000 undocumented Californians have successfully obtained their driver’s licenses. But Filipino applicants represent only a small number of those who have received legal permission to drive. The reason: additional processing requirements.

This was reported at a press conference Tuesday, January 6, when several advocates led by the Asian American Advancing Justice – Los Angeles (Advancing Justice LA), marked the first year anniversary of the historic legislation.

These groups are calling for improvements to fix problems with the law’s implementation, which have left some immigrants, particularly Asians, Pacific Islanders, Filipinos and Africans, waiting for a long time for their applications to be processed.

The nationals from many of these countries are sent to interviews where they are asked to provide additional documents to verify their identity.  Being scheduled for interviews has taken months to complete. 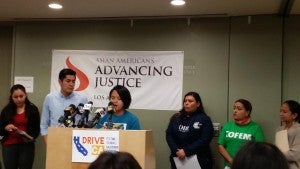 Other countries such as Mexico, which has a security agreement with the Department of Motor Vehicles, need only present one document to prove identity.

“One of the key issues Filipinos face with applying for an AB 60 license is the DMV’s stringent documentation requirements,” according to community organizer Nicole Cababa of the Filipino Migrant Center.

Cababa said many Filipinos have been wrongfully pushed into a Secondary Review Process (an interview), which can take more time and tend to confuse community members. “Other issues include poorly translated DMV documents and lack of Tagalog-speaking staff.”

Armando Botello, Deputy Director of the DMV’s Office of Public Affairs in Sacramento noted that the number of applications that required a secondary review exceeded DMV expectations. As a result, the wait time in some cases exceeded four months.

Advancing Justice LA, through its spokesman, Anthony Ng, said DMV records show that there are 1.5 million to 2 million Californians eligible to apply under AB 60, yet less than half of this population has been able to avail of the benefits to date.

Ng said, “The law has changed lives and created powerful new opportunities for community members who worked diligently for two decades to make the licenses a reality. With so many more drivers licensed, tested and insured, Californians are benefitting.”

Cababa told INQUIRER.net, “We share the concerns of Filipino care givers, youth, parents and workers who need an AB license to get to school, work, church and take care of their families. With over a million Filipinos living in California, we know there are many of them who can still benefit from AB 60, DAPA and DACA. “

One of the reasons for the lower turn out of Filipino applicants is fear of deportation.   “We are confident that the more education, outreach and organizing in the community would help Filipinos take advantage of the programs and win even more positive change in the future,” Cababa said.

She added that the FMC has assisted over 50 members facing challenges with the Secondary Review Process and conducted outreach events through workshops, trainings in Tagalog/English in Long Beach, Los Angeles and the greater South Bay area. “We don’t have the estimate of Filipinos who received an AB 60 license because we were told that the DMV does not disaggregate the data by ethnicity.