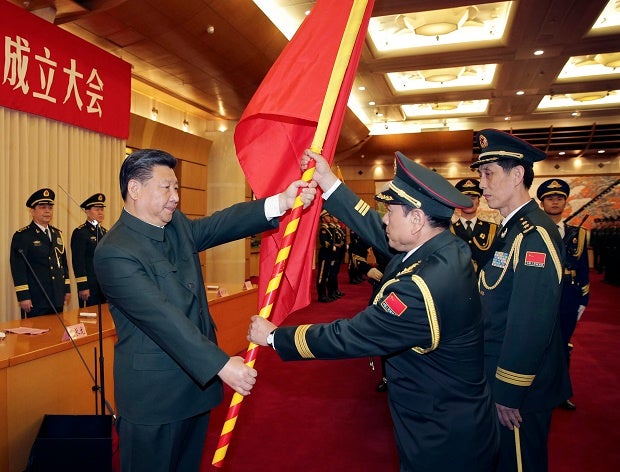 State television on Saturday showed President Xi Jinping giving military flags to the leaders of the three new units—a general command for the People’s Liberation Army, a missile force and a strategic support force. At the ceremony, which took place Thursday, Xi and PLA officers and soldiers sang the national anthem.

Xi said the three new units were created as part of a modernization reform and “to realize the Chinese dream of a strong military.”

He has promulgated the idea of a “Chinese dream” involving “the great renewal of the Chinese nation” and sees a strong military as key to this.

The military reform comes as China has become more assertive in pressing its claims to territory in the East China Sea and South China Sea, increasing tensions with its neighbors.

In a bid to show China poses no expansionist threat, Xi announced in September that he would reduce China’s 2.3 million-strong army by 300,000 troops. However, it will still remain the world’s largest.

Described by Xi as a “core force of strategic deterrence,” the PLA Rocket Force will replace the Second Artillery Force in controlling China’s nuclear arsenal and conventional missiles. The new Strategic Support Force will likely focus on cyber warfare.

Other reform plans include phasing out old equipment and developing new weapons systems.

The reforms also tighten the party’s leadership over the army. It used to be supervised by four headquarters, while now the army’s general command is controlled directly by the Central Military Commission, whose chairman is Xi.

The military has been the focus of an anticorruption campaign spearheaded by Xi. The two highest-ranking officers to be accused of taking bribes were vice-chairmen of the Central Military Commission.

Read Next
Bong Go visits SPMC staff and patients watchers on New Year’s Eve
EDITORS' PICK
Water remains our saving grace right now
Navotas will be on lockdown from July 16 to 29 – Tiangco
World-standard accounting: Unlocking your financial potential
Defend Your Health! Shop health essentials from home with Rose Pharmacy’s Online Sale
COVID-19 wards in 2 more hospitals reach full capacity
Chatting with companions, answering calls on MRT 3 trains banned
MOST READ
‘I am not my father,’ says daughter of lawmaker who voted to deny ABS-CBN franchise
In slap on face of PH, China replies to Locsin on tribunal ruling: It’s invalid
Vilma Santos-Recto ‘prepared’ to face ‘consequences’ over ABS-CBN franchise vote
Did a meme get on Agot Isidro’s nerves? She’s asking ’24 Oras’ to fact-check it
Don't miss out on the latest news and information.