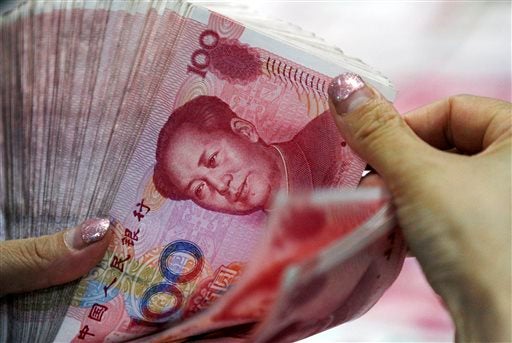 FILE – In this Tuesday, Aug. 11, 2015 file photo, a bank clerk counts Chinese currency notes at a bank outlet in Huaibei in central China’s Anhui province. Chinas unexpected move this week to lower the value of its tightly-leashed currency, the yuan, sent shockwaves through global financial markets. The impact on consumers around the world and Chinas neighbors will take longer to play out but possible winners and losers are already emerging. (Chinatopix via AP, File) CHINA OUT

As the Philippines strikes a balancing act, the country’s membership in the Chinese-led Asian Infrastructure Investment Bank (AIIB) is not expected to affect government’s resolve to pursue its case to invalidate China’s expansive territorial claim in the South China Sea.

For Hilbay, the AIIB membership just shows how the Philippines continues to recognize China, among the world’s largest economies, as a crucial trading partner.

“Economic cooperation between the Philippines and China is not incompatible with the resolution of our maritime disputes,” said Hilbay, the country’s agent in the arbitration case against China pending in a United Nations tribunal in The Hague.

“Philippine membership in AIIB simply is consistent with our position that China remains an important economic and political partner, even as we peacefully disagree about maritime entitlements under Unclos (United Nations Convention on the Law of the Sea),” the official told the Inquirer.

He made the statement when asked how the Philippines’ AIIB membership might affect ties between Manila and Beijing, and possibly the country’s resolve to forge ahead with its bid to keep China out of the country’s 370-kilometer exclusive economic zone (EEZ) in the disputed South China Sea.

The new institution, which has been compared with the Asian Development Bank and the World Bank, is set to begin operations within the month.

China was the country’s second-largest trading partner in 2014,

accounting for 14.3 percent or $18.337 billion of Philippine total trade that year, according to a Philippine Statistics Authority report released in July 2015.

Philippine membership in AIIB comes while the country’s top defense and trade allies, the United States and Japan, shunned AIIB.

The two nations, Asia-Pacific powers deeply concerned about regional security, have expressed support for the Philippines’ peaceful efforts to settle the maritime disputes in the South China Sea, which Manila calls the West Philippine Sea.

The Department of Foreign Affairs earlier said the AIIB membership was unrelated to the maritime dispute.

The Philippines is expecting the UN tribunal to make a decision on its case in the first half of the year.