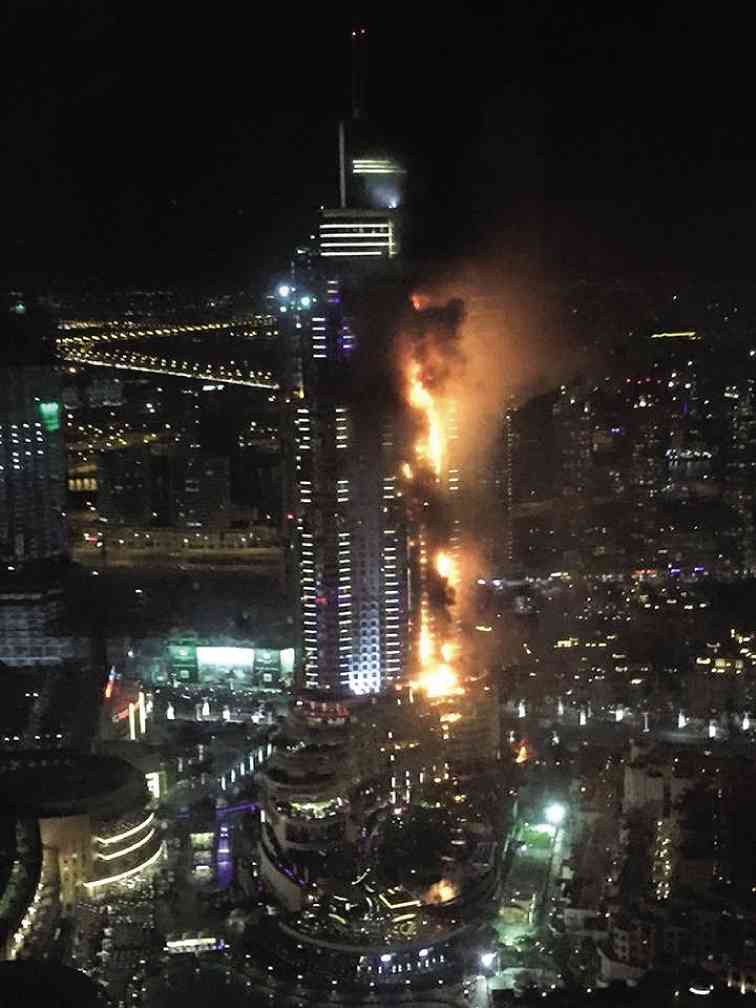 FIERY START OF 2016 IN DUBAI Smoke and flames pour out of a building in Dubai, United Arab Emirates, as fire runs up some 20 stories of the high-rise while tens of thousands of people gather at the base of the nearby Burj Khalifa, the world’s tallest building, for one of the world’s largest New Year’s fireworks. TREVOR HALE VIA AP

DUBAI, United Arab Emirates—A towering inferno that engulfed a 63-story luxury hotel in Dubai on New Year’s Eve burned on into the first morning of 2016 as firefighters tried to douse the flames on Friday.

The blaze at The Address Downtown, one of the most upscale hotels and residences in Dubai, comes after a series of fires striking the towers that provide this megacity its futuristic skyline.

While Dubai officials said only 14 people suffered minor injuries in evacuating the building late Thursday night, the fire raised new questions about building safety for those living in the United Arab Emirates.

The fire started at 9:30 p.m. on Thursday, racing up the sides of the building and sending thick smoke over the skyline.

Authorities still conducted a midnight fireworks show at the nearby Burj Khalifa, the world’s tallest building.

More than 12 hours later on Friday morning, Dubai firefighters largely watched the fire from the ground, unable at one point to use a water hose on a ladder truck. They later regained water pressure and began spraying the building.

Restaurants nearby opened for business, but served limited menus as civil defense officials cut natural gas to the area.

Dubai’s Media Office wrote on its official Twitter account that the fire appeared to have started on a 20th-floor terrace, though witnesses who saw the blaze start said they believed it began on the building’s ground floor. No one has yet offered a cause for the fire.

Around 1 million people had been expected to gather around the Burj Khalifa skyscraper to watch the fireworks. Dubai’s economy depends heavily on tourism, and New Year’s is one of the busiest seasons, drawing people from around the world to watch the fireworks that the emirate puts on at the world’s tallest tower, as well as the sail-shaped Burj Al Arab and over a man-made palm-shaped island.

Dubai has been challenged by a series of tower fires. In February, a similar blaze spread along the external cladding of Dubai’s 86-story Torch Tower, one of the world’s tallest residential buildings. There were no serious casualties in that fire. In October, another fire broke out in a high-rise residential tower in the Emirati city of Sharjah. AP