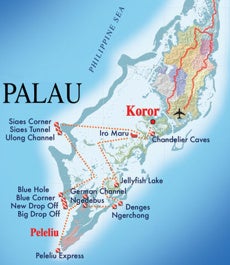 SAN FRANCISCO–Four Filipino nationals were charged before the Palau Supreme Court on Christmas Eve for allegedly trafficking and possessing illegal drugs. Palau is a Western Pacific republic in free association with the U.S.

The four were arrested in two major undercover operations conducted by the Belau Drug Enforcement Task Force (BDETF) between December 23 and 24, according to a report from Island Times in the city of Koror.

Police said an informant told the Task Force that a male Filipino identified as Cueto was trying to sell eight grams of “Ice” for $8,000. Undercover operatives nabbed Cueto and Macuha as they tried to sell the methamphetamine.

Quiban and Pamatian were nabbed in a similar undercover operation. They allegedly had in their possession over 32 grams of meth that they tried to sell to police operatives at the PITI barracks.

According to Bechab, Quiban arranged a meeting at the PITI barracks to pay Pamatian for the sale of drugs.

Emperador in, Semirara out of PSEi