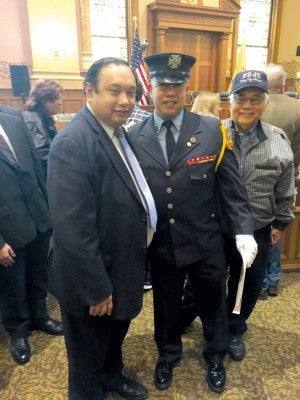 JERSEY CITY, New Jersey—A dozen firefighters including, Filipino American Jonathan Gamutan, were promoted to fire captain last week during a simple ceremony at the City Hall. Two others rose to the rank of battalion chief.

Mayor Steven Fulop, who led the list of elected officials and guests who witnessed the event, extolled the firefighters in short speech.

“I have seen first hand how our firefighters work – the work that they do, the intensity that they show, the teamwork that they exude. It’s something,” Mayor Fulop said.

Also among those promoted was James Woods, a 44-year-old firefighter who died a day after Christmas last year.

“I’m proud of my background and at the same time, I’m a proud American as well,” the 51-year-old firefighter told the Asian Journal moments before the ceremony started.

Gamutan’s relatives – parents – Paul and Charito, wife Jane, brother Anthony and children Sabrina, Jonathan, Jr., Brandon and Derek – all came to witness the event. His parents migrated to the United States in 1969 when Jonathan was only five years old.

“Ang sarap ng pakiramdam. Masaya kami,” said Charito Gamutan, Jonathan’s mother. “We supported him all the way when he told us he wanted to become a firefighter.”

“Congratulations and thank you to our brave firefighters who were promoted today — 2 to battalion chief and 11 to the rank of fire captain, including Jonathan Gamutan, the first Filipino American who enlisted to the JCFD and now its first Filipino fire captain after nearly two decades of service,” said Council President Rolando Lavarro. “Our deepest thanks to the family of firefighter James Woods, who passed away last year, and promoted posthumously today to the rank of Fire Captain.”