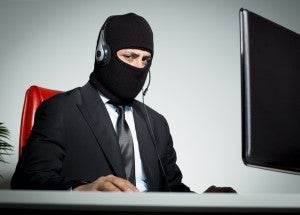 HOUSTON, Texas — When you work for a bank, you see people making remittances or wiring money every day. And you know when the transaction raises a red flag.

That’s what happened a few weeks ago to Tito Refi, a Filipino American senior vice president of Southwestern National Bank. Refi said a retired military man walked into the bank and wired $5,000. The man had been wiring the same amount each week for the past few months.

When a bank teller commented that his business must be doing very well, the man told her that he was just sending money to someone he had not met.

It turned out to be a scam.

“The man had already wired a total of $30,000, losing a lot of his retirement savings,” Refi told reporters at a roundtable briefing with ethnic media, community-based organizations and the Federal Trade Commission (FTC). “He told us that his wife didn’t know anything about it.”

According to Federal Trade Commission officials, the rate of consumer scams in Texas has been high. These scams mostly involve impostors calling potential victims on the phone and posing as government officials from the IRS or the Department of Homeland Security.

Dama Brown, director of the FTC Southwest region, says that in 2014, they received about 150,000 complaints from Texans who fell victims to scams. About 25,000 of them came from residents of Houston.

But many victims of fraud don’t file a complaint, Brown said.

The average amount that each victim in Texas lost to scams last year was $2,300 — and 44 percent of them paid or wired cash, Brown said.

“I have heard people say, ‘I can never fall for that scam,’ but that’s not true,” she said. “They will always look for trigger points, whether about your children, your taxes or your debt.”

Brown says that debt collection scams have been the biggest problem in the state.

“It doesn’t mean that because you owe something, you need to pay or wire money right away,” she said. “You need to ask first for documentation.”

Alvaro Puig, FTC’s consumer education specialist based in Washington, D.C., says that about $1.6 billion was lost to scams last year. Nationally, the FTC received a total of 500,000 scam-related complaints.

“They [scammers] are very good— and it’s like the Game of Whack-A-Mole,” he said. “Unfortunately, if the person has wired money, it would be gone.”

Immigrants, especially those who have recently arrived in the country and have limited English language skills, tend to be more prone to scams, according to immigrants rights groups. 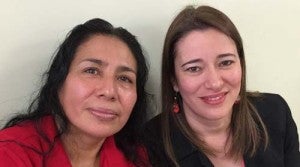 Houston resident Maria Veliz, pictured with consumer protection attorney Sonia Lopez, thought she was buying a house, only to find out that the payments were actually going to another property. PHOTO BY ANTHONY ADVINCULA

“It’s very easy for them to fall for scams and very difficult for them to approach the authorities,” said Wafa Adbin, vice president for immigration and legal services of Catholic Charities of Houston’s Cabrini Center of Immigrant Legal Assistance.

Abdin recounted the case of a Latina woman who went to a notario, or a non-licensed immigration consultant. The consultant filed a green card application for her, although she had been in the country with no legal documents.

Her application alerted the U.S. Citizenship and Immigration Services (USCIS) about her undocumented status. Eventually, immigration officials denied her green card application and she was put in removal proceedings.

Adbin says she also sees notarios promising to help people with applications for programs that don’t exist yet – like Obama’s executive actions on Deferred Action for Parents of Americans (DAPA) and expanded Deferred Action for Childhood Arrivals (DACA), both of which are still pending in court.

“Just recently, about 450 people were standing outside our door,” she said. “We told them there’s no application process to be filed for them because it hasn’t happened yet.”

Maria Veliz and Jorge de Leon live in the same neighborhood in Houston. Speaking through a translator, they said that each of them bought a house for their own family and started paying for their monthly mortgage and interest rates.

But now they are both facing eviction. It turns out that they were paying for a property that they didn’t own.

“We worked so hard to get a house,” Veliz said. “But now we don’t know what is going to happen. It’s terrible.”

According to Sonia Lopez, consumer protection attorney for Lone Star Legal Aid, because Veliz and De Leon did not fully understand how to read the contract, they have been paying for a different property—not the one that they thought they bought. She says her organization has seen similar types of predatory lending in vulnerable communities.

“It’s very difficult to know about these things [lending terms and contracts],” De Leon said. “But there’s help if you call someone from your community. There’s hope.”

This story is part of a series of ethnic media roundtable discussions on consumer scams across the United States, conducted by New America Media, in partnership with Federal Trade Commission and other law enforcement agencies.