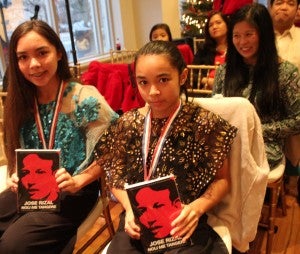 Rizal Youth awardees Regina (left) and Rebecca Verba Honigford show their copy of Rizal’s “Noli Me Tangere,” presented to them at the awards ceremony, while their mother, Luzviminda, (behind) beams with pride. PHOTOS BY JON MELEGRITO

WASHINGTON, D.C.–American-born Nicholas Manalac of Clifton, Virginia, never heard of Dr. Jose Rizal before, let alone the Philippine national hero’s position on gun control, but the 10th grader believes Rizal’s “desire for the betterment of the people as a whole would translate into strict control over guns.”

In an essay written as part of his application for the 23rd Annual Dr. Jose Rizal Youth Awards, held recently at the Philippine Embassy, 15-year-old Nicholas states that “it’s easy to think how he would want people to be able to defend themselves readily with firearms.” But, he concludes, “I believe he would work towards more secure regulations on guns so that people would be safer in society.”

Nicholas was one of 13 young Filipino American students recognized for their academic excellence and community service by the Philippine Embassy and the Philippine American Foundation for Charities (PAFC), co-sponsors of the annual community event. He read his response to the essay question, “Ever the man of peace, how would Dr. Jose Rizal resolve the issue of gun violence in the U.S.?” at the December 17 awards ceremony attended by Philippine Ambassador Jose L. Cuisia, Jr. 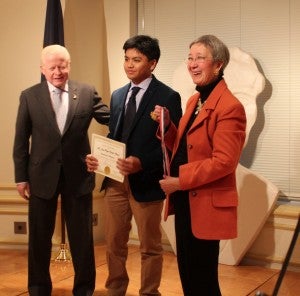 Fourth-grader Rebecca Verba Honigford, 10, of Vienna, Virginia also read her essay, “If Dr. Jose P. Rizal could put on his Batman suit, what do you imagine his first big task?” Rebecca’s response: He would “ensure there was equal treatment of people in his beloved country” and he would “peacefully eliminate the world of villains.”

For her part, Bowie State University graduate Jenniber Marie Palo, 23, shared her thoughts on Rizal’s opposing views regarding the Katipunan. “To say that he solely believed in the power of the pen and not the sword is an unfair judgment,” Jenniber argued. “Whether he picked up only one over the other does not mean he deemed the other one unnecessary. In fact, when Dr. Pio Valenzuela sought his advice in Dapitan regarding the revolution, he simply responded that it was not the right time; they lacked weaponry and thus they were not ready. Countless documents can provide evidence of his support for both peaceful and armed struggles. What sets his views apart from the KKK is that he preferred the former before the latter. Before resorting into a blind bloodshed, he strategized breaking the cycle of violence and educating the Filipino people to outsmart their way to freedom.” 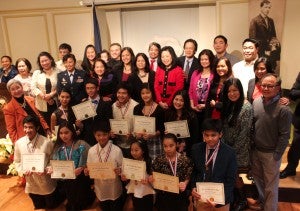 Rizal Youth awardees and their families are all smiles at the conclusion of the awards ceremony held at the Philippine Embassy.

Jenniber, who currently teaches social studies in a public high school, concluded: “He did not merely choose a pen over the sword; rather to sharpen the sword with a pen. This is what made him the national hero of the Republic of the Philippines.”

Essays were required in the selection process for students from 4th grade through college.

In her keynote address as inspirational speaker, Col. Shirley S. Raguindin, Chief Diversity Officer at the U.S. Air National Guard Bureau, applauded all the awardees for their accomplishments. “With this honor, you need to understand what this award means to what you are today and where you want to be tomorrow,” Raquindin said.

She added, “You are the future’s emerging leaders. Earning top grades in school is significant. But like Dr. Rizal, you must learn to lose yourself in the service of others. You stand on the shoulders of giants like him. Continue to strive for excellence by always respecting the leaders in our past who sacrificed and gave back to our country.” 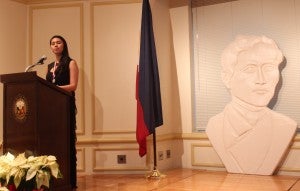 Jenniber Marie R. Palo reads her essay about Rizal’s views on the Katipunan during the awards program

To explain her point further, Raguindin shared a quote from a South African boy, Nikosi Johnson, who died of AIDS at age 11. “Do what you can in the time that you have, in the place that you are.”

Citing her own personal story, Raquindin recalled how, after graduating from high school in Hawaii, she defied her parents because she wanted to pursue her dream of going to the Air Force Academy, rather than marry someone chosen by her parents.

“Don’t let anybody tell you what you want to do,” she said. “And don’t ever set your goals low. Like Rizal, always aim high in your studies and in your career.” Raguindin’s personal story is among a collection of stories by 35 women published by the Filipino Women’s Network. Titled DISRUPT: Proud. Loud. Leading Without a Doubt, the book features successful Filipina women talking about the meaning of their leadership experience as they navigated the corporate cultures in the global workplace.

Raguindin, an adviser to three-star and four-star generals who are responsible for the military readiness of 485,000 soldiers, airmen and civilians, wrote in her DISRUPT essay: “Beating the odds is not about poor conditions but about mindsets. The only barriers to goals in life are not the ones created by others; but the ones we create in ourselves.”

The role of parents

Rafael and Priscille Manalac, parents of Nicolas, were among dozens of family members who attended the awards program. Upon hearing of the Rizal Youth Awards earlier this year, they encouraged Nicholas to apply. 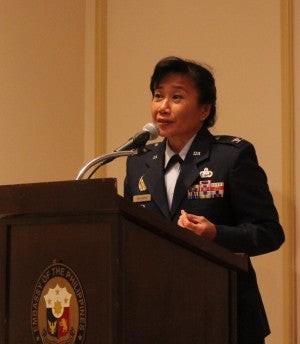 Col. Shirley S. Raguindin challenges Filipino American youth to aim high in their studies and in their chosen careers.

“At first he didn’t see any value in it,” recalls the father. “But after reading a biography of Rizal, which we bought for him, he really got into it. We were pleasantly surprised how he’s able to quickly grasp Rizal’s concepts and how well he articulated his own ideas.”

In his essay, Nicholas, who has been thinking of becoming an educator, describes how Rizal fought oppression from Spanish rule through non-violent means: “Jose Rizal did not fear those with guns, that he did not see them as useful tools other than for the senseless killing of men, and that he wanted the people to know he saw the firing squad as a cowardly method of execution.”

The Manalacs, who immigrated to the U.S. in 1990, are delighted there is a program in the community that encourages Filipino American youth to learn more about Rizal. “It’s a good way for our children who are born here to learn about Philippine culture and history,” the elder Manalac said.

“We don’t want them to forget where they came from. We also want them to keep up with current events, like listening to the presidential debates on TV, keeping an open mind and speaking for themselves,” he added. 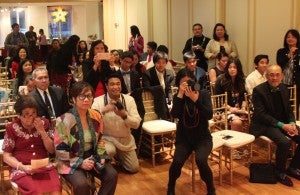 Community leaders and families of Rizal Youth awardees take pictures of their children as they receive their certificates from Amb. Jose L. Cuisia.

Manalac is chief financial officer of a community music school while his wife is a registered nurse. They have another son, 18-year-old Alex, a freshman at George Mason University.

In setting the tone for the awards ceremonies, Ambassador Jose L. Cuisia, talked about Rizal’s life and urged the awardees to continue learning more about the hero after whom the award is named.

“Jose Rizal’s accomplishments were never achieved before by a Filipino during that time. He realized his potential and he never allowed life’s hardships to stop him from serving his family, fellow men and country. His poem ‘To the Filipino Youth’ appeals to the youth of the past, the present and the future to realize their dreams and be the best that they can be in the service of the greater good,” said Cuisia.

He added, “I strongly encourage all of you, especially as Rizal Youth Awardees, to learn more about our national hero by studying his life and reading his works.”

DPWH to convert public buildings as quarantine sites in 10 days