PH is an early favorite in Miss Universe pageant 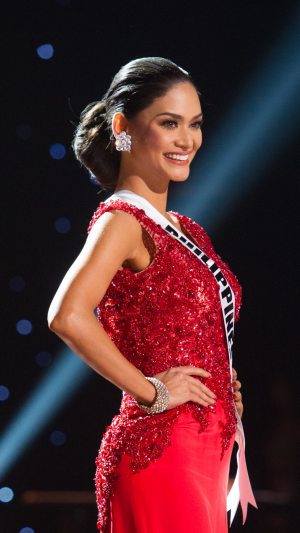 LAS VEGAS—Throngs of Filipinos from around the world are descending on Las Vegas this week and Manny Pacquiao has absolutely nothing to do with it. It’s the 2015 Miss Universe pageant, and the Philippine bet, Pia Alonzo Wurtzbach, is getting a lot of attention from the press and her diehard supporters.

“All the 80 contestants have equal bearing, but the one thing that makes Miss Philippines stand out from the rest is not only her dedication to win the title, but [also] to be the face of Miss Universe that the organization is looking for,” said Filipino singer-comedian Divo Bayer who flew in from the Bay Area.

New York-based LGBT rights advocate Chelle Lhuillier could not agree more, adding that Wurtzbach exudes the beauty and grace of a winner when she walks on stage. “It’s as if she’s taking a victory walk for her fans,” Lhuillier said.

Wurtzbach, 26 years old and half German, calls Cagayan de Oro her hometown. She and delegates from all 79 countries arrived in Las Vegas on December 1 and have been touring, filming and rehearsing for the upcoming final night at Planet Hollywood’s The Axis auditorium. 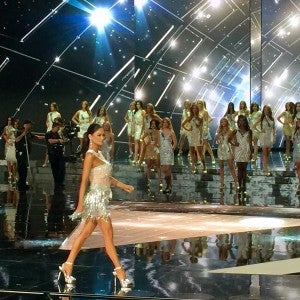 “We’ve practiced everything already, making sure that we all know our blocking and where the cameras are going to be at any point of the pageant if we’re selected for the 15, the 10, the 5 or the 3,” Wurtzbach told INQUIRER.net in an interview during a break from rehearsals Saturday afternoon. “It’s basically just polishing, making sure everything’s going to be perfect for the show.”

When asked if she’s prepared for the competition, she said with confidence: “After three years of preparation, I think I’m on the right track.”

“So far, I’ve been getting good feedback from the people and my mentors as well, so I know I’m doing a good job,” she added. 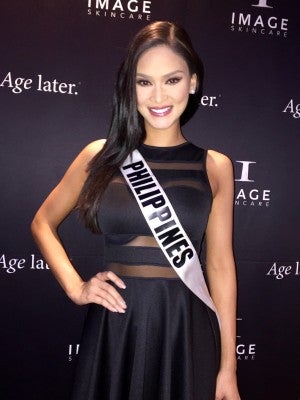 Wurtzbach explained that in order to become deserving of the Miss Universe title, one must not only be graceful, confident and poised.

“Being a Miss Universe, you’re not just beautiful. You also have to have substance and most importantly, a genuine heart. You have to be really interested in other people, be compassionate,” she said.

“Now, what they’re really looking for is the total package. It’s not enough that you’re beautiful—we’re all beautiful, [after all] we all won in our respective countries. But what will make a Miss Universe really stand out are her personality and her heart,” she added.

This year marks the first time that Binibining Pilipinas Charities used a Filipino talent to design the national costume and evening gown of the country’s representative.

Dubai-based designer Albert Andrada, who was selected for the job, told INQUIRER.net that he drew inspiration from the sea in crafting the national costume.

“The story behind Pia’s wardrobe is [about the] richness of the Philippine sea and the infamous headdress was inspired by the carnival queen of the 1900s, it’s made with cadiz shells and pearls,” he said. 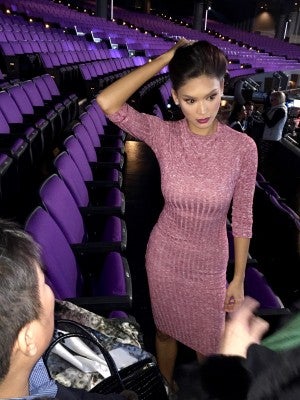 Pia taking a breather in between rehearsals. PHOTO BY ELTON LUGAY/INQUIRER

The evening gown for the pageant’s final night, also inspired by the Philippine sea, is colored blue, said Andrada.

This is Andrada’s first time to work with Wurtzbach and he has very high expectations for her. “I have high hopes for Pia because she’s a very strong person, she’s really trying hard to give her 100-percent best and she’s been preparing for a long time. She’s one of the early favorites, and I’m sure she’s going to make it with all the supporters, with all Filipinos coming from different states and different countries.”

Wurtzbach also hopes for a happy ending to her pageant journey.

“Since the first time I set foot in the Philippine pageantry, I’ve always been transparent with my thoughts, with my training and with what I’m doing with my life,” she told INQUIRER.net when asked about something that would surprise people to know about her.

“I don’t think there’s anything that I’ve kept from the public eye. I’ve been very open with my journey, and I think that’s what makes me relatable to so many people—because they see my journey from start to finish.”

Read Next
6 Pinoys rescued from Indonesian waters after ship collision discharged from hospital – DFA
EDITORS' PICK
House energy committee chair Arroyo bats for cheap electricity
vivo’s coming to town to grant wishes with more holiday promos
Pagasa: Warm, sunny Sunday in most parts of PH
EDITORIAL: To a bike-friendly future
The Best Tech Gifts For The 2022 Holidays
Is it safe to talk politics again at family gatherings? ‘The Reconciliation Dinner’ shows us what that’s like
MOST READ
LOOK: Vhong Navarro transferred to BJMP detention facility in Taguig
The Elephant Man in the Senate
Posh village as ‘shabu’ haven
LOOK: Zanjoe Marudo bonds with Ria Atayde, her family
Don't miss out on the latest news and information.