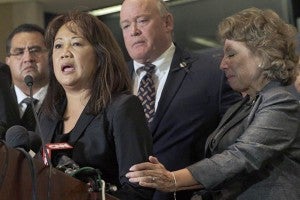 LOS ANGELES–As investigation of the December 2 shootings in San Bernardino, California continues, survivors of the attacks carried out by a radicalized Muslim husband and wife are beginning to speak out, including a Filipino American county health official.

“I was under the table with some of the staff and we just kind of held on to each other. I think just instinct kicks in, adrenaline kicks in,” said Fil-Am survivor Trudy Raymundo, the chief director of the San Bernardino County Public Health Department, which was celebrating a holiday party for the Environmental Health Services division on the morning of the attacks.

Speaking to CNN’s Anderson Cooper, Raymundo shared the terrifying experience when Syed Rizwan Farook and his wife, Tashfeen Malik, burst into the conference room of the Inland Regional Center, guns blazing. She and her assistant director, Corwin Porter, had planned to speak to the department employees about the year’s accomplishments and upcoming goals at the party. According to reports, the event was also supposed to be a celebration for another employee, well inspector Julie Paez, who was going to be named Employee of the Year.

Following the massacre, where 14 people were killed and 21 wounded, Farook and Malik escaped in a black SUV and were killed by police hours later in a shootout.

“I was at the table getting coffee and checking out the goodies that were sitting there. And it was that point in time, you know, when we all heard gunfire right outside the door and all turned to look at the door to watch [Farook] come in,” Raymundo said. “People throughout the room went diving under tables set up for the holiday meal.”

Officials said the couple, who were both dressed in black tactical clothing and carrying AR-15 rifles purchased by a friend of Farook, fired 65 to 75 rounds.

“It seemed like it was forever,” Raymundo, who had been appointed Public Health Director in early 2012, said. “He burst through the doors, firing and walking toward the middle of the room, just indiscriminately.”

“As it goes on, desperation kicks in and I kept hoping, it’s an exercise, right? It’s an exercise because this actually can’t be happening. And all I could think of was, ‘Why doesn’t he stop? Why does he keep shooting?’”

After the rampage, Raymundo recalled emergency responders arriving on the scene. “The police were telling everyone, ‘If you’re not injured, get out.’ We weren’t going to leave anybody behind, and so we went out as a group. We tried to help those that we knew were injured. We needed to get them to safety…we needed to take care of them.”

“We made sure all of our staff had that training,” said Porter. “It was pushed out county-wide that we have this training for all of our staff just in the event that something might happen. And so they responded quite well. Those who had something to hide under tried to find protection right away.”

Police said an altercation between Farook and another employee might have sparked the shooting, but have played down that possibility, saying most witnesses said they did not hear an argument.

Farook’s co-workers in the environmental health division said they had thrown him a baby shower about six months earlier, when his daughter was born.

“It’s a complete sense of betrayal,” Raymundo told ABC News. “It amazes me every day how close this group is, how tight-knit they are, and it’s nothing but betrayal.”

“The fact that they gave him a baby shower is just indicative of the whole group. That’s how they treated everyone,” Raymundo added.

“I want to make it clear that this is a very tight, close-knit group,” she said of her colleagues, according to Inquirer.net. “They have always supported each other. They are beyond co-workers. They are friends and they are family. We are holding onto each other right now and will continue to protect each other through what will be unimaginable weeks and months ahead.”

Raymundo also thanked law enforcement officials and medical personnel for their immediate and professional response to the emergency. “I want to thank all of the first responders and all of the EMS personnel who were treating our injured and wounded…I want to thank the incredible outpouring of support nationally and internationally…we have received your offers of condolences and help, and we are grateful for them.”

In an emotional press conference, she asked people to join in mourning “the loss of our colleagues, of our friends, of our families and our loved ones.”

“I ask that you come together and hold each other strong, because it is this strength that will help us heal. And I want you to every day be grateful for those of us that were spared, those that are still with us today.”

As a wounded San Bernardino continues to heal, staff members in the environmental health division, as well as in the Inland Regional Center, will return to work next week. Security has heightened in nearby county department buildings, which have already reopened.

Funerals, tributes and memorial services for the victims continued over the week, as investigators spent another day searching for possible evidence and questioning suspects.

Officials have also looked into Enrique Marquez, Farook’s friend and next-door neighbor who acknowledged that he legally bought the two AR-15 guns for Farook several years ago, in an effort to cover his tracks.

Marquez also admitted to investigators about a plot that he and Farook conceived, but did not carry out due to fear, in 2012. Investigators are still trying to corroborate information and other potential suspects, and have not verified details of the alleged plot.

Marquez, 24, has not been charged with any crime, and has told investigators that he did not know about the couple’s plans for the attack at Inland Regional Center.

On Dec. 10, an FBI dive team searched for electronic devices or other evidence possibly left by the couple in San Bernardino’s Seccombe Lake, reported the Los Angeles Times. The search is still ongoing. Investigators are also looking at the couple’s digital electronics, which were found in their Redlands home, leading FBI to believe the shooters were planning an even larger assault.

“There is no belief that there is anything dangerous as a result of this case in this place,” said David Bowdich, assistant director of the FBI’s Los Angeles branch office.

Officials do not know if the attack was directed by an overseas terrorist organization like the Islamic State, but believe the Muslim couple was “self-radicalized and inspired…than actually told to do the shooting.” Malik had pledged allegiance to an Islamic State leader on her Facebook.

“I felt very much demoralized,” Mustafa Kuko, director of the Islamic Center of Riverside, told NBC News. “Let’s be frank—these days when a Muslim does something wrong…all of us are going to be implicated in it.”

Muslims United for San Bernardino raised more than $180,000 in funds to help the families of the shooting victims.

“To simply say that we love you from the bottom of our hearts and they should know that they are not alone in this calamity. We share their sorrow,” said Shakeel Syed, executive director of the Islamic Shura Council of Southern California.

Members of a mosque in Culver City said the fundraising is an example of what Muslims believe. Abdel Hamil Barraj said Muslims are peaceful Americans.

“There’s a minority that are calling for violence and all of that. We don’t go with it. We’re against it, all the way,” Barraj said.

In Corona, the Islamic Society of Corona-Norco, which condemned the attack, hosted a dinner program and evening of prayers on Dec. 11 with residents, law enforcement and public officials.

“We extend our heartfelt condolences and prayers to the families and loved ones of all those who lost their lives and ask Almighty God to grant full recovery to the injured,” the organization said in a statement. “The Muslim community stands shoulder to shoulder with our fellow Americans in repudiating any twisted mindset that would claim to justify such sickening acts of violence. We encourage everyone to be extra vigilant.”