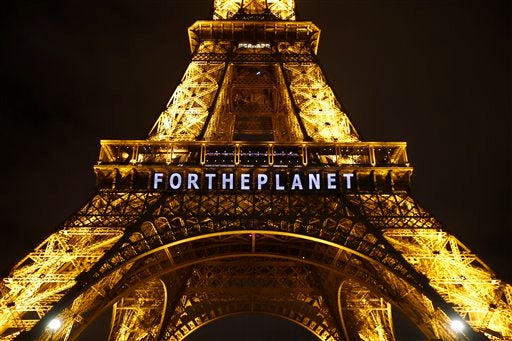 The slogan “FOR THE PLANET” is projected on the Eiffel Tower as part of the COP21, United Nations Climate Change Conference in Paris, France, Friday, Dec. 11, 2015. AP

LE BOURGET, France—French leaders touted a draft climate deal to slow but not stop global warming, announcing what they call an ambitious but realistic compromise on Saturday outside Paris.

After years of gridlock, world leaders hoped the unprecedented pact would be approved by nearly 200 nations later in the day.

French Foreign Minister Laurent Fabius, the host of the talks, said the pact would aim to keep the rise in global temperatures by the year 2100 “well below” 2 degrees Celsius compared with preindustrial times and “endeavor to limit” them even more, to 1.5 degrees Celsius.

That was a key demand of poor countries ravaged by the effects of climate change and rising sea levels.

French President François Hollande, who joined the meeting on Saturday to add weight to the negotiations, called the proposal unprecedented.

“The decisive agreement for the planet is here and now,” Hollande said. “France calls upon you to adopt the first universal agreement on climate.”

The draft, completed after negotiations that stretched through the night, was being translated before being presented to international delegates.

Delegations then had a few hours to study it before it goes to a plenary meeting for eventual adoption.

French leaders and United Nations Secretary General Ban Ki-moon praised both the draft accord and themselves for what if approved would do what delegates failed to achieve at their last summit in Copenhagen in 2009.

“We must protect the planet that sustains us,” Ban told the negotiators. “We need all our hands on deck.”

If the 190 nations gathered in Paris agree to an accord, it would be a breakthrough.

The United Nations has been working for more than two decades to persuade governments to work together to reduce the man-made emissions that scientists say are warming the planet.

US Secretary of State John Kerry was working at the talks to strike compromises with developing nations such as India to ensure a deal that satisfies the Obama administration’s hopes for an agreement that the United States can sign on to without congressional approval.

He said he believed the pact would be adopted on Saturday.

“It should be good but we’ll see. Little things can happen but we think it’s teed up,” Kerry told reporters.

Even before the draft was released, delegates were optimistic that it would strike a good balance between the demands of the different participating nations.

Prime Minister Enele Sopoaga of the Pacific island nation of Tuvalu was upbeat.

“The signals that have come to me give me encouragement that we are going to have a very … comprehensive and strong agreement in Paris,” he told Associated Press.

Already, the world has warmed by about 1 degree Celsius, and poor low-lying nations and environmental groups have pushed to keep a goal of 1.5 degrees in the text.

“Even at 1.5 degrees, scientific consensus tells us very many of us will not be safe,” Giza Gaspar Martins, the Angolan chair of the Least Developed Countries negotiating group, said in a statement on Saturday.

Limiting warming to 1.5 degrees instead of 2 degrees could potentially cut in half the projected 280 million who live on land that would eventually be submerged by rising seas, according to Ben Strauss, a sea level researcher at Climate Central.

The talks were initially scheduled to end on Friday. UN climate conferences often run over time, because of the high stakes and widely differing demands and economic concerns of countries as diverse as the United States and tiny Pacific island nations.

This accord is the first time all countries are expected to pitch in. The previous emissions treaty, the 1997 Kyoto Protocol, included only rich countries and the United States never signed on.

More than 180 countries presented plans to cut or curb greenhouse gas emissions in the run-up to the conference. That was a major breakthrough for the climate talks, showing almost all countries were ready to be part of the new deal after years of stalemate.

READ: Nearly 200 nations near a deal to slow global warming

But disputes arose in Paris over how to anchor those targets in a binding international pact, with China and other major developing countries insisting on different rules for rich and poor nations.

The United States resisted legally binding emissions targets because of opposition in a Republican-controlled Congress. Instead US negotiators wanted robust transparency rules to make sure countries live up to their commitments. China pushed back, saying Western proposals were too “intrusive.”

Saturday’s deal would also mean mobilizing a minimum of $100 billion a year from 2020 to help the developing world cope with global warming, Fabius said.

Quite important, a new figure for the financing would be set by 2025, he said.

Fabius said the overall agreement would be “legally binding.”

Developed and developing nations have failed for decades to sign an effective universal pact to tame global warming and shore up defenses against its impacts.

They have been badly divided over how much responsibility each side must shoulder, an issue touching on interests worth trillions of dollars.

At the heart of any deal is cutting back or eliminating the use of coal, oil and gas for energy, which has largely powered nations’ paths toward prosperity since the Industrial Revolution began in the 1700s.

The burning of fossil fuels releases greenhouse gases, which cause the planet to warm and change Earth’s delicate climate system.

If climate change goes unabated, scientists warn of increasingly severe droughts, floods and storms, as well as rising seas that would engulf islands and populated coasts.

“Climate change represents an urgent and potentially irreversible threat to human societies and the planet,” said the preface to an earlier version of the planned agreement.

Developing nations have insisted rich countries must shoulder the lion’s share of responsibility for tackling climate change as they have emitted most of the greenhouse gases since the Industrial Revolution.

But the United States and other rich nations say emerging giants must also do more.

They argue that developing countries now account for most of today’s emissions and thus will be largely responsible for future warming.

Rich countries promised six years ago in Copenhagen to muster $100 billion a year by 2020 to help developing nations make the energy shift and cope with the impacts of global warming.

But how the funds would be raised remain unclear going into the Paris talks, and developing nations demanded clarity in the new accord, which would take effect from 2020.

Developing countries also demanded a commitment to increase the amount after 2020. Reports from AFP, AP