Bonifacio: The man who would be king

NEW YORK CITY—I recently attended a screening of Bonifacio: Ang Unang Pangulo (Bonifacio, The First President) at the Philippine Center on Fifth Avenue. Produced by the same folks behind the highly successful Heneral Luna and with Robin Padilla in the role of the revolutionary and founder of the Katipunan, the film fared poorly at the box office when it was first released in 2014.

But due to the record-setting triumph of Heneral—nine weeks onscreen in Metro Manila and three weeks here in the U.S. as well as being the country’s official entry to the Oscars for Best Foreign Language Film—the producers believe a renewed interest in revolutionary history might provide a healthier box office this time around.

Directed by Enzo Williams, the film switches back and forth between the present, where a high school class is learning about the 1896 Revolution against Spain, and the revolution itself, the narrative centered on Andres Bonifacio and key historical personages, including José Rizal and Bonifacio’s soon-to-be rival Emilio Aguinaldo.

Three high schoolers (with Daniel Padilla, Robin’s nephew, as the lead in this segment) visit the Museo ng Katipunan, where the resident scholar/curator, played by Eddie Garcia, fills them in on the background of El Supremo, as Bonifacio was referred to by the Katipuneros. The Garcia character tells the students that the Tondo-born firebrand should be considered the first president of the Philippine Republic, rather than Aguinaldo, the middle-class landowner from Kawit, Cavite. 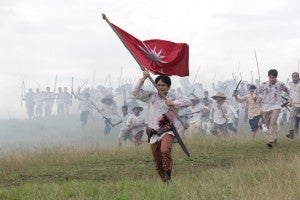 Bonifacio proves to be somewhat heavy-handed in its portrayal of the man who would be king, likely due to the heroics expected from a movie star such as Padilla, best exemplified by an extended swashbuckling scene: Padilla-as-Bonifacio engages in a mano a mano with a Spanish officer. The action goes back and forth, with acrobatic thrusts and lunges by both combatants, and of course there is the de rigueur moment where the hero nearly gets skewered but instead triumphs and slays the officer. This is the thunder that Padilla fans expect, and he does not disappoint.

But the film fails to delve into Bonifacio’s interiority, admittedly not easy to portray cinematically, but that’s where the artistic imagination kicks in. Instead what we get is a rather conventional portrait of The Hero. You wouldn’t know it from the film but Bonifacio was an avid reader and followed the Propagandists’ writings. He possessed Rizal’s novels, Victor Hugo’s Les Miserables, and texts on the French Revolution, among other books. Padilla is talented enough for the director to have pushed him in what might have seemed to be a counterintuitive direction but would have in fact revealed a more complex side of this historical figure, at once inspirational and intensely dedicated to freedom but ineffective as a military strategist and naïve politically.

In this telling Aguinaldo is a decidedly minor figure even though the film portrays him as ordering the arrest of the Bonifacio brothers and subsequent execution. As in Heneral Luna, Aguinaldo rarely speaks and lets others act as his mouthpieces.

Was Andres Bonifacio in fact the first president?

I am afraid I don’t buy it.

As sympathetic and charismatic a figure as Bonifacio was, there is scant evidence to support this assertion. We may wish that such a noble character, or a man certainly nobler and purer than Aguinaldo, had come out on top in what was essentially a power struggle. But alas the latter proves to be more effective in the field and thus the elections are held on his turf. It comes as no surprise then that he tops the balloting. Bonifacio declares the whole process null and void, but that’s only because an ilustrado member of Aguinaldo’s staff insults him due to his limited schooling.

The film’s thesis is provocative, certainly, and one that has generated considerable debate and will no doubt continue to do so. Whatever the faults of the film, which are many, it does force the viewers to revisit history and reexamine closely held assumptions—a necessary task that every generation should undertake. In this regard, I am not encouraged by the fact that apparently many students who saw Heneral Luna were wondering why Apolinario Mabini never even stands up in the film, being unaccountably and blissfully unaware that Mabini was also known as the Sublime Paralytic.

Even more discouraging, and well within living memory, is the recasting of the Marcos era as a period when goodness reigned over the land and every family had adobo in their pots. The inconvenient truths of Ferdinand and Imelda’s conjugal dictatorship—the brutal suppression of civil liberties, the extrajudicial killings, the plunder of public monies, the debilitating increase of the national debt, among others—are simply brushed aside. In the guise of setting the record straight, these revisionists seek to deepen the collective amnesia that afflicts the body politic and condemn a nation to repeat history.

For areas to go back to ECQ is not wise, bad for business — Palace adviser