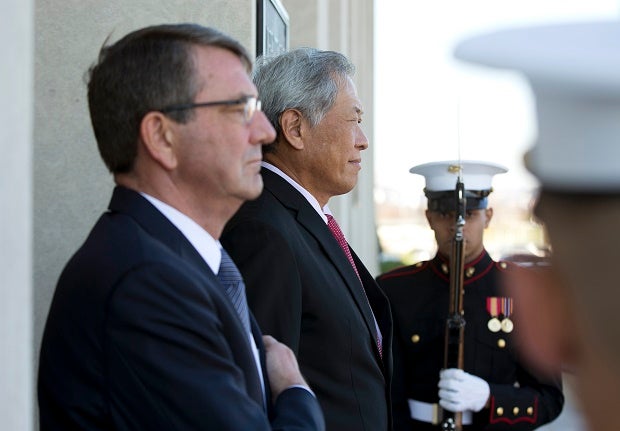 Secretary of Defense Ash Carter, left, and Singapore’s Minister of Defense Ng Eng Hen, stand on the steps of the Pentagon as the national anthem of Singapore and the United States are played during an honor cordon, Monday, Dec. 7, 2015. AP Photo

WASHINGTON, United States—Singapore’s defense minister said Wednesday that Islamic State of Iraq and Syria (ISIS) fighters pose a “clear and present danger” to Southeast Asia as they return from Syria and Iraq with a mission to establish a caliphate.

He said that in the past three years, ISIS and its ideology have attracted more followers in Indonesia, Malaysia and Singapore than al-Qaida drew in the 10 years after the Sept. 11 attacks in the United States.

Malaysia has reported up to 150 foreign fighters going to Iraq and Syria, including some from the Malaysian armed forces, Indonesia has reported more than 500 and a few have traveled from Singapore, Ng said.

“The returned fighters have come back with allegiance to ISIS and the mission to form an Islamic caliphate in our part of the world,” Ng said, using an alternative acronym for the ISIS group.

“They have sympathizers, they have foreign fighters who are trained, who have the motivation, the means, and who have a common vision,” he said.

He stressed the importance of intelligence-sharing among countries in the region to address the threat, while expressing concern that followers of al-Qaida-linked groups in Southeast Asia that had pledged allegiance to IS would now link up.

In the years after Sept. 11, 2001, members of the Jemaah Islamiyah network plotted attacks in Southeast Asia, particularly in Muslim-majority Indonesia, where the 2002 Bali bombings that killed 202 people, mostly foreign tourists. The Abu Sayyaf militant group has remained an active but diminished force in the southern Philippines.

Ng spoke at an event organized by the Center for a New American Security, a Washington think tank.