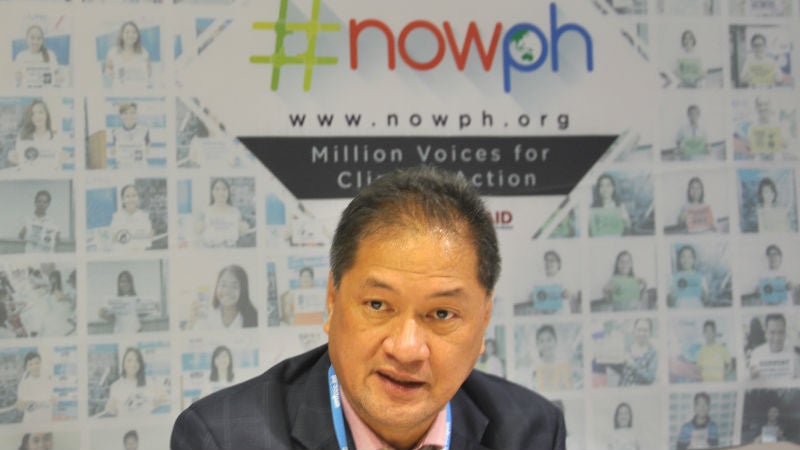 Dean Tony La Viña, spokesperson of the Philippine delegation to the 21st Conference of Parties. Photo by Sara Pacia/INQUIRER.net

PARIS — In several hours or so, President Benigno Aquino III will receive a report from the Philippine delegation in this city on a draft treaty that will address the global issue of climate change.

Tony La Viña, delegation spokesperson, said they will send their briefer on the 21st Conference of Parties (COP21) to Aquino on Wednesday evening or Thursday morning to get his opinion on the draft text of the agreement.

The agreement, which should be finalized by Friday, details measures on how to address climate change, including limiting the rise in global temperature.

“We’ll try to send it tonight actually to get guidance. We’ll send questions we want the President to weigh in if he wants to weigh in. (We’ll get feedback from the) President and ES (Executive Secretary) and the other members of the Cabinet cluster,” La Viña said.

He told INQUIRER.net that the briefer will be sent by e-mail and that it will be up to Aquino if he will give Secretary Manny De Guzman, vice chair of the Climate Change Commission (CCC) instructions.

“That’s really standard for a treaty to get the President briefing on where we are. Because many things change. We only have 14 pages now from where we were before,” he explained.

“Sec. Manny will of course suggest, make recommendations on how to proceed. But it’s very important that the President has a chance to weigh in before we actually agree to the agreement,” he added.

The Philippine has taken on a leadership role in behalf of climate-vulnerable countries participating in the COP21. Aquino himself was invited to Paris for the opening ceremony where he gave a speech calling for actions to address climate change.

The Philippine delegation has been closely engaged in the negotiations as it pushes for the inclusion of human rights and the 1.5 degrees Celsius goal in the agreement.