Tracing the twists and turns of COP21 treaty-in-the-making 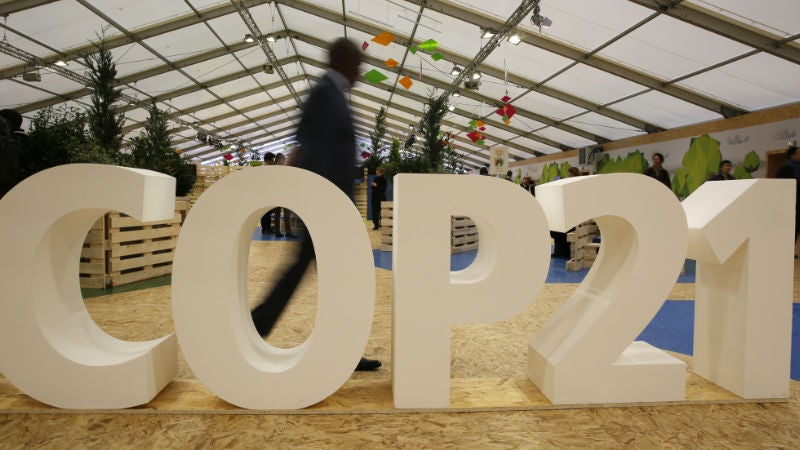 PARIS—The climate change talks in this city marked a surprising and substantial breakthrough on Saturday, raising hopes that negotiators from some 190 countries will succeed by the end of the week in forging a new “universal” and “legally binding” agreement to lower greenhouse gas emissions and stop planetary catastrophe.

But what, exactly, are they negotiating? The process is arcane and complicated, depends on the weight of both treaty-level rules and recent tradition, and follows the consensus-building framework of the United Nations. But the public can follow the negotiations in part by tracing the progress of key provisions over time. The Philippine delegation, for instance, champions several advocacies, including the integration of the human rights dimension in dealing with the effects of climate change.

“We should be joyful that we now have a final negotiating draft,” Sec. Emmanuel de Guzman of the Climate Change Commission, the head of the delegation, said in a briefing for Philippine media covering the talks. “This is really a momentous event, history unfolding right before your eyes.”

The delegation spokesperson, Dean Antonio La Viña of the Ateneo School of Government, noted that at the same stage in the Copenhagen negotiations in 2009 — the last time the international community attempted a new agreement — the negotiating draft was an unworkable 150-plus pages.

Much work remains ahead. Both privately and in public, members of the Philippine delegation recognize that the proposed new agreement is far from a done deal. But much progress has also been made, in the run-up to the Paris talks, and in Paris itself, in the first week of the negotiations. The breakthrough on Sunday came after a sluggish first four days.

The human rights principle, first raised last year by the Philippines in Lima, Peru, is an extension of the broader principle of climate vulnerability: Certain countries, sectors or demographic categories, despite having contributed the least to a warmer world, are at greater risk of the serious consequences of global warming. When “taking action to address climate change,” as the breakthrough draft says, the human rights of climate vulnerable people must be respected. The Philippines amped up the promotion of this human rights dimension when it became current chair of the Climate Vulnerable Forum, a growing “leadership and advocacy” group (but not a negotiating bloc) in the UN climate conference.

Tracing the twists and turns of the phrasing of this principle in the different drafts shows that the Philippines and CVF can already claim partial victory.

Last February, the so-called Geneva draft of the proposed new agreement was 86 pages long. By October, the co-chairs of the process had whittled it down to a controversial “non-paper” of 20 pages. Many negotiators criticized the text as biased, however. As a deliberate response to the controversy, negotiators released the Bonn draft in late October; it was 51 pages long.

That was the basic text that the negotiators started with when the 21st Conference of Parties of the United Nations Framework Convention on Climate Change, or COP21, began on Nov. 30.

The first pass, after four days of negotiations, ended up with a 50-page draft. The second, with 38. And then, unexpectedly, and virtually overnight on Friday, a final negotiating text of 21 pages was cobbled together and presented to the parties, in what is officially known as the Ad Hoc Working Group on the Durban Platform for Enhanced Action or ADP. At the closing plenary session of the ADP, the presentation was met with resounding applause.

The “Draft Paris Outcome” is made up of the 21-page text of the proposed agreement, which is what most people will refer to as the climate pact or treaty, and a 22-page “draft decision” adopting the agreement. Bracketed language punctuates most of the 21 pages; these are the still contentious provisions that the next level of negotiations, involving national agency ministers, will have to decide on. By Reuters’ count, 939 brackets still remain in the final negotiation text.

In the Geneva text of February 2015, the human rights principle is mentioned in Part A thrice, all of them in brackets:

“[Stressing that all actions to address climate change and all the processes established under this agreement should ensure [a gender-responsive approach] [gender equality and intergenerational equity], take into account [environmental integrity] [the protection of the integrity of Mother Earth], and respect human rights, the right to development and the rights of [youth and] indigenous peoples, [as well as the just transition of the workforce and the creation of decent work, in accordance with nationally defined development priorities and strategies,]

“[Recognizing that all actions on climate change shall significantly contribute to the post 2015 development agenda of the United Nations with a particular focus on human rights, good governance, gender equality and the needs of particularly vulnerable groups,]”

In Part C, which will later be classified as the objective or purpose part of the proposed agreement, it is mentioned once, as part of a third option. Very little of the language lies outside brackets.

“All Parties [and stakeholders] shall [ensure respect for human rights and gender equality in the implementation of the provisions of this Agreement] [, in all climate change related actions, respect, protect, promote, and fulfil human rights for all. All Parties shall be guided by gender equality and ensure the full and equal participation of women in all climate actions and decision making processes. All Parties should consider in their climate policies and actions a just transition of the workforce that creates decent work and quality jobs.]] [All parties shall implement this agreement, in line with the mandate principles and provisions of the UNFCCC, to protect the integrity of Mother Earth, respect and promote human rights, the right to development and the rights of indigenous peoples].

The Bonn text of October 2015 restores the concern with the human rights implications of climate change into the introductory paragraphs. It also inserts the phrase “people under occupation” in the human rights provision—a Pan-Arab code for the abject condition of Palestine under Israeli domination.

“Emphasizing the importance of respecting and taking into account [, subject to jurisdiction] [right to development,] human rights [including people under occupation], gender equality [and women’s empowerment], [the rights of indigenous peoples,][local communities,] intergenerational equity concerns, and the needs of [migrants] [particularly vulnerable groups] [people in vulnerable situations], [including people under [foreign] occupation,] women, children and persons with disabilities, when taking action to address climate change,” The human rights provision (“human rights for all”) is also restored in Article 2, in one omnibus paragraph. The entire passage, however, still remains in brackets.

“[This Agreement shall be implemented on the basis of equity and science, in [full] accordance with the principles of equity and common but differentiated responsibilities and respective capabilities[, in light of national circumstances] [the principles and provisions of the Convention], while ensuring the integrity and resilience of natural ecosystems, [the integrity of Mother Earth, protection of health, a just transition of the workforce and creation of decent work and quality jobs in accordance with nationally defined development priorities] and the respect, protection, promotion and fulfillment of human rights for all, including the right to health and sustainable development, [including the right of people under occupation] and to ensure gender equality and the full and equal participation of women, [and intergenerational equity].]”

In the first week of the Paris talks, the language of the human rights provision saw even more twists and turns. The Dec. 1 version of the Preamble remained unchanged from the Bonn draft; in the Dec. 3 version, though, the phrasing was finessed.

“Emphasizing the importance of promoting, protecting and respecting all human rights, including [to promote sustainable development, and] the rights of indigenous peoples, migrants, children, persons with disabilities and people in vulnerable situations and under occupation, as well as promoting health, gender equality and the empowerment of women, while taking into account the needs of local communities, intergenerational equity concerns, and the integrity of Mother Earth, when taking action to address climate change,”

In Article 2 of the Dec. 3 text, however, the paragraph containing the human rights principle was completely removed — raising fears among delegates from the Philippines and other CVF countries that no “operational” language in the main body of the agreement would complement the statement of principle in the Preamble.

The Draft Paris Outcome, as Saturday’s breakthrough text is referred to, used much of the same human rights language as the previous version of Dec. 3, but placed the “under occupation” phrase in brackets again.

“Emphasizing the importance of promoting, protecting and respecting all human rights, the right to development, the right to health, and the rights of indigenous peoples, migrants, children, persons with disabilities and people in vulnerable climate situations [, and under occupation,] as well as promoting gender equality and the empowerment of women, while taking into account the needs of local communities, intergenerational equity concerns, and the integrity of ecosystems and of Mother Earth, when taking action to address climate change,”

It bears noting, however, that the paragraph itself (No. 10 in the new Preamble) is itself not in brackets; this means no party any longer finds the language (except for the phrase “under occupation”) objectionable, and is an indication that the human rights principle that the Philippines has championed will be part of the final draft of the new agreement.

This too is a breakthrough.

The same cannot be said for the human rights provision in Article 2. The entire passage has been rendered in brackets.

“[This Agreement shall be implemented on the basis of equity and science, and in accordance with the principle of equity and common but differentiated responsibilities and respective capabilities, in the light of different national circumstances, and on the basis of respect for human rights and the promotion of gender equality [and the right of peoples under occupation].]”

It is possible that this entire paragraph will be moved to another part of the agreement, because strictly speaking it no longer belongs to an Article devoted to the objective or purpose of the agreement. But it is also possible that, during the ministerial-level negotiations this week, it too will be sidelined.

As with many other provisions — on limiting the rise of global temperature to “below 1.5 degrees Celsius;” on the contentious “loss and damage” framework, by which climate-vulnerable countries can demand financial help; on the most controversial articles on climate finance, and so on — the Philippines will be watching this bracketed paragraph in Article 2 very closely in the coming days.