In a first, CHR to probe global polluters for rights violations 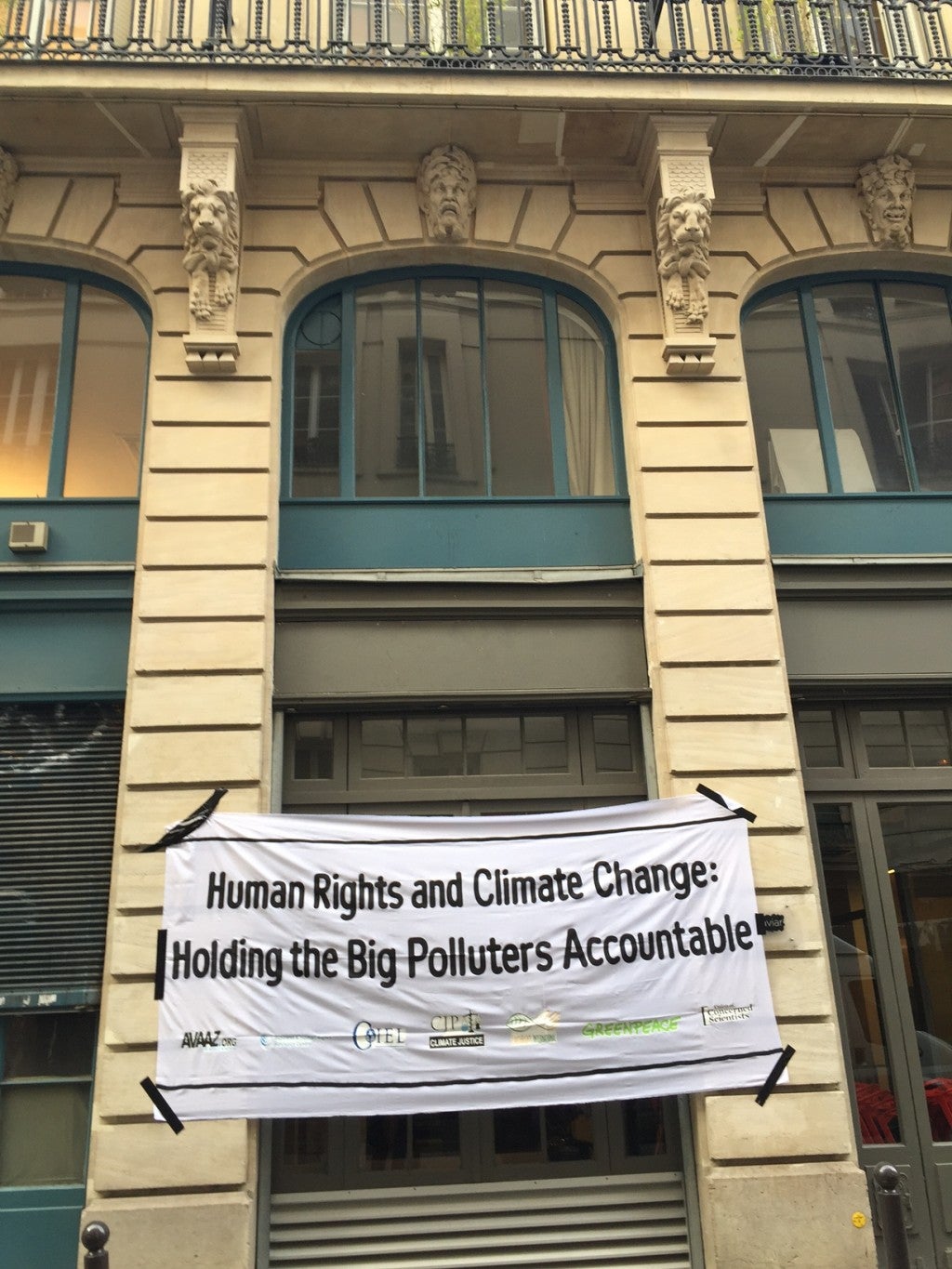 A large streamer outside the venue of the press briefing organized by Greenpeace International calls for corporate accountability. JN

PARIS — The Commission on Human Rights announced Friday that it will give due course to a petition filed in the Philippines by various environmental advocacy groups seeking an investigation of 50 international “carbon majors.”

In a move certain to raise the Philippines’ profile even higher at the ongoing climate change talks in this city, the CHR will investigate multinationals such as Chevron and Royal Dutch Shell for violating human rights through environmental pollution. The 50 majors are mostly in the oil, gas, and coal-extraction industries.

The legal action is the first of its kind in the world, and bears the promise, or the threat, of holding non-state actors proven to be responsible for emitting large amounts of carbon dioxide and other greenhouse gases to legal account.

Commissioner Roberto Cadiz said the CHR will commence the investigation of fossil fuel companies (identified in a scholarly study published in 2014 as carbon majors) on an appropriate date: December 10, Human Rights Day.

The CHR will work with United Nations human rights agencies to determine how to encourage the majors to respond to the lawsuit. In the Philippines, the constitutional body will consult the Climate Change Commission and other government agencies and to conduct public hearings and investigate human rights violations among communities placed at risk.

“This investigation is not just about how fossil fuel companies do business, but that they do business at all in the future. It’s time we held those to account who are most responsible for the devastating effects of climate change,” said Zelda Soriano, legal and political advisor at Greenpeace Southeast Asia.

Soriano said the petition includes, among other legal prayers, a demand that the CHR oblige the carbon majors to share their plans for mitigating the impact of their carbon-producing operations and another demand that the agency urge the Philippine government to provide human rights mechanisms for climate change victims.

“Why is this important?” Gregory Regaignon, research director of the Business & Human Rights Resource Center, answered his own question. “I can tell you that companies fear nothing more than a lawsuit.”

But he also said that recognition of the merits of the petition by “an authoritative body” like the CHR is “really path-breaking,” and would add pressure on the carbon majors operating even outside the Philippines.

At the press briefing, former senator Heherson Alvarez argued that decisions by fossil fuel companies were not anonymous or impersonal acts. “They’re made by executives, who know what they are doing. Should we not pinpoint their responsibility as well?”

Kumi Naidoo, executive director of Greenpeace International and the host at the press briefing, began the program by offering a hopeful perspective. “We are at that same moment in the anti-tobacco movement when many people pooh-poohed the fight” against tobacco companies. And look where we are now, he added.

The Philippines, as current chair of the Climate Vulnerable Forum, a key leadership and advocacy group within the UN climate change convention, has helped raise the concerns of the most at-risk countries at the highest levels; it is also one of those calling vigorously for a more ambitious reduction target of “below 1.5 degrees Celsius.”