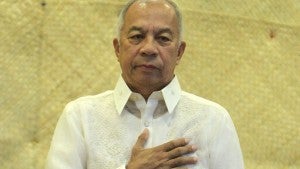 MANILA, Philippines — The Bureau of Customs has intensified further its campaign against the smuggling of Thai sugar – using China and Hong Kong as transshipment points – which has resulted in revenue losses to the government.

This was disclosed to the Philippine Daily Inquirer on Thursday by Customs Commissioner Alberto Lina shortly after he led the filing of smuggling charges before the Department of Justice against two trading firms for the illegal importation of the commodity.

But Lina was quick to add the Department of Finance-attached agency’s anti-smuggling drive has been a “work in progress.”

“We’re committed to protect the local sugar industry,” he said.

RHI and TGM officers were charged for alleged violation of Section 3601 of the Tariff and Customs Code of the Philippines (TCCP), Article 172 of the Revised Penal Code, and rules and regulations of the Sugar Regulatory Administration.

Section 3601 of the TCCP covers the illegal importation of, among others, commodities like sugar.

The shipments were “declared as bitumen (an oil substance used in asphalting roads and roofing), but found to contain refined sugar.”

On the other hand, one 40-foot shipping container, consigned to TGM, arrived at the MICP on May 15. The shipment was also declared as bitumen.

When interviewed, Lina said the filing of smuggling charges against the two firms was “proof of the BOC’s commitment to protect the country’s our sugar industry.”

He vowed to “intensify further the bureau’s campaign against the illegal importation of sugar in all ports nationwide.”

Customs personnel, including the bureau’s Intelligence and Investigation Service, have been “working closely with our partner non-government groups like the Sugar Alliance of the Philippines in this campaign,” he added.  SFM

Read Next
Laude lawyer mulls raps vs Pemberton guards
EDITORS' PICK
Complete your early Christmas shopping with vivo V25 Series
The vivo Y16 makes the season of giving more thoughtful for the whole family
What’s in a name? ‘Maharlika’ evokes time of mythmaking
House energy committee chair Arroyo bats for cheap electricity
Easterlies to bring rain in PH on Sunday — Pagasa
China’s Xi unwilling to accept vaccines despite threat from protests — US intel
MOST READ
Maxene Magalona sees separation from Rob Mananquil as ‘blessing in disguise’: ‘There’s no more anger’
What’s in a name? ‘Maharlika’ evokes time of mythmaking
Are we ready for a sovereign wealth fund?
NBA: Warriors use 3-point barrage to ground Rockets
Don't miss out on the latest news and information.